As we knew nothing about the history of Laos, we visited the small, but very informative museum of UXO Lao. UXO stands for unexploded ordnance (niet-ontplofte bommen) and there are a lot of them in Laos. In fact, Laos is the most bombed country in the world!! During the secret war, effectively the same period as the Vietnam war, the Americans dropped more bombs on Laos then on Vietnam all in the name of fighting communism even though Laos was a neutral country.

Two million tons of bombs (or 2.000kg per person) were dropped and a lot of these were cluster bombs. Cluster bombs are nasty as they are large bombs containing lots of little, often colourful bombs the size of a hand grenade that scatter the whole area as the big bomb opens up in mid-air. 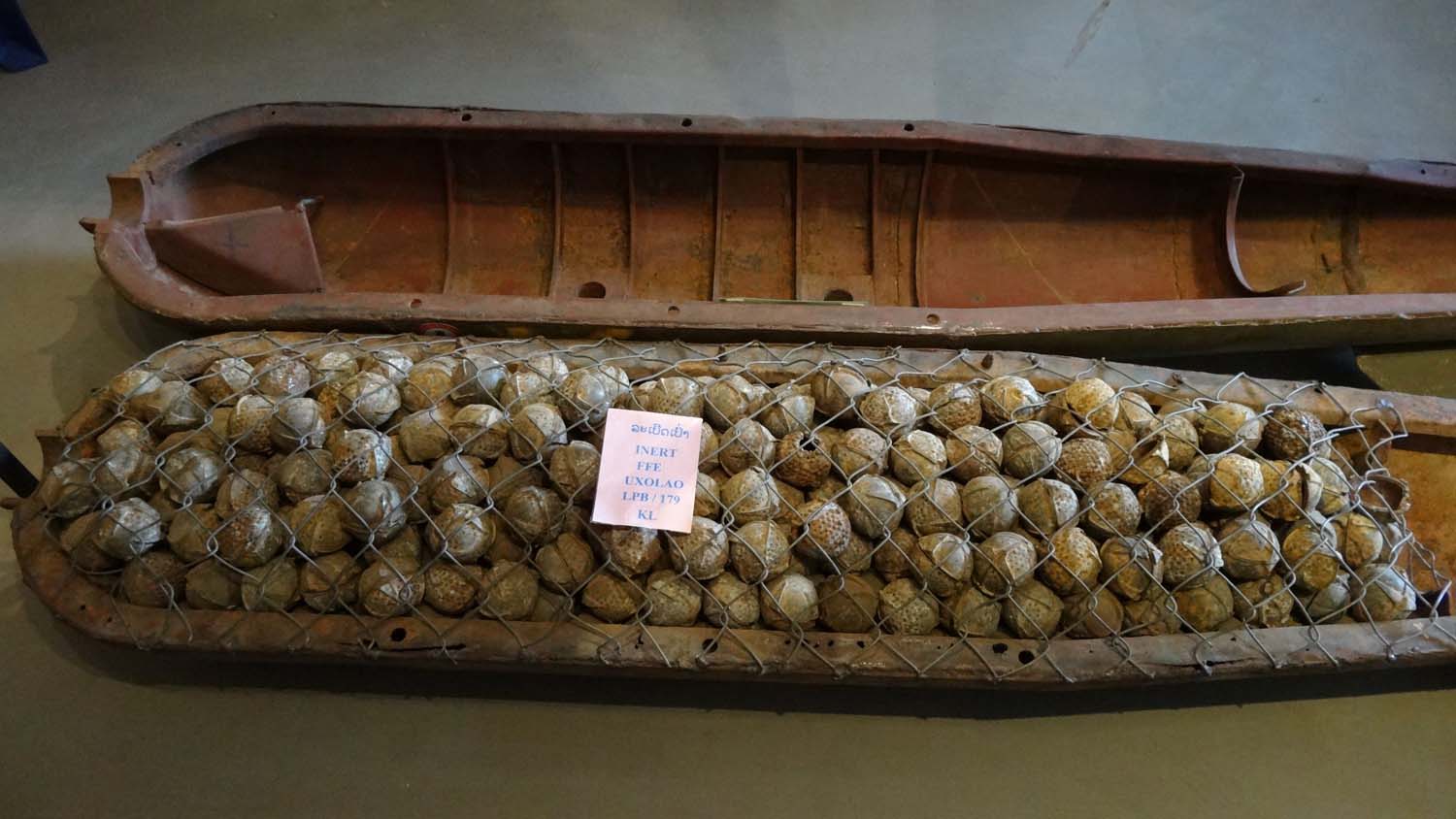 a cluster bomb, see how they would appeal to little kids?!

An estimated 30% didn’t explode leaving roughly 80.000.000 bombies (those little colourful ones that kids love to play with when they find them) unexploded in the countryside. And that’s not even mentioning the big unexploded ones… Nearly 100 countries signed a treaty not to make, buy or use these cluster bombs anymore, but unfortunately the USA didn’t sign and so they are still being produced and used! 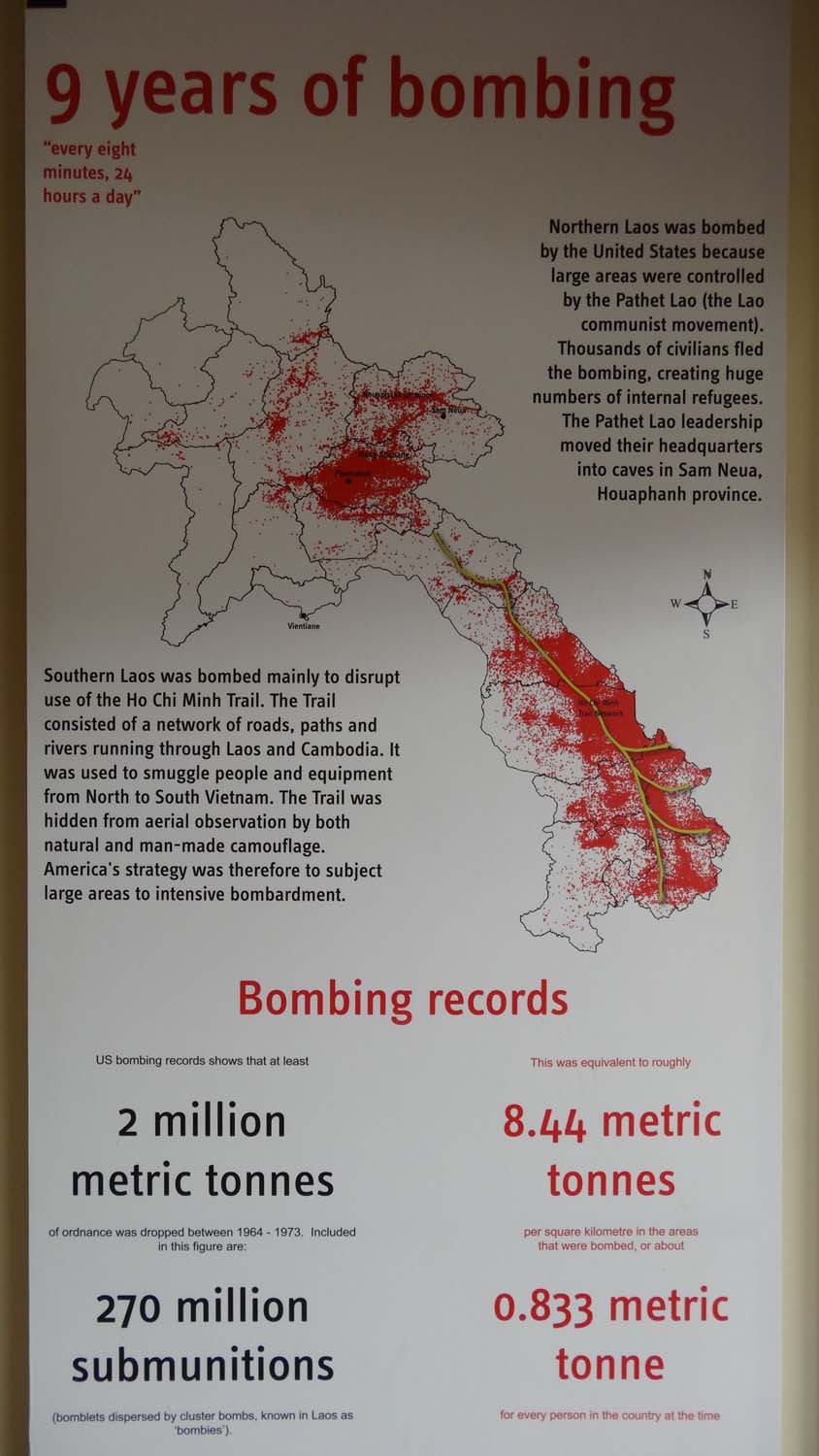 UXO Lao and MAG are two of the organisations clearing up these unexploded bombs to help make Laos a safer place for its people. Just imagine these bombs are under people’s houses, in rice paddies, in school yards, everywhere! It’s also definitely on our minds when we look for a campsite or even a toilet stop. 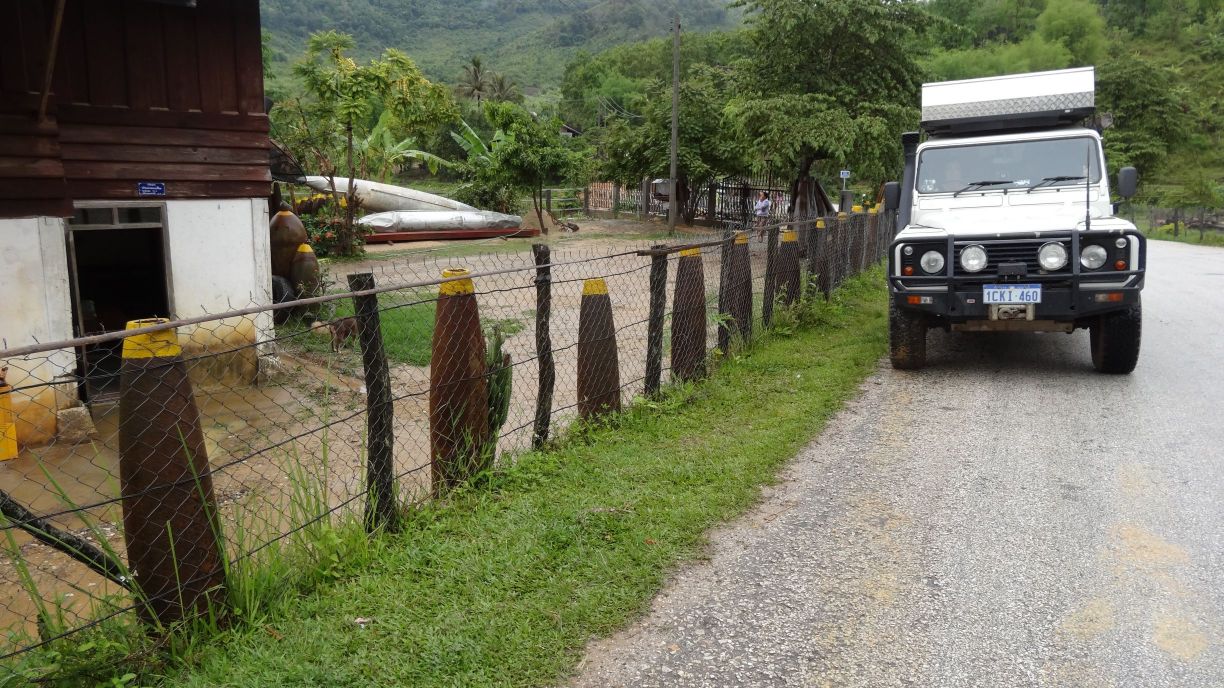 check out the fence posts!

Every day one person is still injured or killed in Laos because of the UXO and this is 40 years after the war ended (in 1973)! We even heard 3 bomb explosions from teams that were clearing bombs found in nearby villages when we were exploring the Plain of Jars. A scary, but for the people of Laos, an almost daily sound.

If you want to watch some excellent movies about it, look up ‘Bombies’, (www.vimeo.com/25923268 or www.itvs.org/bombies/film.html – 56 min) or ‘Bomb Harvest’ (www.bombharvest.com also close to an hour).

During these years of constant bombing (1964-1973) the government of Laos sought refuge in caves in the north west of the country, in a town called Viengxai. We were lucky, some of the bigger caves were closed due to the preparations for the Laos independence celebrations, but we managed to convince them to ask permission for us to go through and were allowed in. 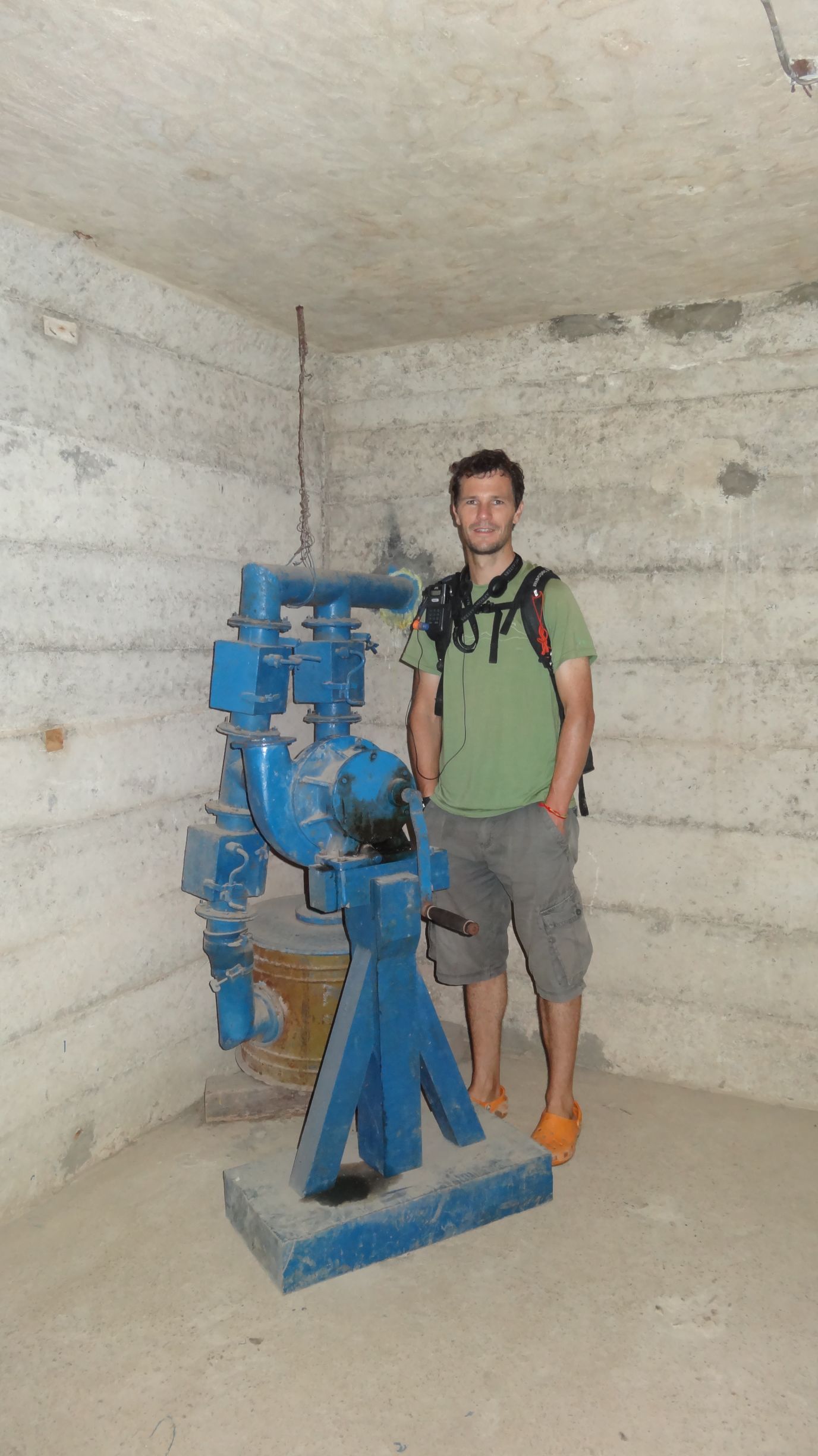 We had an excellent guide called Bounmisaymoua and a very informative audio tour and learned a lot about the 9 years thousands of people lived inside 480 caves in the area. We saw 18, including the president’s cave, the hospital cave, the theatre / cinema cave and the army cave in which 2000 soldiers lived! 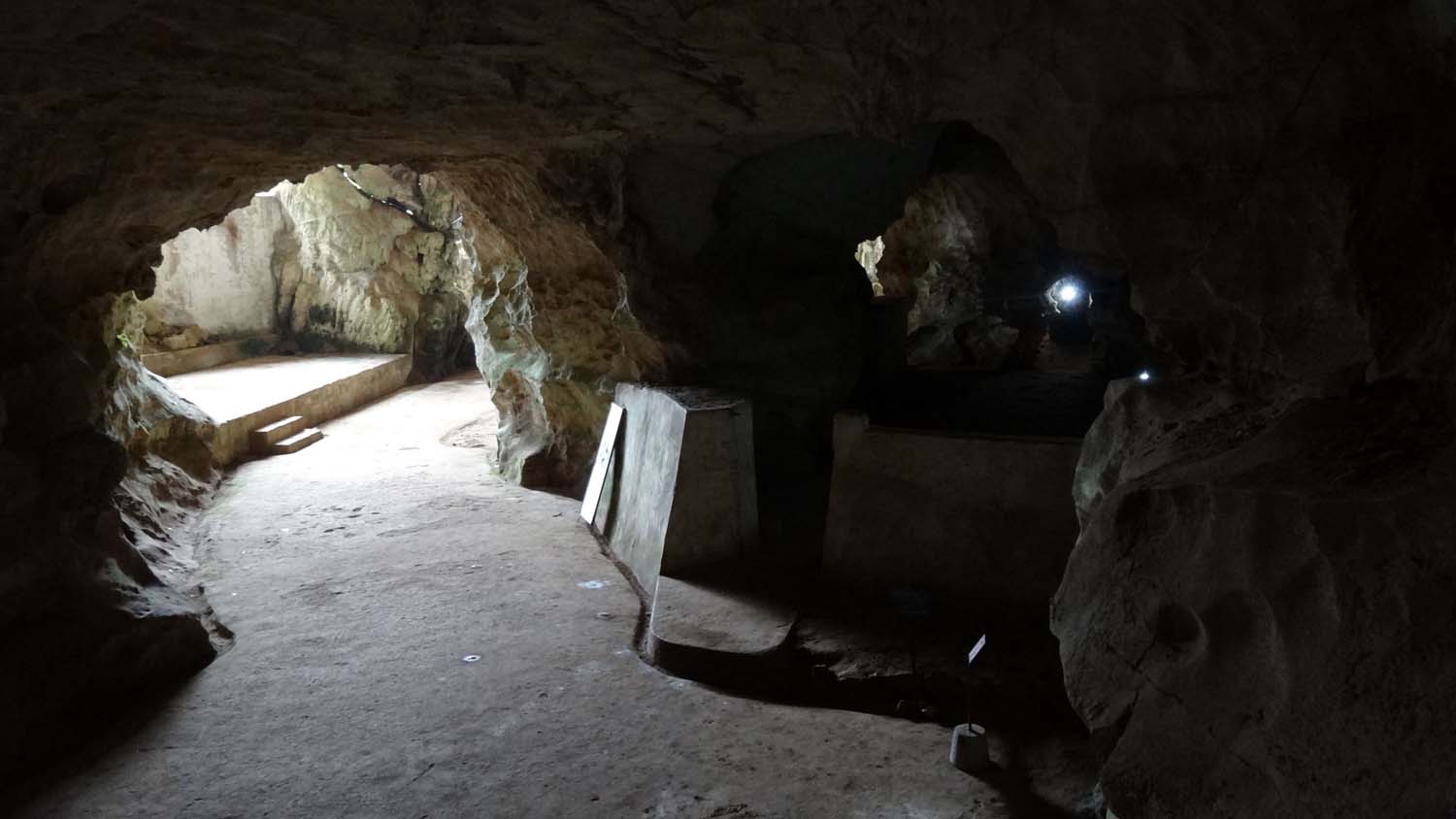 They had to cook before the planes would arrive and work the fields at night. White or brightly coloured animals had to be killed as US planes usually didn’t have specific targets, they were just looking for signs of life and would spot the white chickens, ducks or geese easily.

Kids were sometimes not allowed out of the caves for days and trenches were dug to allow kids to walk to school in safety. Movies were played every Friday evening and were a highlight of the week. They are thinking about screening movies there again soon and people can still get married inside the theatre / cinema cave today. 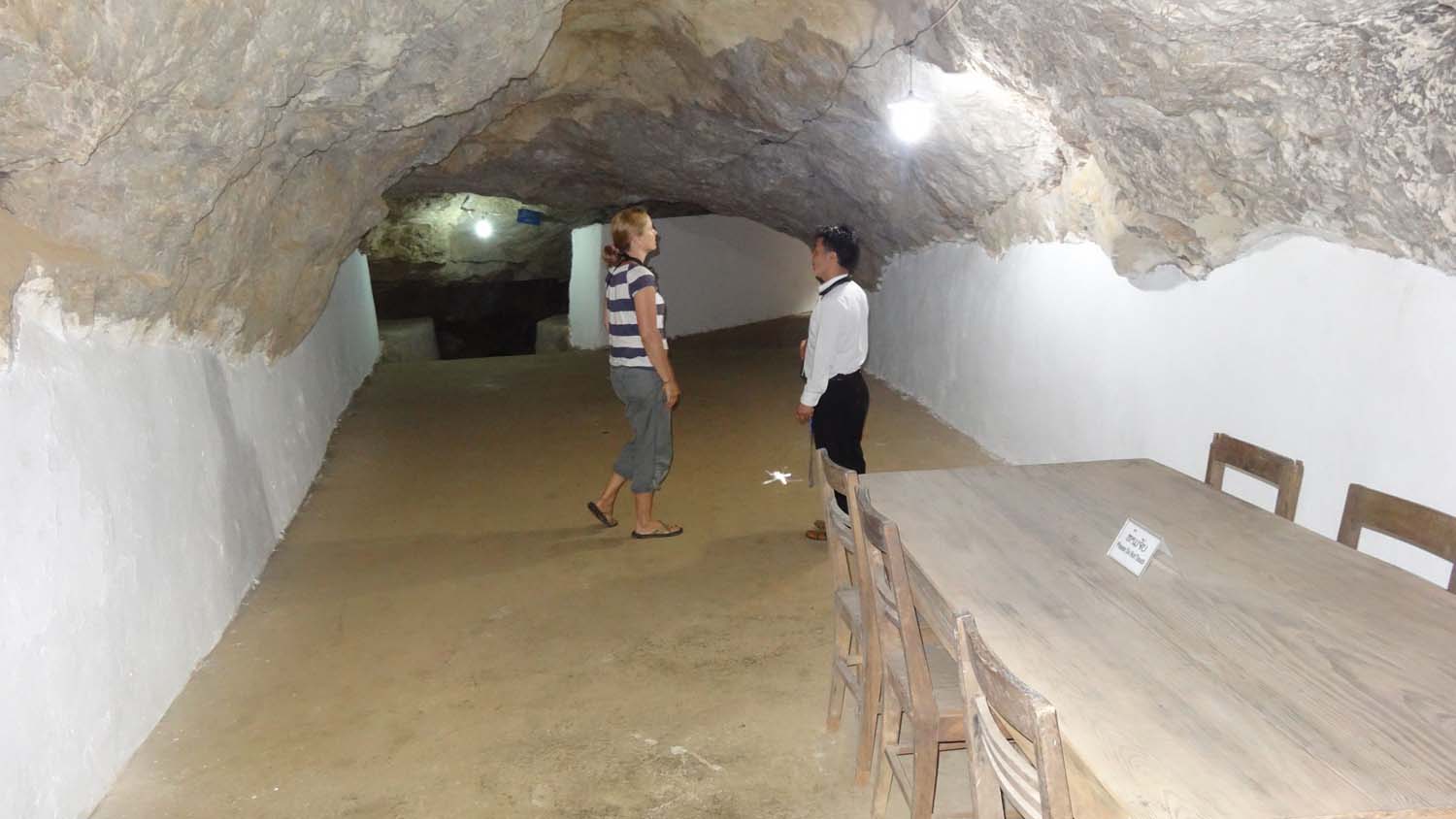 important people’s caves get living rooms and everything

It was a day’s drive to get there and another 2.5 days to get back to the north west of Laos where we will cross into China, but we enjoyed the scenery, the village life, the lunch time swim and were even able to visit a teacher’s house and a primary school in a village where we spent the night. At last we know why we always see so many kids in each village: a family of 8 or 10 children is very normal!!