When you buy a car, the manufacturer needs to make sure it complies with lots of rules and regulations in the country you buy it. This means cars are sent to the wall with dummies inside to make sure they are safe according to local standards. 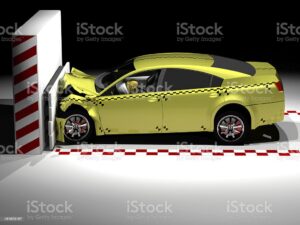 In Australia any changes you make need to be checked by a compliance engineer. And luckily they don’t need to see the results of an actual crash test! He checks all the work and if he is happy that the car is still safe to go on the road, he will issue a compliance plate. This plate is then attached to the car so anybody who ever wants to see if the changes you made are legal can just look for the plate. As this plate is blue, people who need to do this usually refer to this tick-in-the-box exercise as ‘getting your blue plate’.

We needed our blue plate to be legal on the road.

So, one of the first things we needed to do when we started the process of removing seats and doors from our Defender 130, was find an engineer who could certify her once she was done. When we were at the 4wd show we chatted to some of the guys at one of the stands where they do a lot of modifications to vehicles and from them we got a name. This person unfortunately couldn’t help us, but eventually we found one through our network.

Over the next months we would occasionally give him a call or send him an email to keep him informed of our progress and sometimes we had a question for him. He would give us advice on what we needed to do to make sure we complied when she was finished. He told us for example what type of glass to use in the new windows we were adding in the cab.

Because we were converting her into a (permanent) campervan (not a slide-on), we had to show him she had a fixed bed, a table and chairs, as well as a kitchen. Then there were additional things we had to comply with like having a fire extinguisher and reflectors on the back. And of course after removing the roof and the rear seats and wall, we had to show him that it was all put back together again properly.

So, one day in July we were finally able to ring him and get an appointment booked. Up until then he had never seen Lara, just some pictures occasionally.

We drove to his brother-in-law’s workshop and spent the first half hour chatting about Defenders as he also owns a 130. We then drove her over the pits so he could have a look. He noticed the long-range fuel tank and asked if the car already had a blue plate for it. Not that we were aware of, we didn’t even know that needed a compliance plate! And everyone we spoke to afterwards had no idea either. Our tank was added when the car was new in the garage, but they had never bothered adding the blue plate. 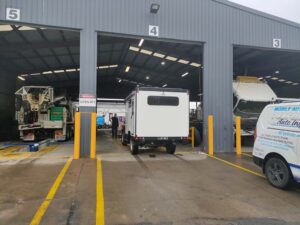 Lara is driven over the pits 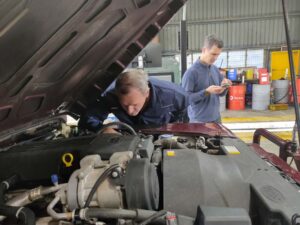 Our engineer checks the engine bay 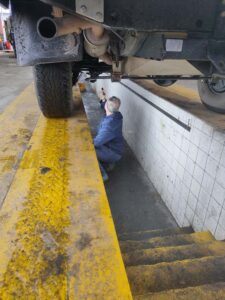 He also has a look underneath 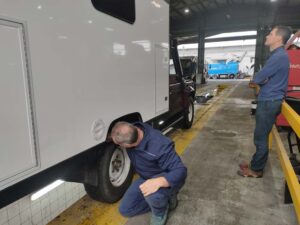 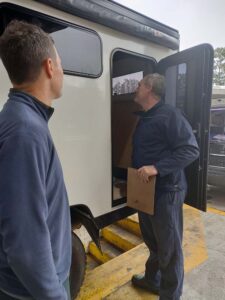 He only has a very quick peek inside

He asked a few questions, but mostly seemed happy with everything, and not much later he was ready to engrave the blue plate with the details of the car as well as the codes for all the modifications he would certify (including the long-range fuel tank). 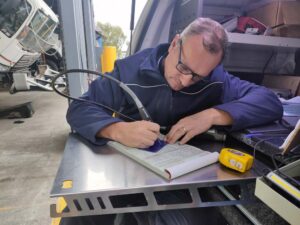 He had his mobile engraving unit in the back of his van, and not much later we had our blue plate in the car! Unfortunately he punched a hole in the external wall of the car, but we solved that with a pop rivet. Luckily Defenders have many so it wouldn’t stand out too much (although at the moment it does as we still need to find the matching colour paint). 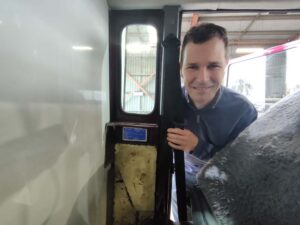 and so, moments later, we have our blue plate installed

We were legal again and could now drive her anywhere we wanted!

It was an important tick in the box for us, we are another step closer to starting our adventures with Lara!