We spent a total of 3 days in Beijing, and as Jon had worked here before, although it had been 15 years, he became my tour guide. 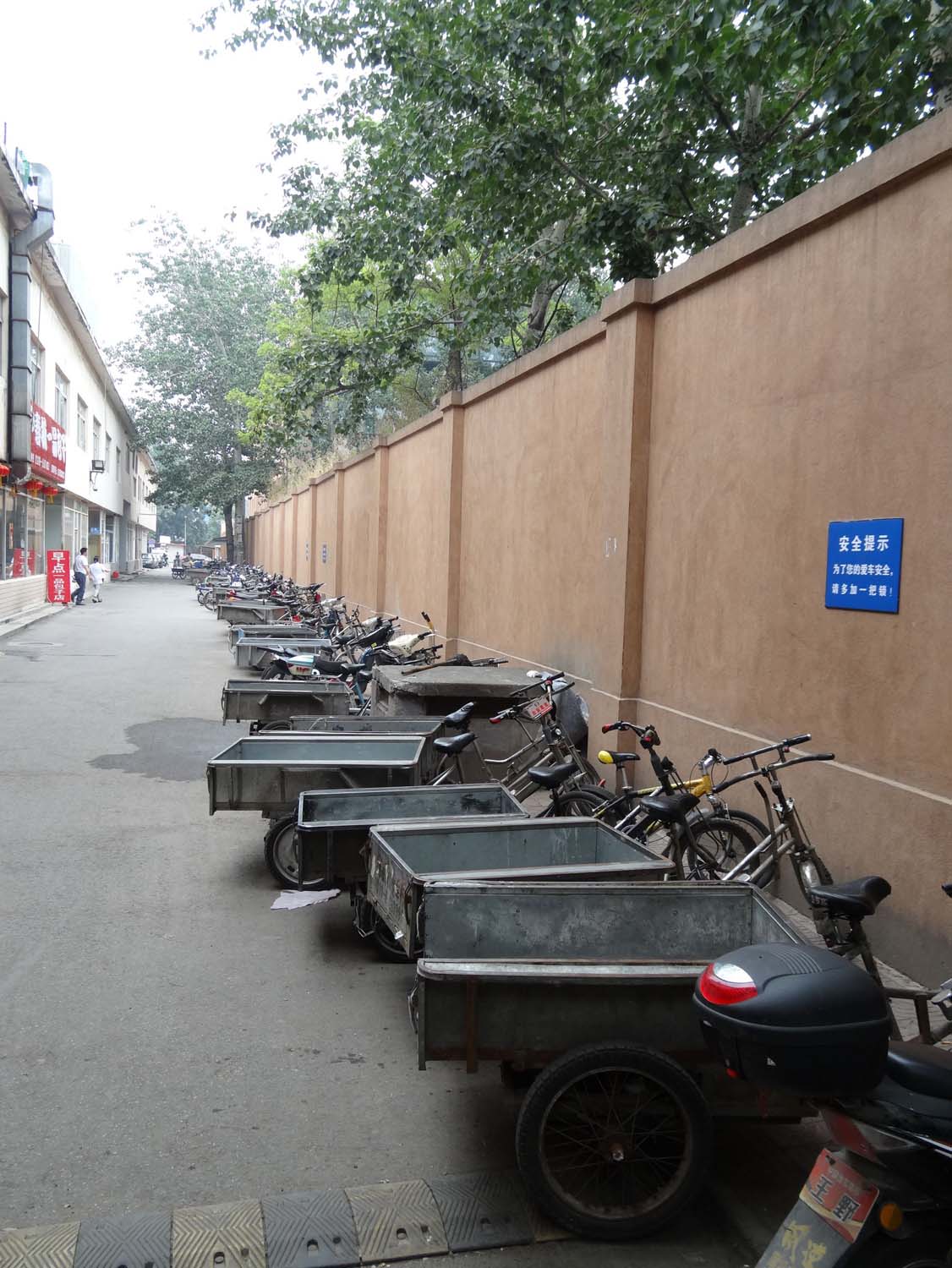 these bikes now all have electric engines 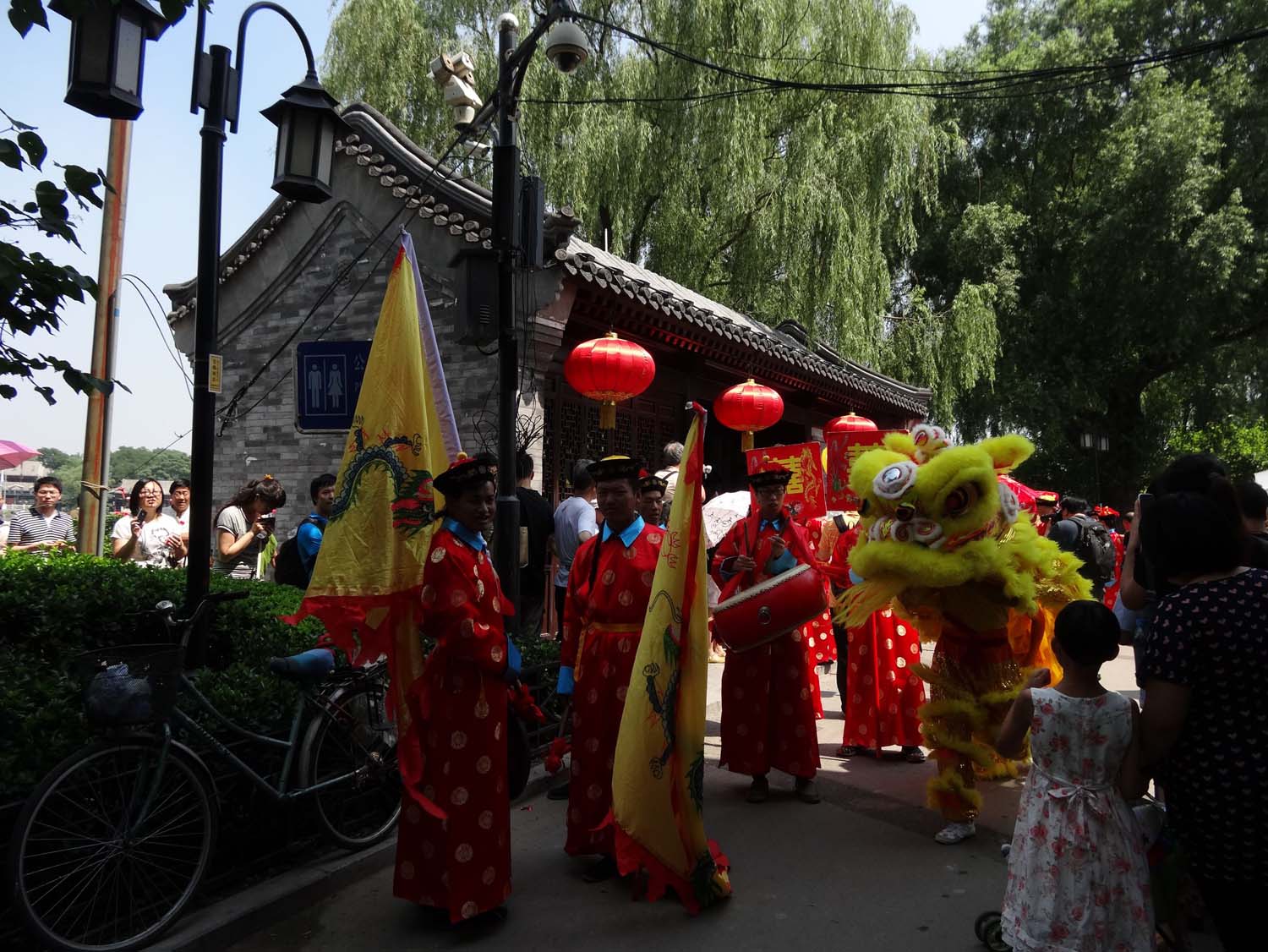 Our first stop in Beijing was the Summer Palace, we had driven to the Ming tombs in the morning so we arrived there just after lunch. The Summer Palace was where the emperor would escape the summer heat of the city where he normally lived (in the Forbidden City). It was interesting to see there was no need to pay for parking and entry was only 60 yuan ($10) to see everything or 30 just to walk into the gardens. Very cheap compared to the rest of China!

Inside the gardens is a hill, one of only 3 hills in Beijing which otherwise is as flat as Holland. On the north side of this hill are the temples and built on the southern side from the lake up is the palace. Unfortunately they don’t open much of the palace to the public, we didn’t see any of the living areas, just the official, ceremonial areas of the palace.

But we did see the opera building where the emperor and his important guests would watch the Peking Opera performed. And we watched some of it too as they were doing short performances of opera, dance and music whilst we were there! 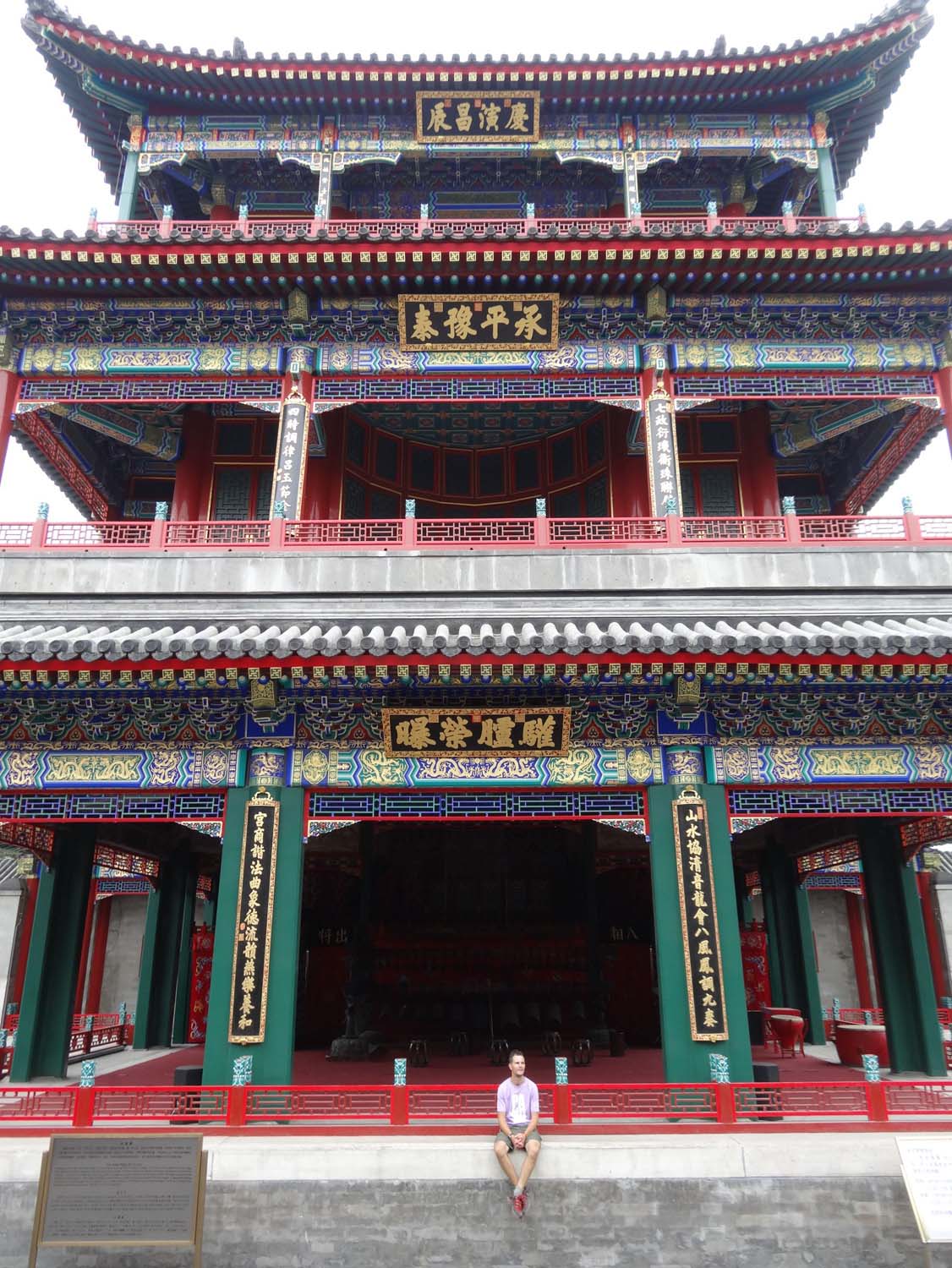 Opera Building at the Summer Palace 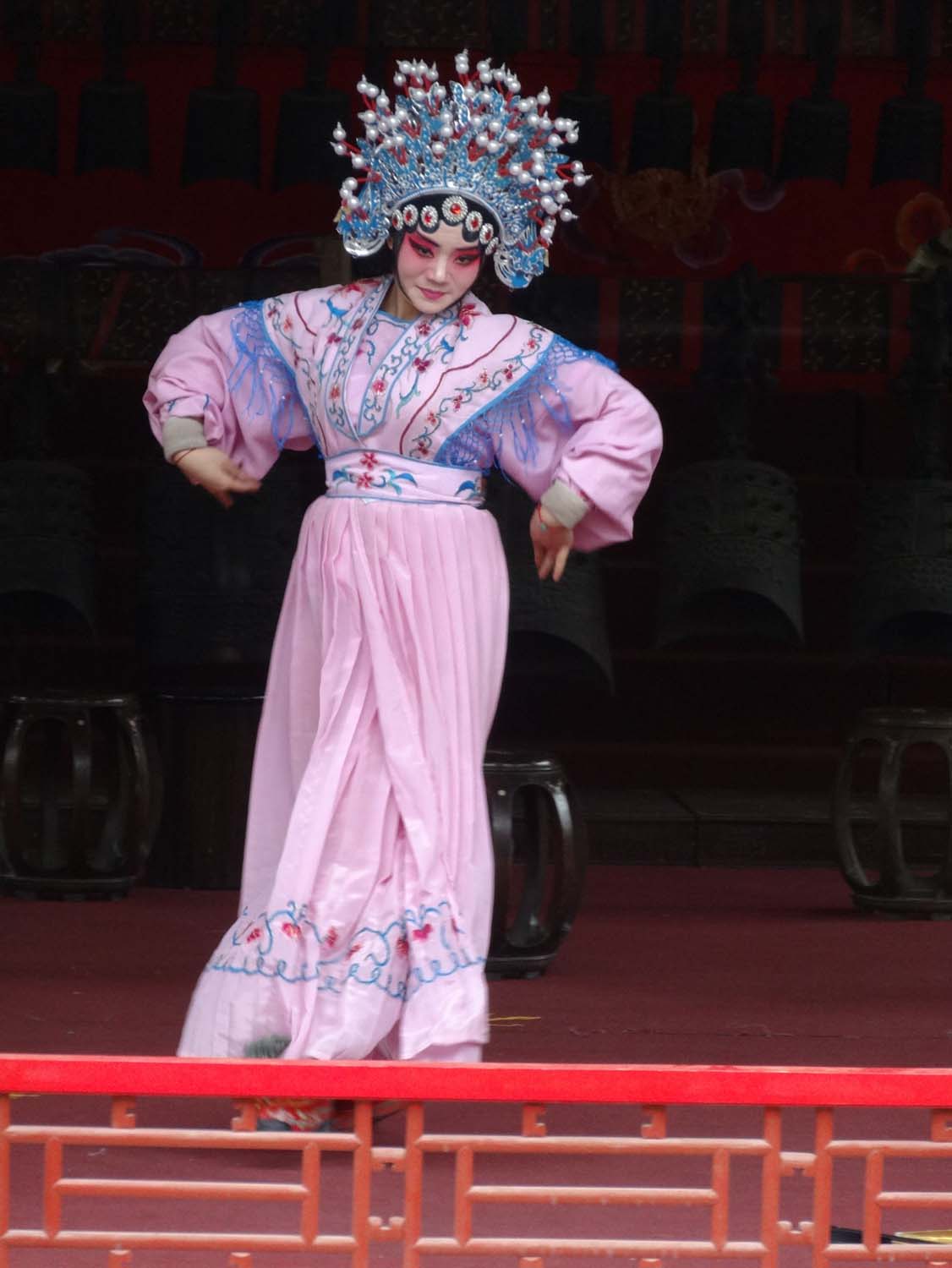 opera singer in the Opera at the Summer Palace

We also decided it was time to finally join the millions of Chinese in their dress-up party and become emperor and empress for a few minutes (and a few yuan). Jon donned the yellow robe and pointy hat of a Ming dynasty emperor and I picked a red robe with flowery hat of a Ming empress. Don’t we look royal! 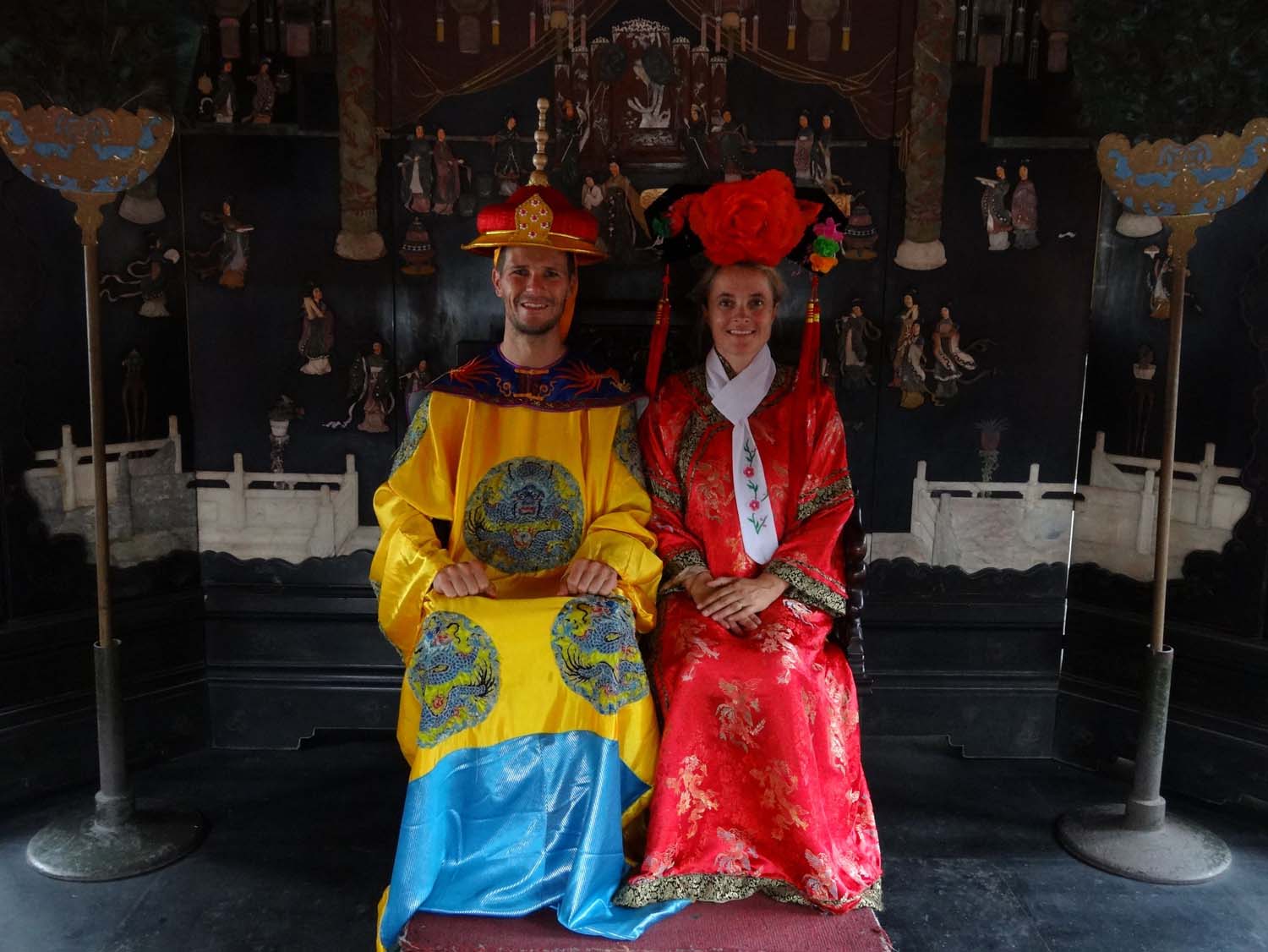 The summer palace has a huge lake in front of it, all part of the gardens. We walked around the entire lake, and visited the island before heading off to find some dinner.

Driving around we accidentally found Metro, a huge wholesale supermarket where we had shopped before and we knew they sell cheese, bread and a range of western goodies. Dinner would have to wait as we stocked up on food for the Gobi Desert.

The next day we found a parking spot for Lara close to the Forbidden City, took the bikes off the back and started our cycling tour of Beijing. We rode through hutongs (small alleyways with little courtyard houses and shops, public toilets every 200m or so as they don’t have toilets in their houses), past the Drum and Bell Tower, around the Forbidden City, past a wedding and a lovely tea shop. We wanted to stop for a cuppa there, but weren’t prepared to pay $145 for a pot of tea… 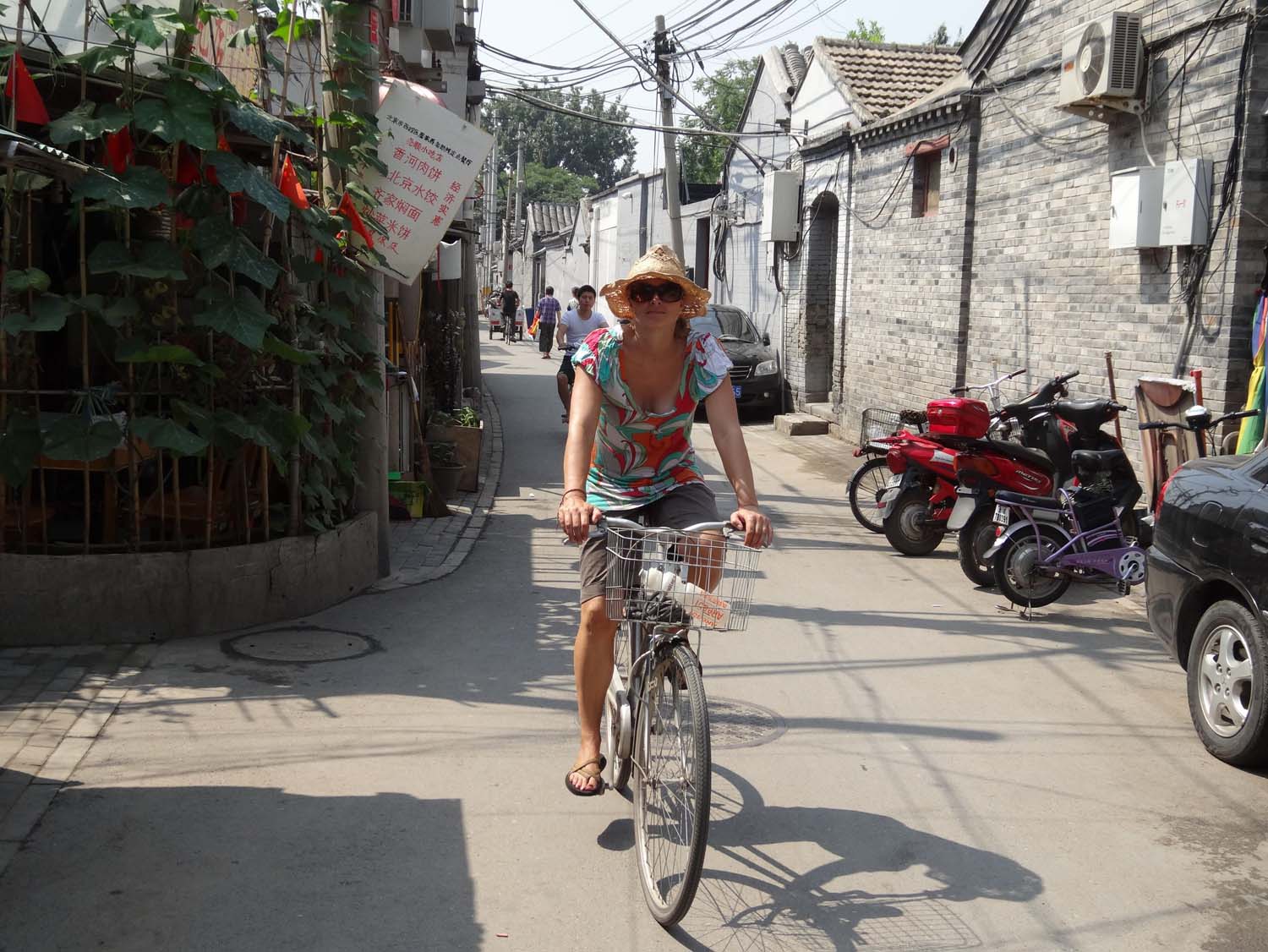 we love having our bikes with us, exploring Beijing with them was great. 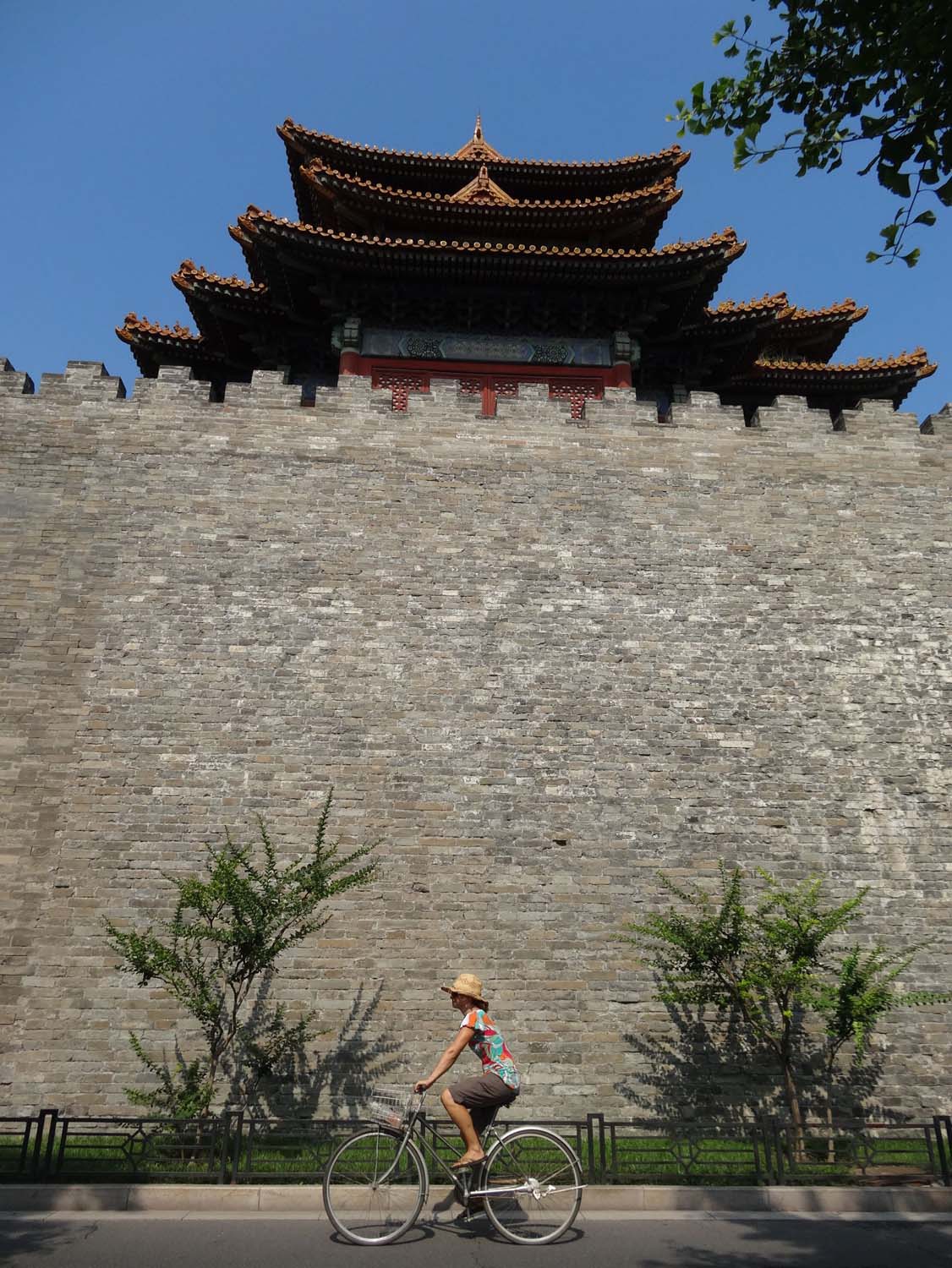 the Forbidden City seen from the outside 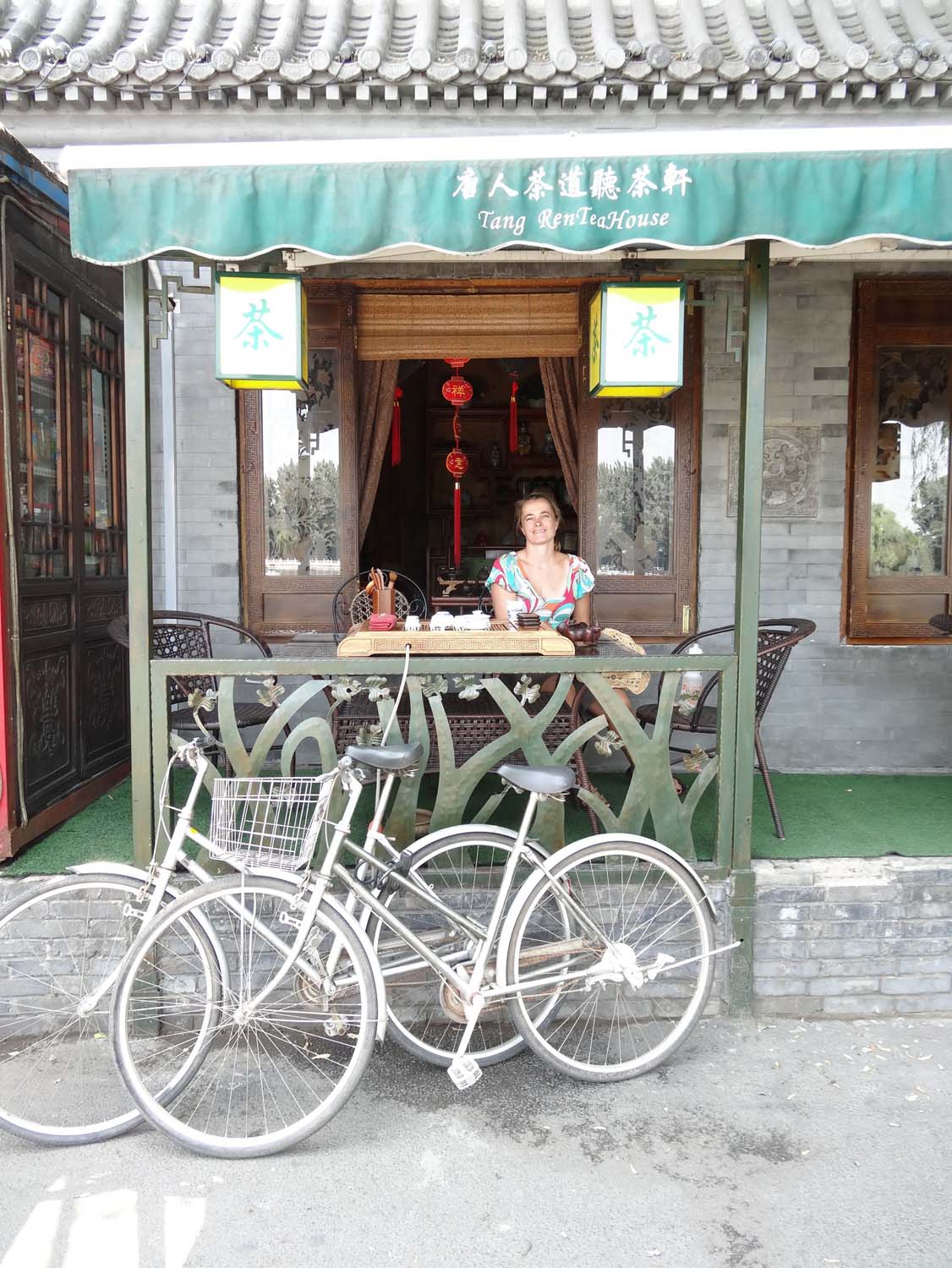 lovely tea shop, shame it was too expensive to have a cuppa

Of course we also went inside the Forbidden City and stood on Tiananmen Square, the heart of the student uprising in 1989 when the Red Guards opened fire and killed many. The square is still teaming with guards and there is even a security check to get on, bikes are not allowed and neither is stopping a car… (we found out when we took pictures of Lara in front of the Forbidden City entrance and they pulled us over and wanted to see our driver licence). 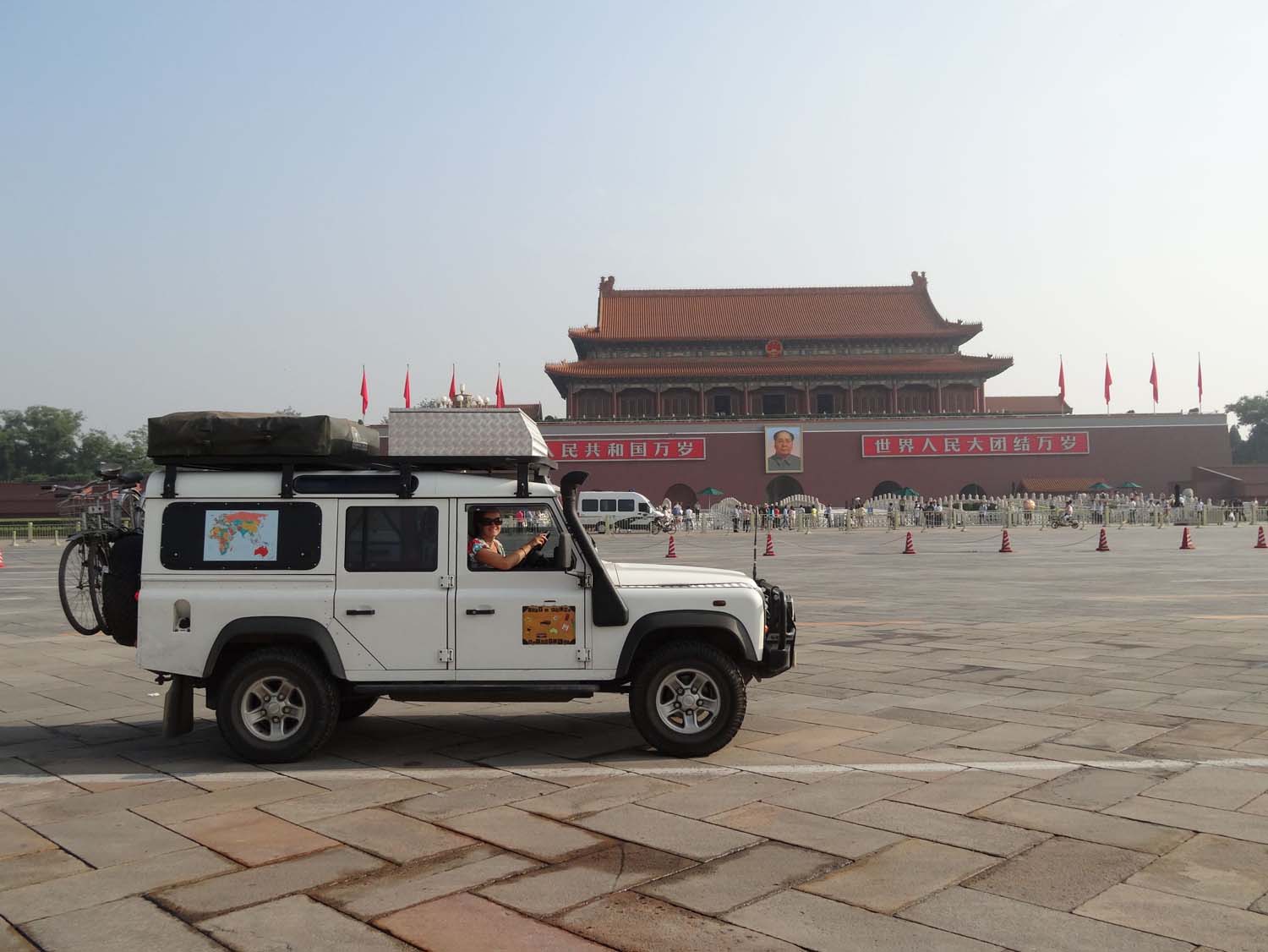 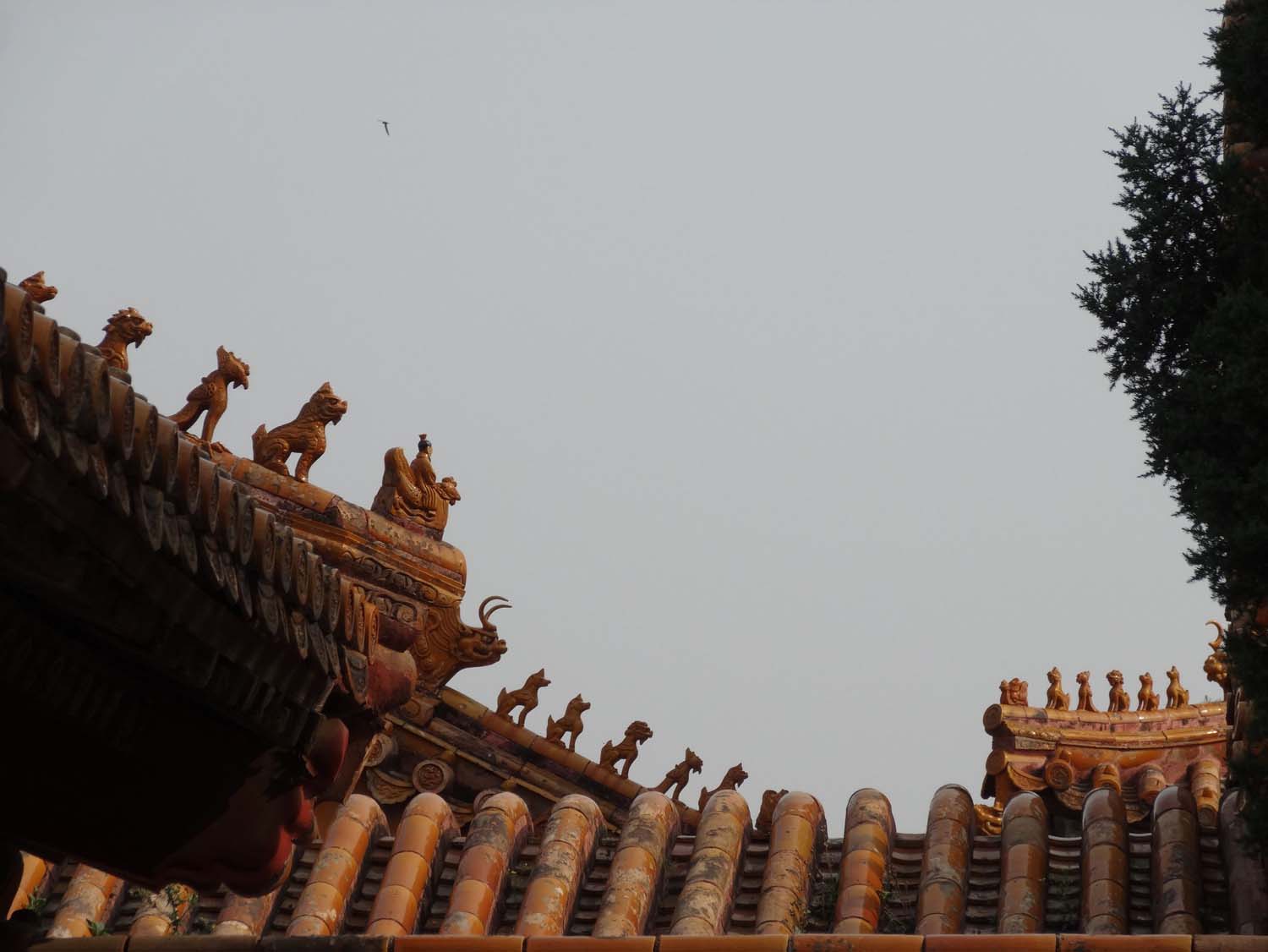 we love the roof decorations in the Forbidden City 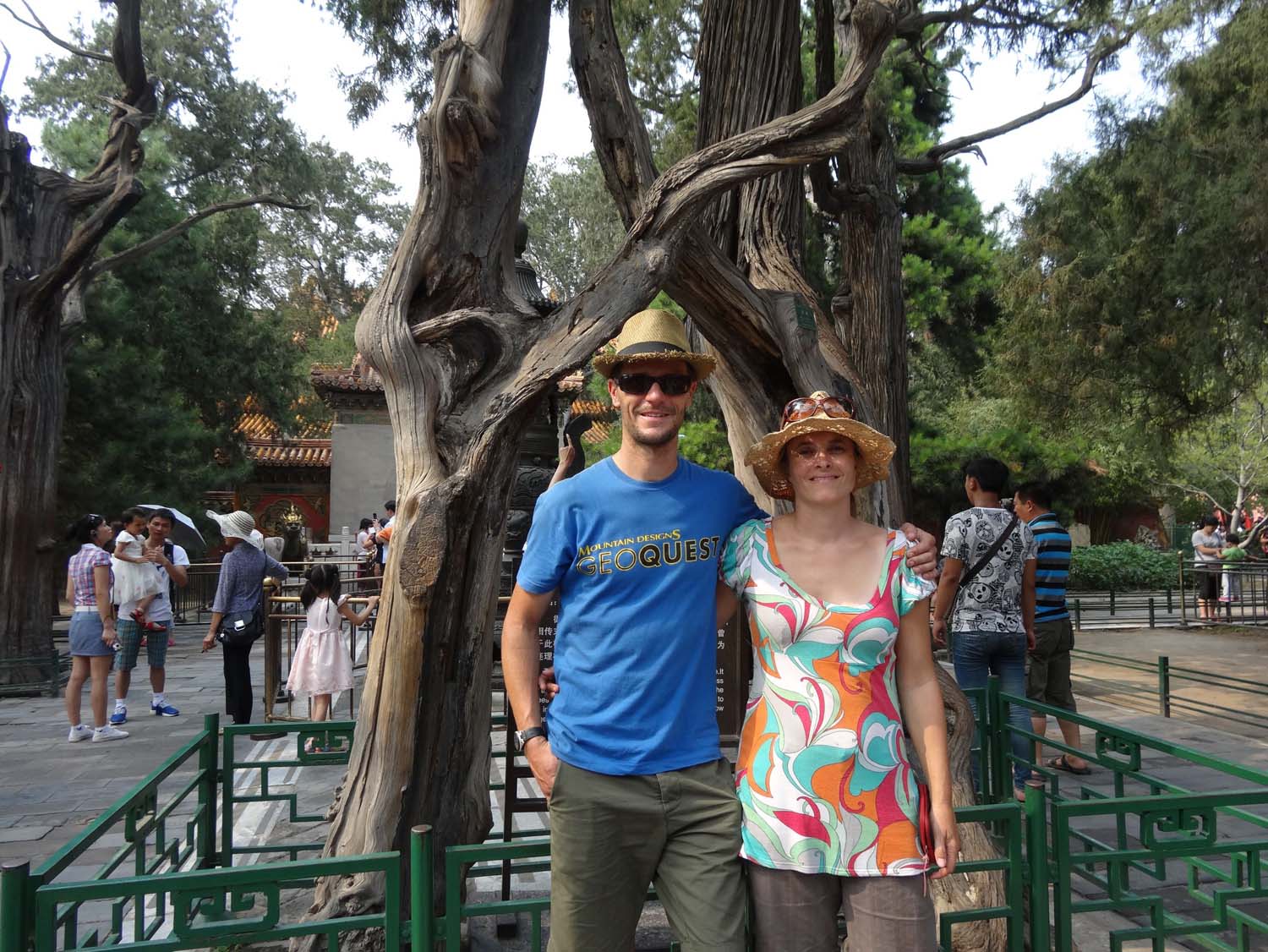 entwined trees, symbol of everlasting love in the Forbidden City

That night Jon was in heaven when we went for some Peking Duck in Peking with Guy and Cheryl. It’s a massive duck, roasted and the carved bits of meat are eaten with some shallots and sauce inside a mini pancake. I’ve been told it was delicious. The restaurant (Quanjude) was enormous, and after waiting a few minutes for our table we were told it was on the second floor in room 206…! 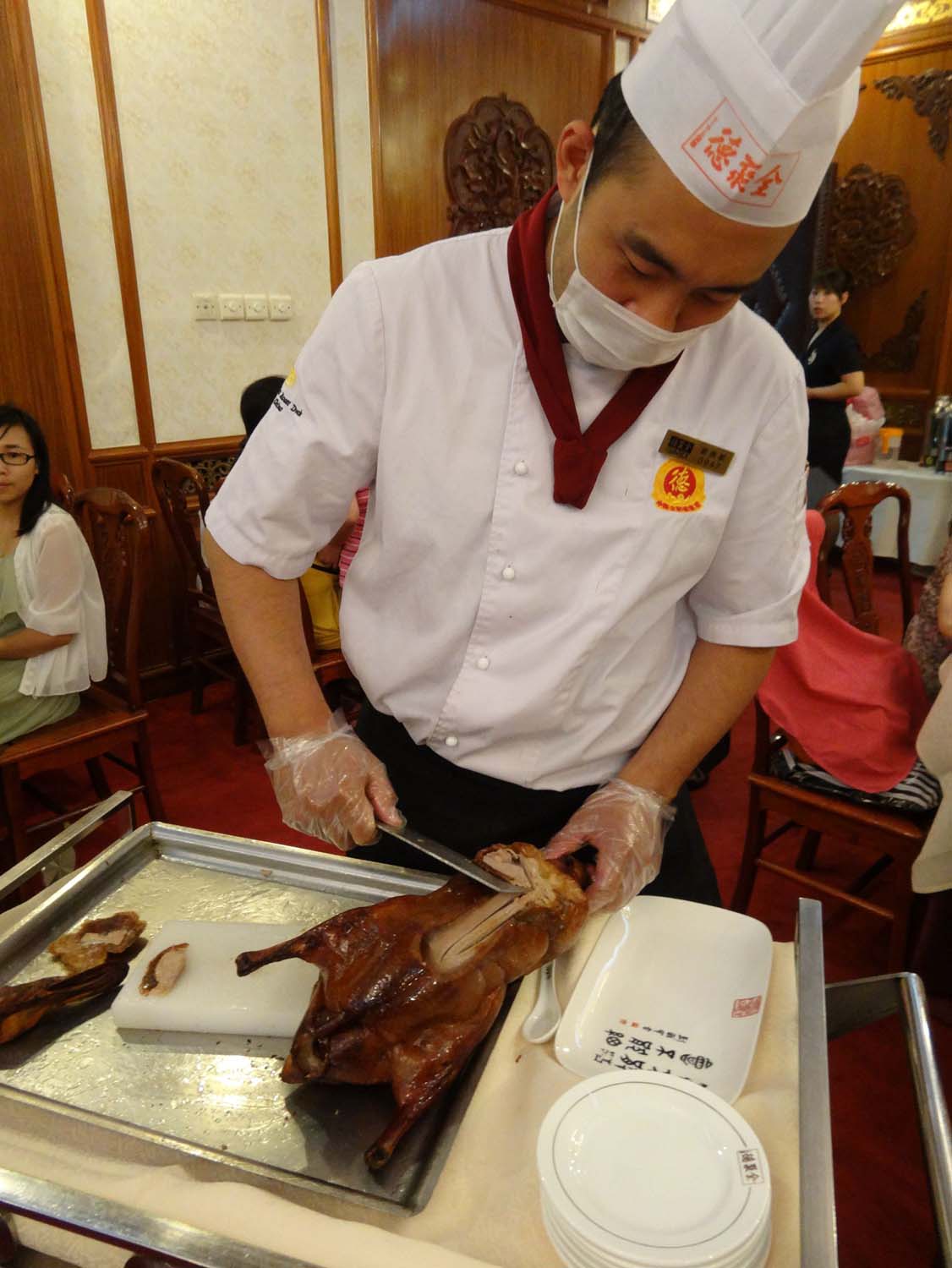 Peking Duck being carved up for us

On our last day in town we hopped onto the metro from the Peking University where we had done our laundry and printed some papers. Our new registration papers hadn’t come through yet so we decided we needed an updated version of the old one as we’re about to cross into Mongolia and you need to show your rego papers at most border crossings. 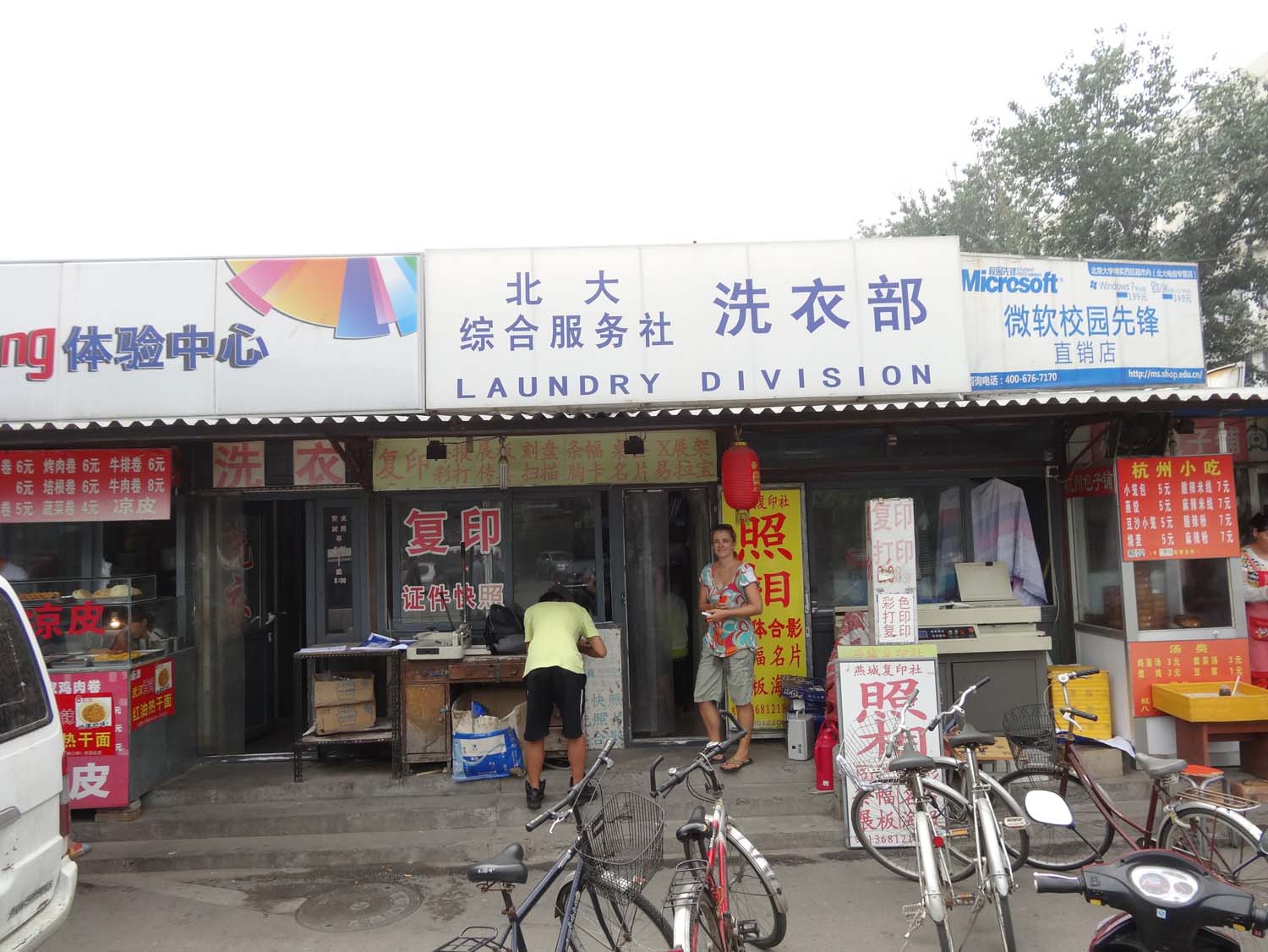 doing our laundry and printing some papers at the Peking University 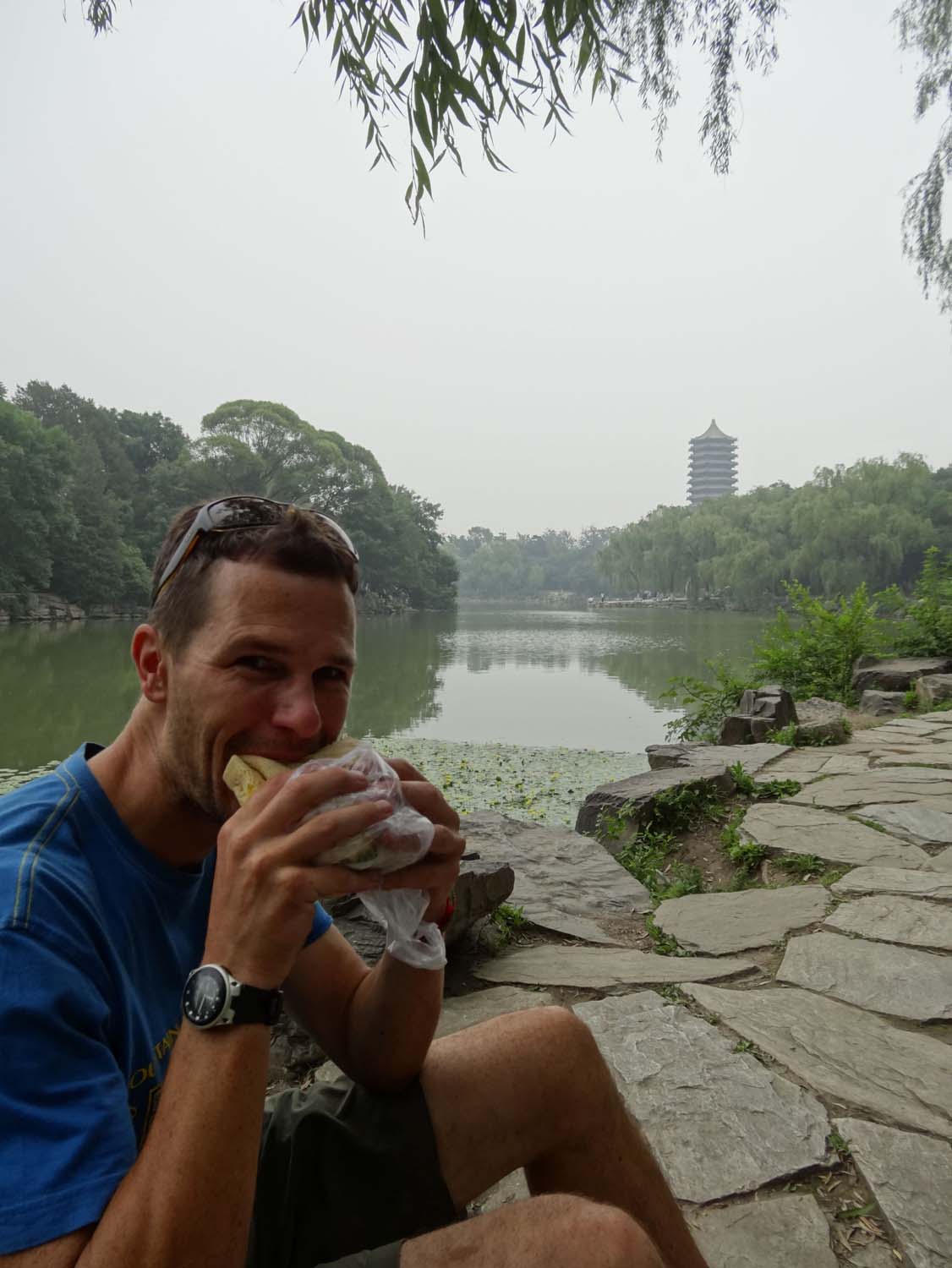 Our mission was to find the underground city, built in the 60’s and 70’s as a shelter for the people of Peking. We found the old entrance of the museum, but unfortunately it had been closed for nearly 6 years now :-(. The tunnels are still there, including the hospitals, cinemas and everything else a city needs, they are still being maintained, but you can’t visit any longer. We then walked through the hutongs to the Temple of Heaven before dinner at the street stalls in the city.

We had no problem finding good campsites in and around Beijing. One night we stayed next to the front gate of the Summer Palace and we also camped at the Bird’s Nest, Beijing’s Olympic Stadium from 2008.

our campsite, right next to the entrance gate of the Summer Palace