It’s always great to be invited for a wedding. It’s usually a good party, and you can catch up with great friends before, during, and after the festivities. When we were in Australia for Scooby and Michelle’s wedding last year, Clayton already mentioned his upcoming wedding, so we knew we would be back in 2018 for it.

We’re running out of friends who could potentially invite us to their wedding (but we’re counting on Marty and Kate for the next one!), so we might have to come up with another plan for future years, but this one was sorted. Clayton & Chiara left it to late in the year, so early December we found ourselves back in Perth. But we weren’t staying long. After one evening with Regine, and our now annual picnic at Matilda Bay where we manage to see most of our Perth-based friends, we fly straight out to Brisbane. 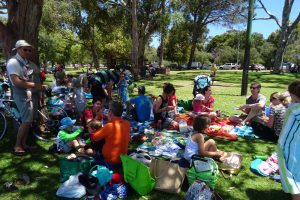 our almost annual picnic at Matilda Bay, thanks everyone for making the effort to come again! 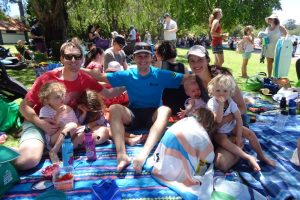 Jon with Pete and Jo, and just a few more kids than in the good ol’ days! 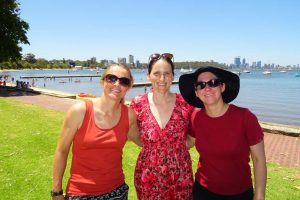 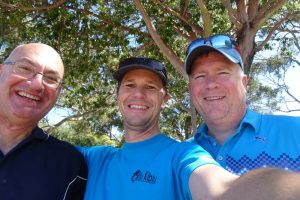 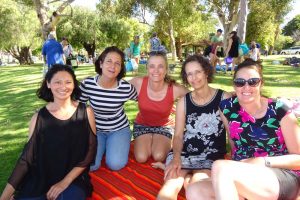 Jon has meetings in the Brissy office, and has also managed to make a few other appointments. Monday night we caught up with the crew from the trip. Guy, without realising, managed to book a nice restaurant about 5 minutes away from Daniel’s apartment, very conventient. 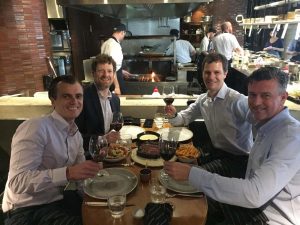 the old team gets together again for a relaxed lunch – Piotr, Daniel, Jon and Adam 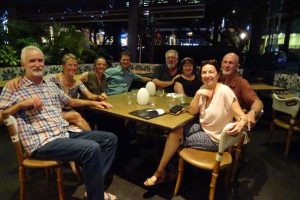 Guy, Cheryl, Jude, Jon, Rob, Robyn, Miles and Marina get together again for a lovely meal in Brisbane

We were a little late arriving, but finally managed to join a Tuesday night on Mt Coot-tha. It was the annual white elephant xmas celebrations that night, so a large crowd came for the walk and potluck dinner afterwards. It was so good to be back! 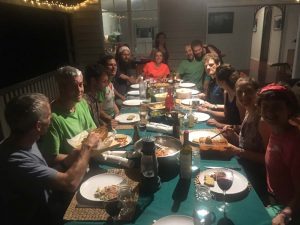 we manage to coincode our visit to Brisbane with a Mt Coot-tha run AND the annual white-elephant xmas celebrations – win!

Wednesday we drove over to Marjolein and Mel to join them for dinner, but also to check out the new shed and deck. They’re massive, and it looks great. Jon catches the bus to work whilst Jude and Marjolein take the dogs for a walk before sharing lunch. And then it’s time for dinner again. Again we can walk from Daniel’s apartment, But this time it was booked nearby for a reason, Alix and Adrian would join us. They flew in that evening and had also booked a hotel not far from us. It was great to catch up with them, and Jan and Jeanette again. We spent the next morning talking and eating with Alix and Adrian again, before we hopped into the car and drove up the coast to Buderim. 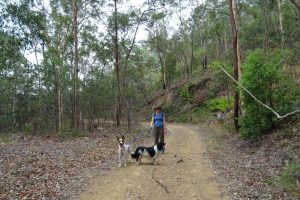 Jude and Marjolein take the doggies for a walk 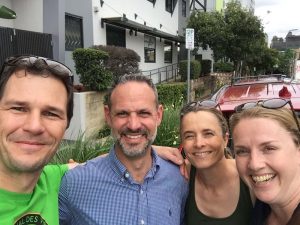 these two come all the way to Brissy to catch up!

Both Jonno & Angie and Todd & Jenn were now living up there in their stunning houses. Chantel was coming up too, and she also brought Jo with her who had flown in from Warragul, Victoria for the weekend. It was so good to be able to give real hugs again, to hear everybody’s stories, and to see the houses. The next morning we drove to Conondale NP where we had booked a campsite. 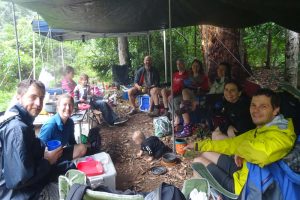 it’s a rainy weekend which is lucky as we get to use additional campsites for our dining tent – Tom, Jenn, Anna with Millie and Lissie, Todd, Jonno, Jo, Angie, Chan and Jon

Tom & Anna were also joining us there with Millie and Lissie, their two girls, so together with Charlie, Todd & Jenn’s new addition, we had 3 kids around. It made for a slightly different camping weekend. Gone are the days of hardcore, long hikes. Instead we went on short strolls, talking and laughing a lot, and the girls and Jon stripped off for a dip in the cold waters of the waterfalls. The rain didn’t dampen our group spirit, and even little Charlie slept through most of the night. Too soon we had to say goodbyes again. We spent another night with Jonno & Angie, had lunch with Todd & Jenn the next day, before driving straight to the airport. 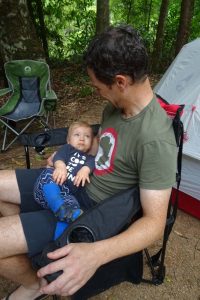 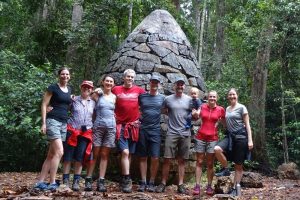 the team goes for a walk in Conondale NP – Chantel, Jo, Angie, Jonno, Jon, Todd, Charlie, Jude and Jenn (also Jo has flown up to be here this weekend!) 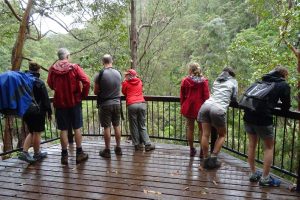 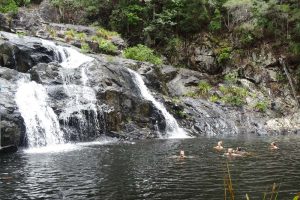 Jon follows the girls in for a quick swim – Jenn, Jude, Angie and Chan 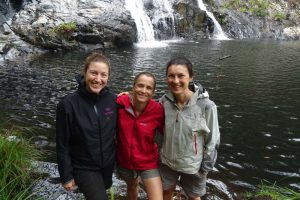 last time we had the three boys in their Icebreaker t-shirts, this time the girls are showing off their Arc’teryx rain jackets…

Back in Perth we catch up with Marcus, Bec, Marty, Kate, Regine, and Kat for dinner near the beach. Jude goes hiking with Kat in Yanchep NP and Kings Park, getting a full dose of all the Australian animals again. Jon heads into the Perth office for some more meetings, and we finally manage to go back to Somerville. The outdoor movie season has just started and we arrange the usual picnic before heading to the movie. Joel, Marty, Kate, Louise, Greg, Kat, and Regine join the food, but Louise, Marty and Kate can’t stay for the movie. We have a nightcap at Marty and Kate’s place afterwards instead. 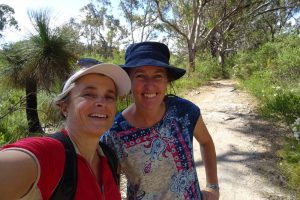 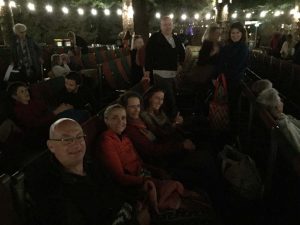 even the outdoor movies at Somerville have started already this time – with Greg, Jude, Regine, Kat and Joel

Thursday is night markets at Scarborough Beach. It was Regine’s idea to head over for some food and drinks, and meet up with all those living in this area. Scooby came out briefly as Michelle and their baby boy Logan were struggling after a restless night. Mark joined for dinner, as well as Laura and Linden, and even Greg came all the way up, even though he doesn’t quite live in the area. And of course Regine was there too. We all picked our individual dinners from the stalls before sitting down on the benches. It was a great night, especially after we scored some seats with blankets right on the beach, and because it was such a small group we felt we had a good catch up with everybody.

And then it was time to head south for the wedding. It had been years since we were down in the Margaret River area. And driving down brings back many happy memories. First stop is lunch with the wedding crowd. Jude heads off to a winery for a posh lunch, after dropping off Jon in the brewery where he demolished a hamburger. The boys were looking after the kids this time, so it was grown-ups only for the ladies. Very relaxed. 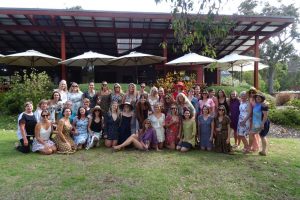 all the ladies after the lunch the day before the wedding

We are meeting up with Nick and Annamaria who just happen to be living in Dunsborough for a few months, as well as with Jo and Si who are visiting them. They’ve got five kids in between them now, so it’s a bit of mayhem at times, but we join them for a bbq and breakfast the next morning. Followed by a bit of wine tasting, as it would be rude not to. It’s awesome to catch up and spend some time together. 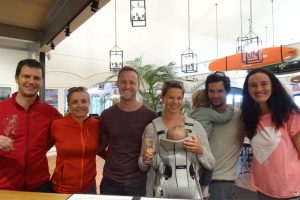 Nick and Annamaria are in Oz too, we catch up with them and Si and Jo who are also visiting them

And then it’s time to get changed and head over to the wedding venue – a cow’s paddock. It may sound strange, but it was a fabulous set up. A marquee full of long tables, with a bar and dance floor in front of it. Simple, but stunning. Decorated and set up overlooking Geograph Bay, an amazing view. The ceremony was held a little closer to the ocean and nearly brought Clayton to tears. So sweet. 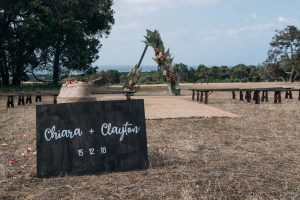 how is this for a wedding location? such a beautiful location, love it! 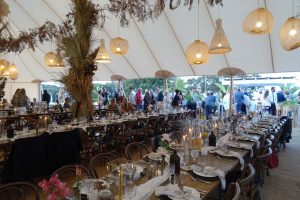 the dinner location was in the same field, it looked amazing (and the food was delicious)

And then it was time to drink, dance, eat, party, and talk. Talk to lots of our friends we hadn’t seen in a long time. We even managed to chat to the bride and groom a few times, despite the fact they had a lot of friends and family there. Luckily they also played some of Clayton’s ‘doof-doof’ music, so we spent quite a bit of time on the dance floor. But even in a paddock you have to go home on time, it felt like we could have partied on for a few more hours. 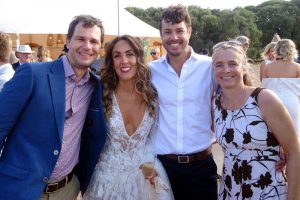 Jon, the stunning bride, the crazy groom and Jude

The next morning we were supposed to gather on the beach for a swim and a bbq breakfast, but the weather was quite threatening, so they moved it to the house the new husband and wife team were based. We arrived early, caught up with everybody once again, before starting the drive back to Perth as we were flying back to Dar that night.

But not until we had caught up with Helmuth and Eugenie, and her parents, who had even thought of cooking us a delicious dinner. They had been away the whole week so we were very happy we could see them at least for a few hours before heading off again. 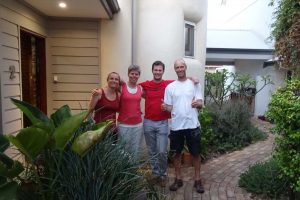 We made it to the airport on time, and, after an uneventful flight, made it back to Dar in the afternoon. Enough time to unpack and do the laundry as we are off again in a few days, this time to Ethiopia (we wrote three blogs about that trip, check out our stories about the north of Ethiopia, the tribes in the south, and our quest to find the Ethiopian wolf).