Another marathon in another country

Friends had told us about the Victoria Falls marathon and their tales about elephants chasing them (the wrong way!), made it strangely sound appealing to us. Luckily we have crazy friends who also find this appealing, and together we came up with the plan to head down for a run in two countries. As a bonus we would cross over the Zambezi River, with breathtaking views of the thundering Victoria Falls, twice during the run. 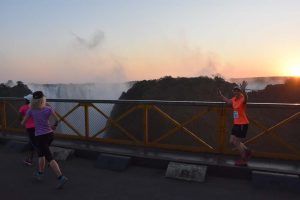 Jude and Anne-Marie crossing the bridge for the second time, now heading back into Zimbabwe for 2 loops 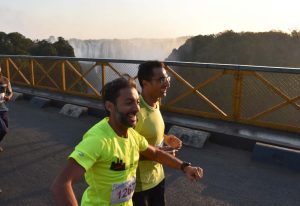 Hafiz and Annez crossing the bridge into Zambia

Training started with the Swaras each Saturday morning we were in town, our usual Wednesday evening in Karura Forest, and every other opportunity we could find to head out. We would both run the marathon, together with Anne-Marie, whilst Hafiz, Aneez and Mwai signed up for the half. We would also meet Anne-Marie’s sister Mo and her husband Steve down there as they were overlanding Africa in their vehicle.

Training went well, and we were running longer distances every week, until disaster struck. On one of our last long runs with the Swaras, Jon managed to run into a bollard… He didn’t know it at that moment, but he had just cancelled his run as a hematoma (an intramuscular bruise) was formed in his left thigh. Jude and Anne-Marie finished the long run, Jon walked a 10km loop, and together we joined Gerald for breakfast. The doctor later told Jon he wasn’t allowed to run for approximately 3-5 months!

Then, 2 weeks before the marathon Jude picked up a food poisoning and ended up in hospital, followed by a week in bed and on the sofa to try to recover…

But, flights were booked, and we flew down to meet the others who were already there. We nearly didn’t make it as we made a rooky error and forgot to change the time on our watches whilst waiting for our connecting flight in Johannesburg… And whilst Jude was wondering if it would be better to swap to the half, the others had already picked up her running kit for her, and so it remained a marathon…

The next morning Jon became the official team photographer for the remaining 4 runners. Anne-Marie and Jude started first in the semi-darkness, followed by the half-marathon runners Aneez, Hafiz and Mwai who started an hour later. 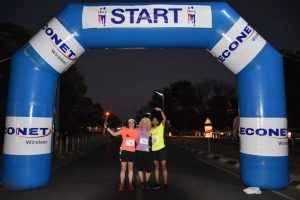 it’s still dark as we arrive at the start line (Jude, Anne-Marie and Hafiz)

Anne-Marie and Jude crossed the bridge together into Zambia, and back, before starting their two loops of the hilly course on the Zimbabwe side. The half marathon only did one loop after crossing the bridge. Soon after the bridge Anne-Marie pulled away and both were on their own. Half way through the course Jon, Mo and Steve were our cheer-squad and Mo even ran with us for a bit. 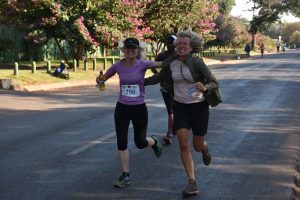 Mo giving Anne-Marie some dodgy stuff to drink (urine?) and running a few metres with her 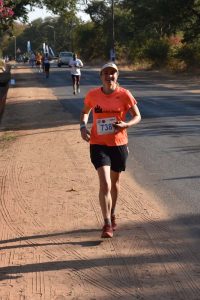 Jude arriving at the cheer squad

Part of the loop was through the Zambezi National Park and running there was lovely. Other sections were on the road and a little less interesting, but the crowds in certain places, especially around water stations, were uplifting. Luckily for us there were no elephants chasing us the wrong way, although we did see plenty of fresh elephant poo on the course. 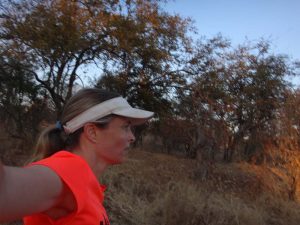 Jude running in the Zambezi NP 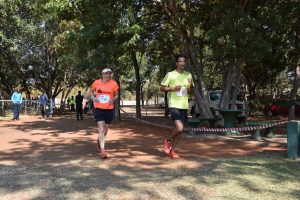 Jude entering the stadium, Aneez found her outside and joined for a few hundred metres 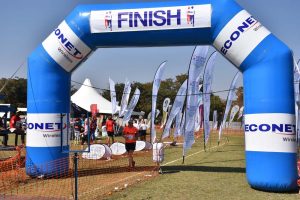 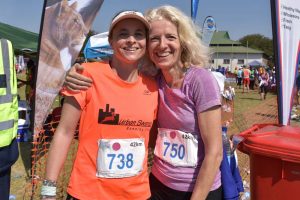 Jude and Anne-Marie, happy to have finished 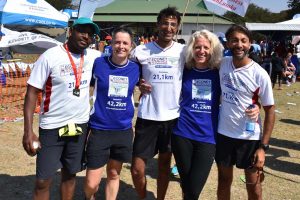 Now we have to find our next marathon or ultra destination… The only criteria we have is that it should be off-road and have some amazing scenery for us to enjoy whilst running, and preferably not be two loops of the same track. But for the right run we will consider doing two laps. Do you know a nice one? Do tell…! 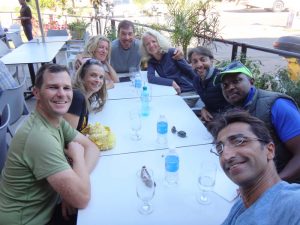 we all find a nice place to have a great lunch after the run – Jon, Jude, Mo, Steve, Anne-Marie, Hafiz, Mwai and Aneez