When we left the Tamgaly petroglyphs we had our radio on as we were hoping to catch up with Guy and Cheryl who were on their way west out of Almaty as we were approaching. We heard a call and stopped driving when we reached a highpoint, expecting them to be 20-30km away from us, driving towards Tamgaly (we had told them we were coming from that road). To our surprise they were more than 150km away in the hills south of Almaty. We could hear them perfectly and agreed to meet later that day. We ended up parking in a field close to Almaty and spent a great night together catching up on adventures. We won’t see them anymore on our travels as they are now heading back to Russia to enter Europe via the Ukraine. 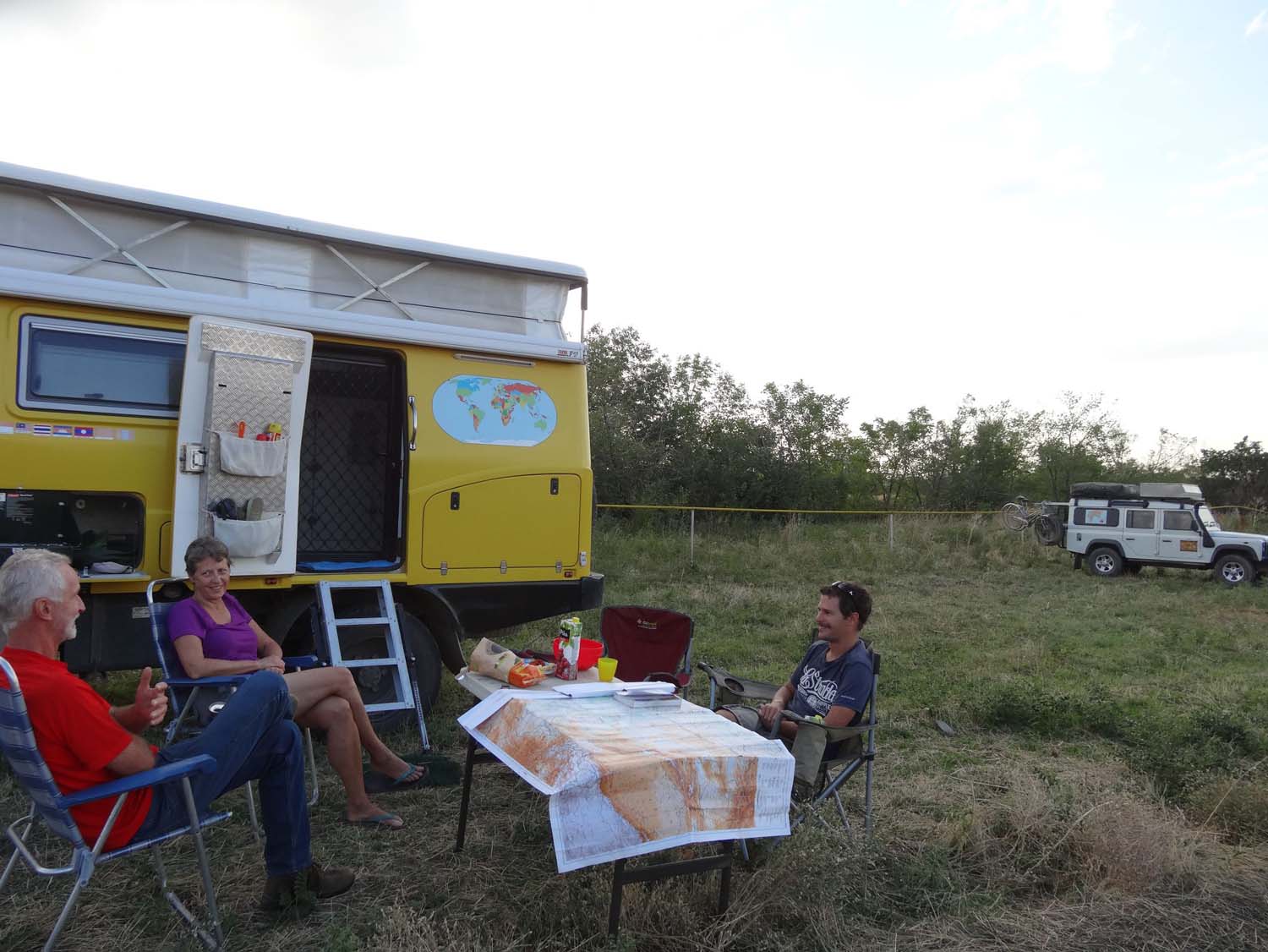 The next day we drove into Almaty on the back roads. Our goal in Almaty: pick up our remaining visas and have Lara serviced (yep, we have driven nearly 10.000km since her last service in Ulaanbaatar). Before our departure from Australia we were unable to get our Tajik, Uzbek, Turkmenistan and Iranian visas due to their application (date-wise) restrictions.

Our first stop was the Tajik embassy which we found easily. It was open and as we had already prepared the application forms, it was a quick process. They were extremely helpful, interested in where we wanted to go in Tajikistan and happy to add the GBAO permit we need to be allowed onto the Pamir Highway. They allowed us to pick up our visas the next day after 2pm.

Next: the Uzbek embassy. After reading stories on the internet we knew it was open for visa applications from 2pm. We arrived early and were told this is now 3pm. We left to do some other little jobs, including finding a place where we could do the application forms for Uzbekistan again as they need to be done online and we realized when we looked at them at the embassy that they had expired…

A quick lunch whilst waiting for the embassy to open up and that’s when chaos started. People pushing and shoving and the consul forcing his way through the crowds to get to the small gate. There are 4-5 guards, but they don’t do anything. Everybody was firing questions at him and he answered them once he was safely behind the gate. Once it was quiet we also asked our question: can we apply for a visa today. 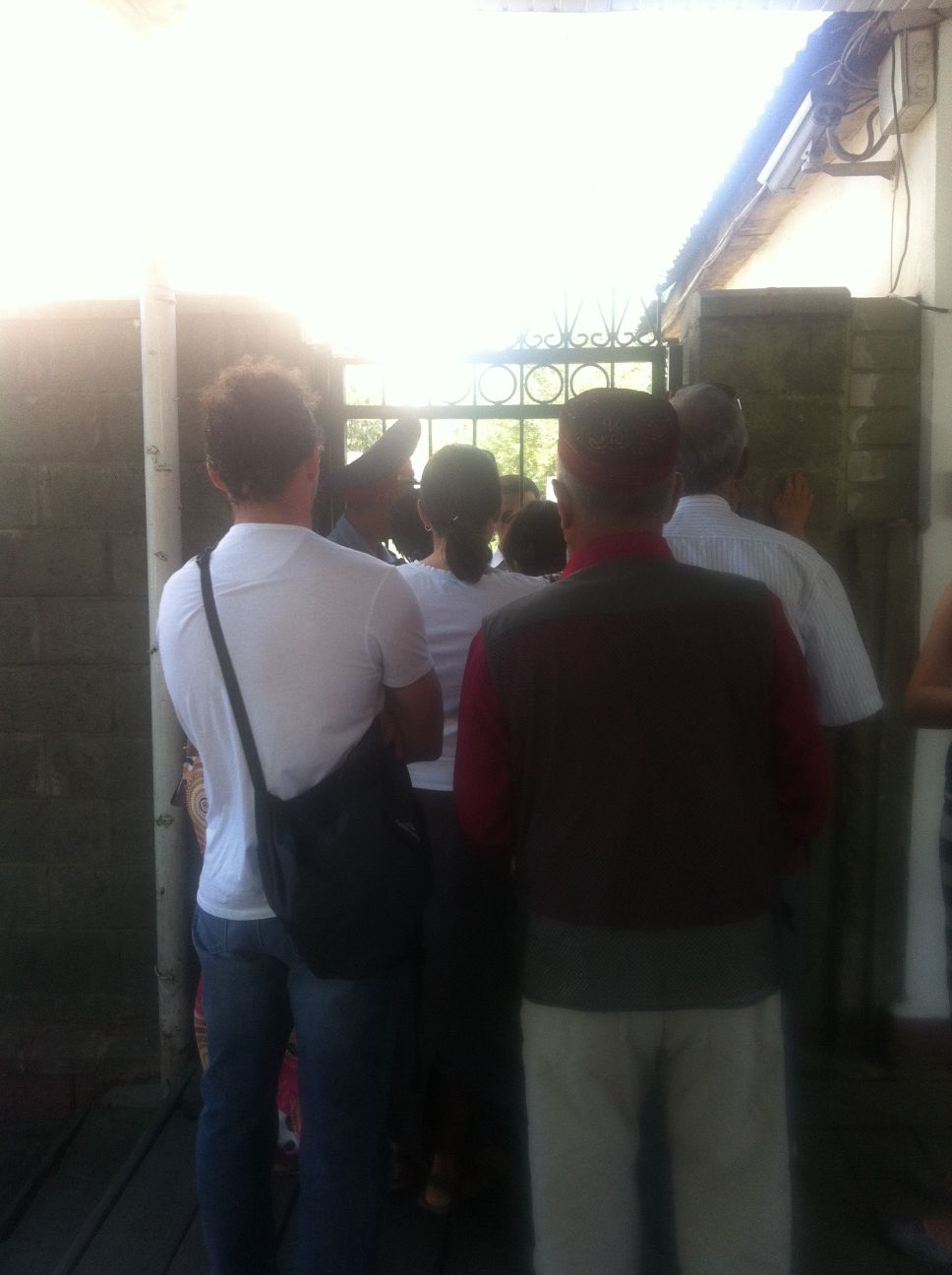 We could, but we had to wait. Some people were let into the gate and he left down a path next to a massive wall with them to another gate. Later we learned it was even harder to leave this place than it was getting in!

When we were finally allowed in, we entered a small room and were allowed to lodge our application after waiting another 15 minutes or so. We didn’t realise we needed a copy of our passports to apply so had to run back to the car to get some. We get to keep our originals, they add the visa into the actual passport when approved. A good system.

We were very pleased we had lodged these 2 visa applications and then realized there was also an Iranian consulate in Almaty (when we first searched for it, it only showed details of the Iranian embassy in Astana). Enthusiastic after our successes we drove there. It had moved. The guard gave us the new address, but by the time we got there it had just gone past 5pm. Jon went to have a look and was allowed in, they were very helpful and explained what we needed to apply for a visa. We planned to cycle up the massive hill the next day after we left Lara for her service at the Land Rover garage. Hard work without any gears, as the hill was too steep we had to walk a section.

Lara’s service was a routine question. They took all day to check everything, changing some of the bushes was the only thing needed apart from the usual things done at a 10.000km service. We used our bikes to search for English bookshops and a laundromat, both unsuccessfully. But we did pick up our Tajik visa plus permit and lodged our Iranian visa application which required us to find a specific bank in town, pay the fees and then ride to the top of the mountain where the Iranian consulate is now located. They said they would try to get it back within 2 days (express), but it might take 5-6 business days. 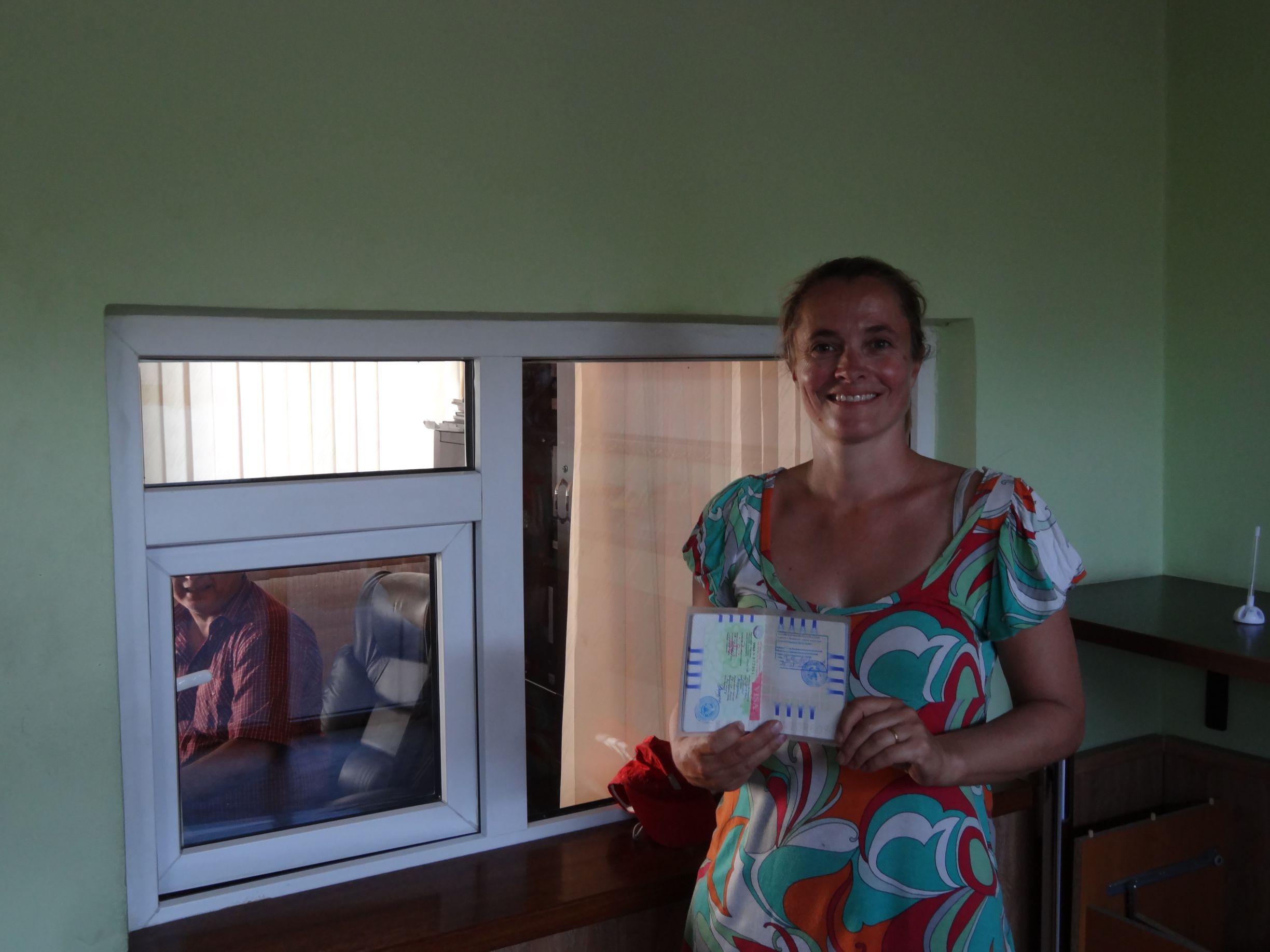 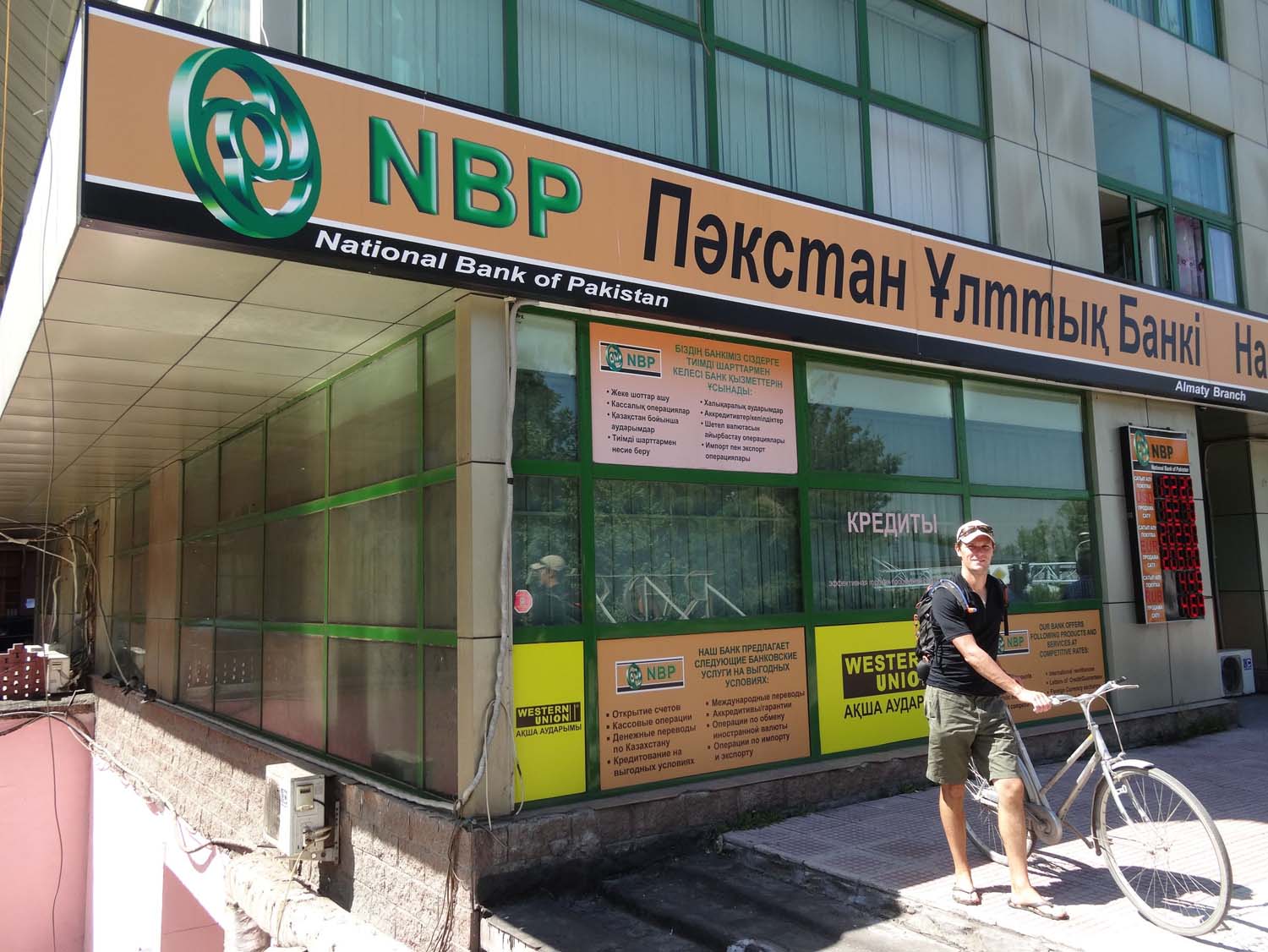 paying for our Iranian visas in the Pakistani bank – they serve the best tea ever! 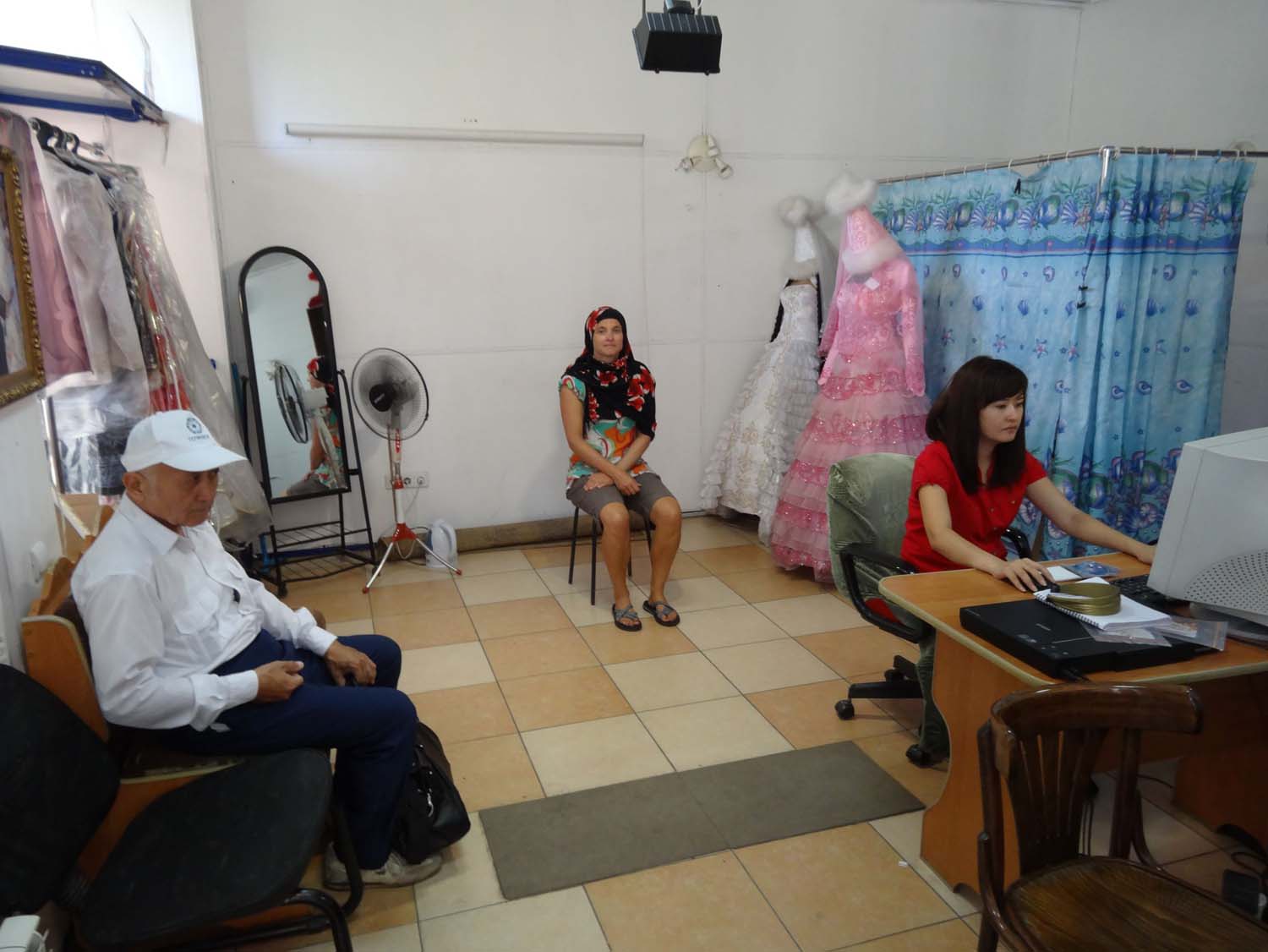 getting passport photos done to apply for my Iranian visa

Happy about our progress we did some sightseeing on the bike that day and drove Lara towards the Big Lake the next day. We bumped into Slovenian overlanders on our way up and hopped into their spare seat to get to the top. This is the location of an old space station and we walked around some very old, crumbling buildings whilst talking a lot about their route and plans as they had just driven up the way we were going next. Hopefully we’ll see them again in Slovenia as they were racing back in 10 days from Almaty to Slovenia as they had to return to work! 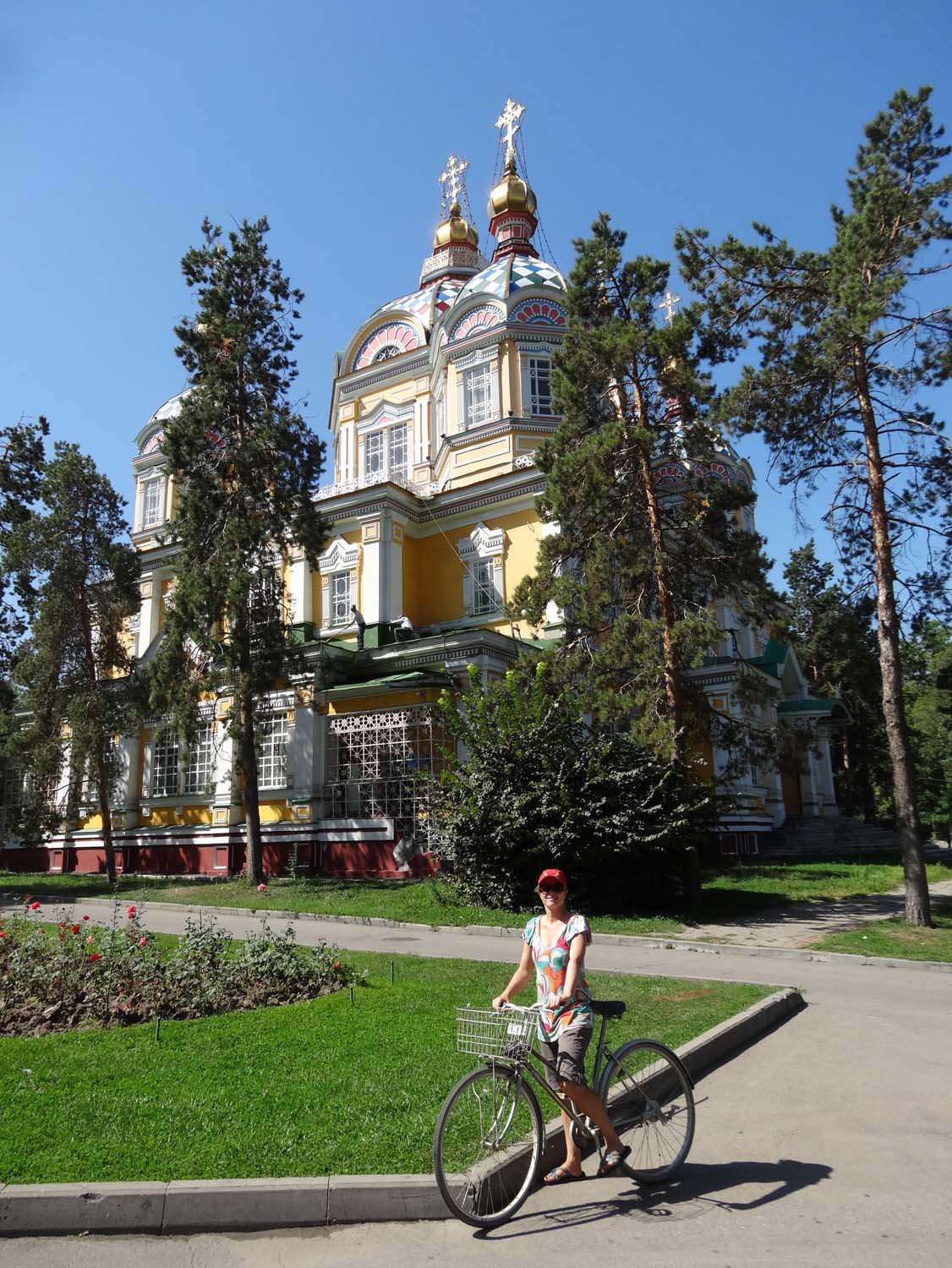 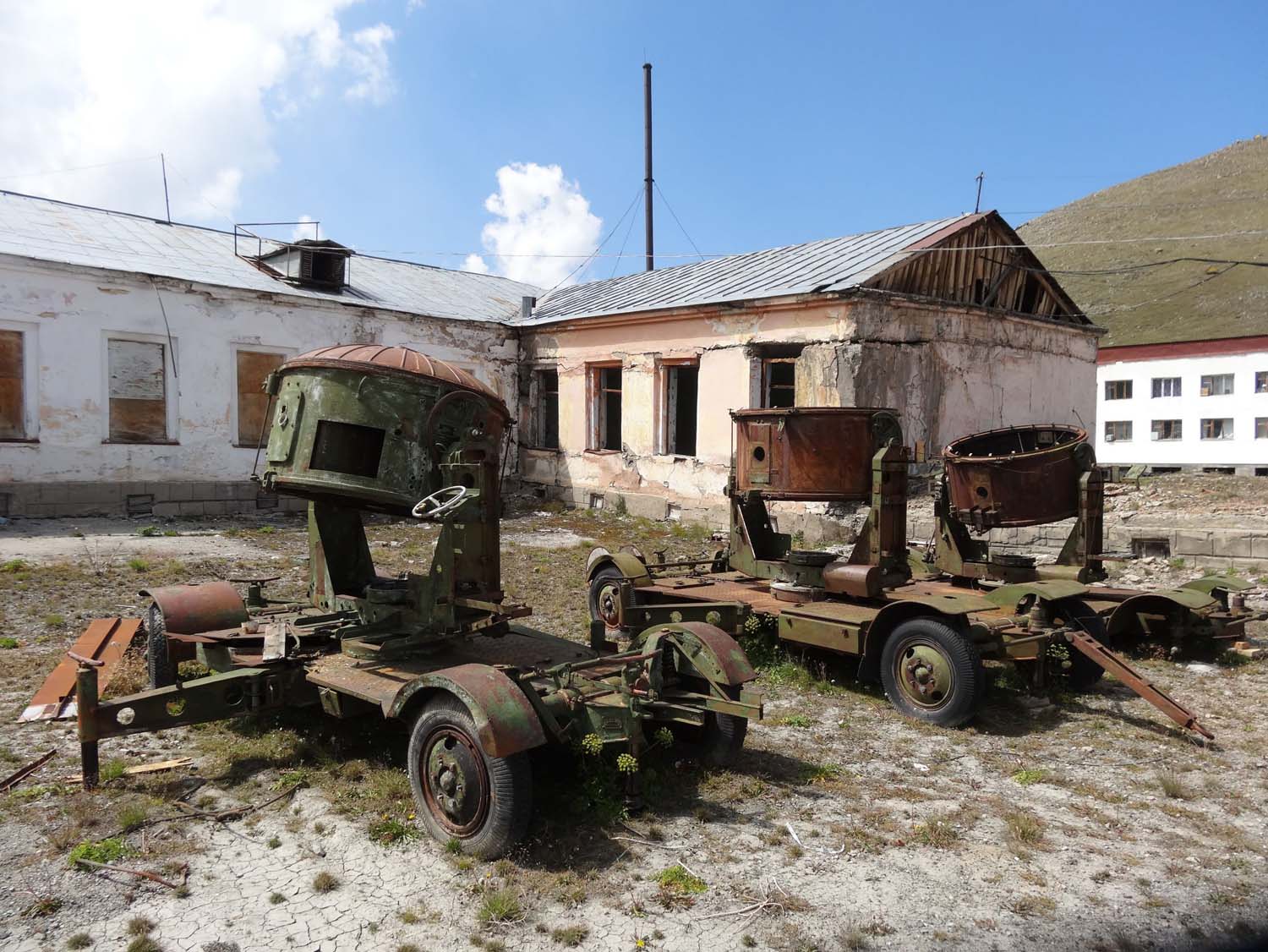 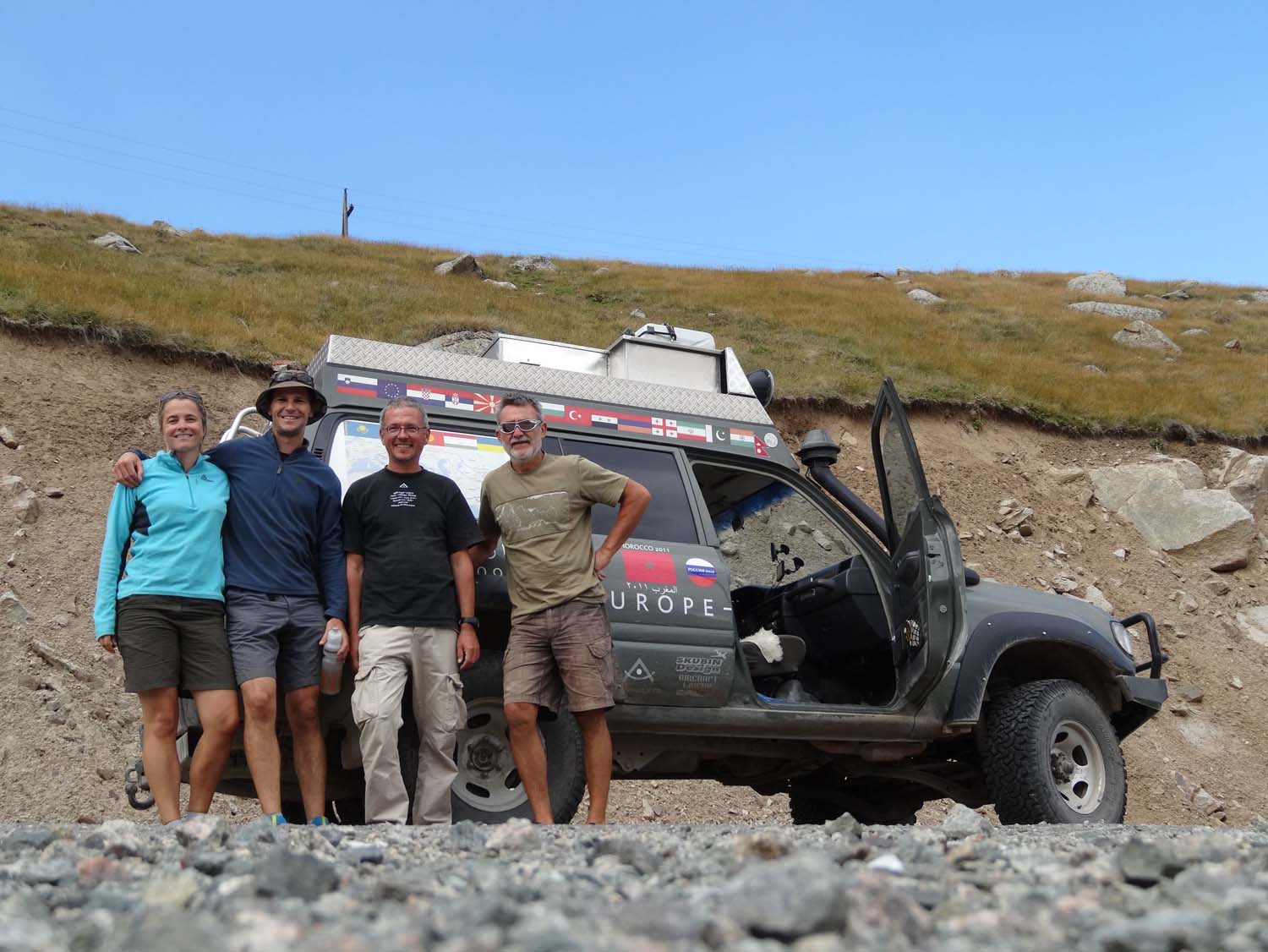 we jumped into the spare seat all the way to the top and asked 1000 questions – hopefully we will see them again in Slovenia (they were driving home after this in 10 days!)

When we dropped into the Iranian consulate the next day, they told us they would call if express had been possible, but as we knew we had to wait till Friday at least before we could pick up our Uzbek visa we decided to go to Kyrgyzstan first for a hike and come back in a week or so to pick them all up at once.

When we came back from Kyrgyzstan we first wanted to pick up the Uzbek one. We waited, queued, handed in our passports for the visas and waited some more… As we used different passports for our Uzbek and Iranian visas Jon decided to pick up the Iranian visas whilst I waited for the Uzbek ones. Of course, 5 minutes after Jon had managed to escape fort knox, the consul calls me and says we have given him the wrong passport for Jon. Oops. There is no other option then to wait, hope Jon manages to get back inside the Uzbek consulate or I can spot him from the second gate when somebsoy leaves (not often). 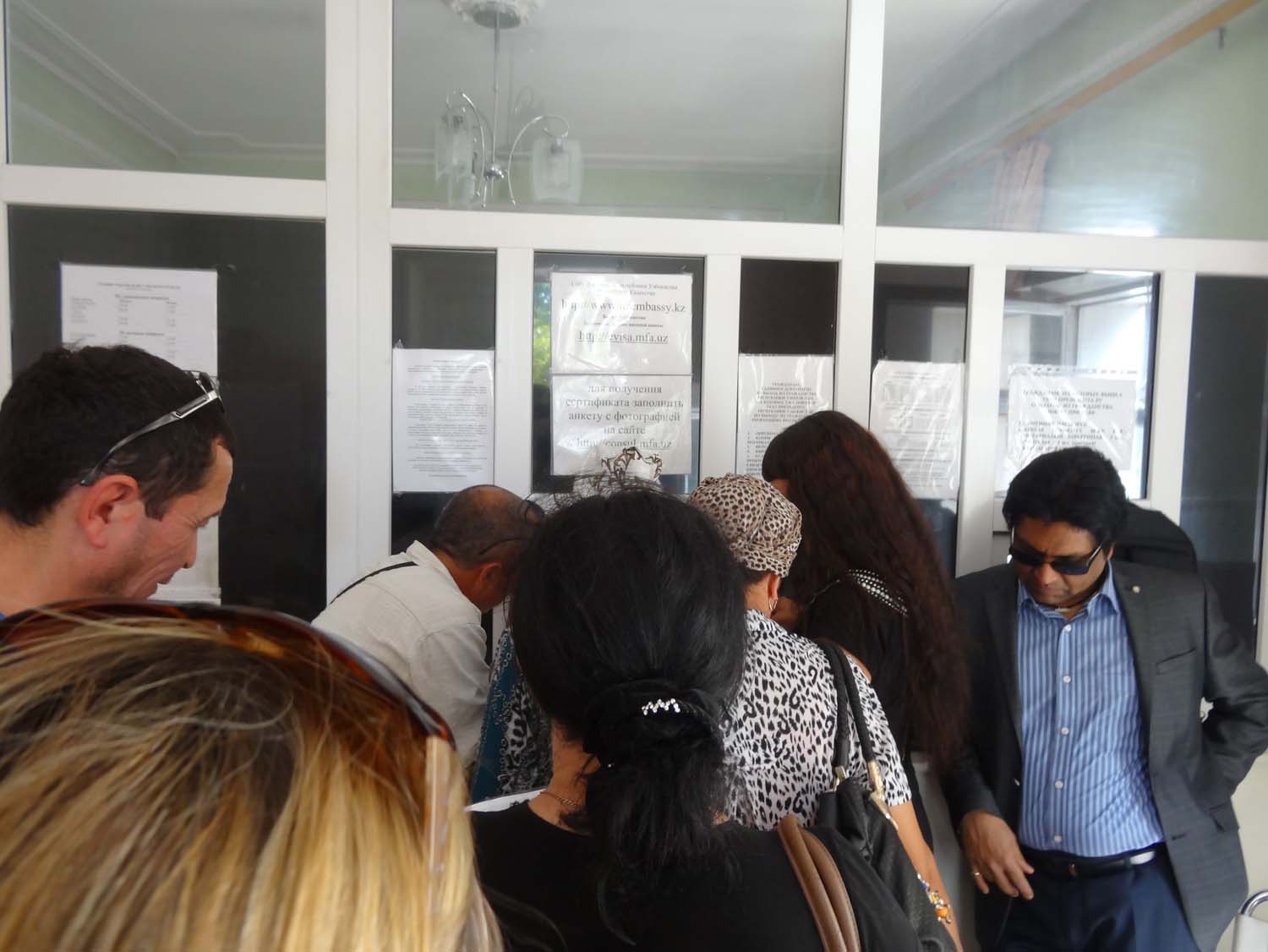 After a long wait somebody finally leaves and I spot Jon. I frantically wave to the guards trying to tell them to let him in and luckily they understand. I tell Jon about our stuff-up and we quickly hand in the correct passport. Back to the waiting, but this time Jon has brought our books so we don’t mind.

Another hour later we get our passports back: we now have 2 shiny new visas in our passports! And the best news: we have been given 30 days in Iran! 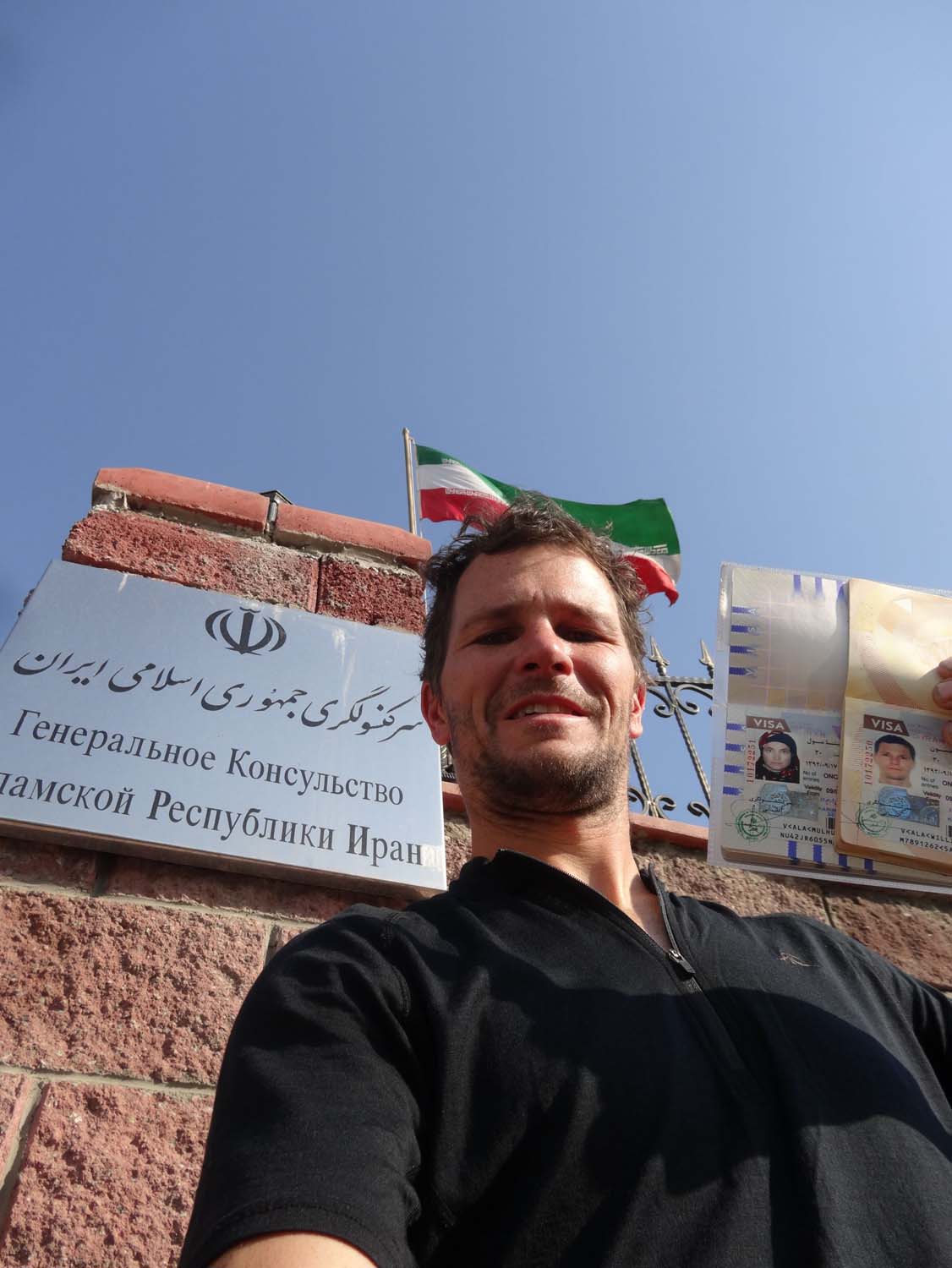 we were given 30 day visas for Iran – woohoooo! (check out Jude’s photo on the visa)

And the visa story doesn’t end here… As we now have our Iranian visa, we can apply for our Turkmenistan transit visa. This takes about 10 business days, but they allow the visa to be picked up in a different location to the one where you applied. This allows us to apply for it in Almaty and pick it up in Dushanbe in a month or so.

The day before Jude had gone to the embassy which is only open from 10-13. Again we were very lucky as the consul was there who was happy to explain the process and what we needed. The main issue being what to write in the letter requesting the visas.

The next day we go early and after only half an hour we get a bit of paper with a number and a date scribbled on it. That’s apparently all we need to pick up the visas in Dushanbe…. Lets hope it works! 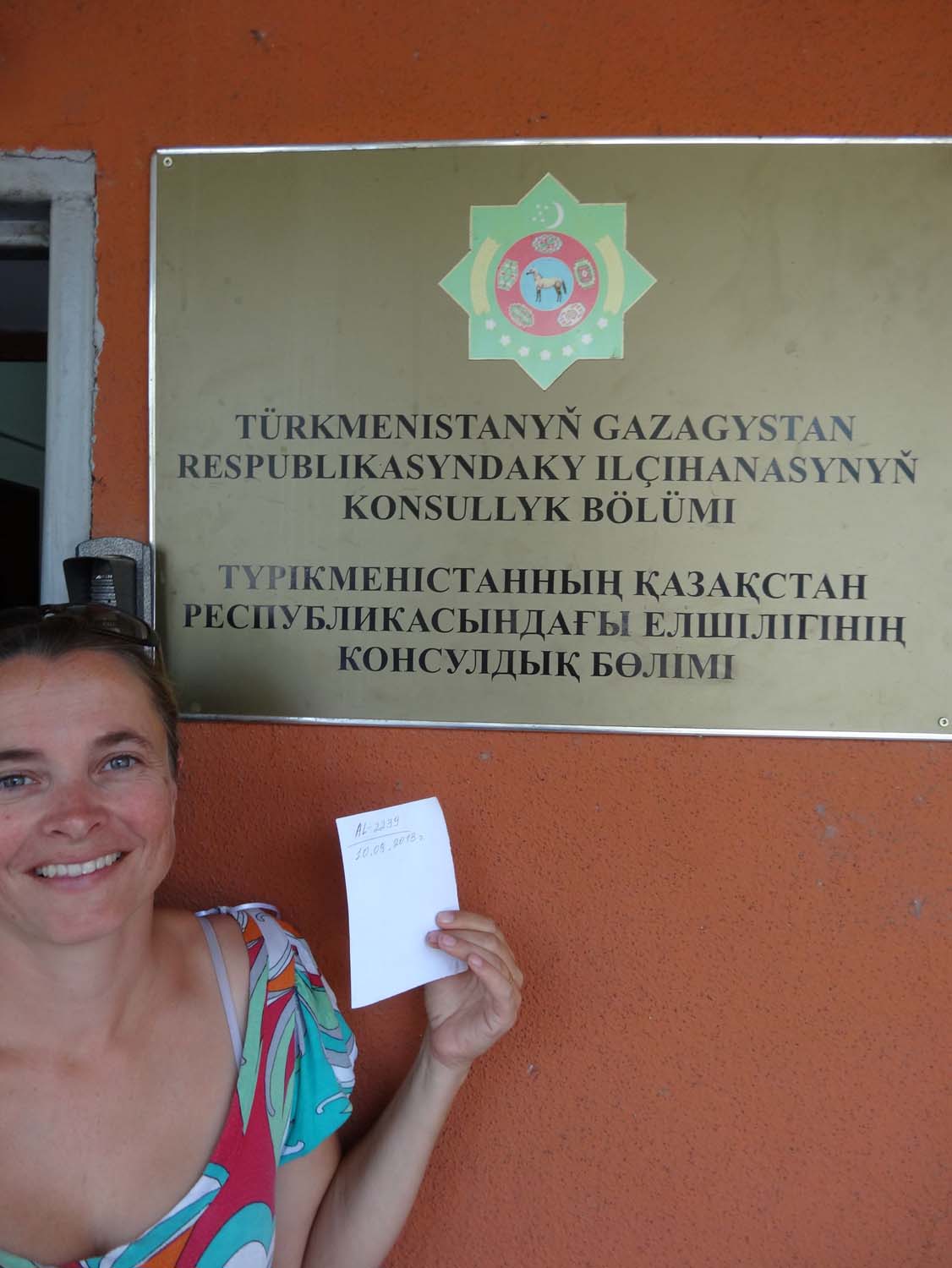 The rest of our time in Almaty was spent meeting friends of friends for dinner and a cuppa, dinners out, repairing our iphone which nearly got nicked and in the process developed a very badly cracked front screen, shopping in big supermarkets for the remote Pamir highway in Tajikistan and fixing Jude’s back tyre which had lots the valve (bad roads?). The latter was fixed for free by the national Kazakh mtb team mechanic Alexander. If you are ever in Almaty and need anything mtb related, look him up at his Crankmaster shop! 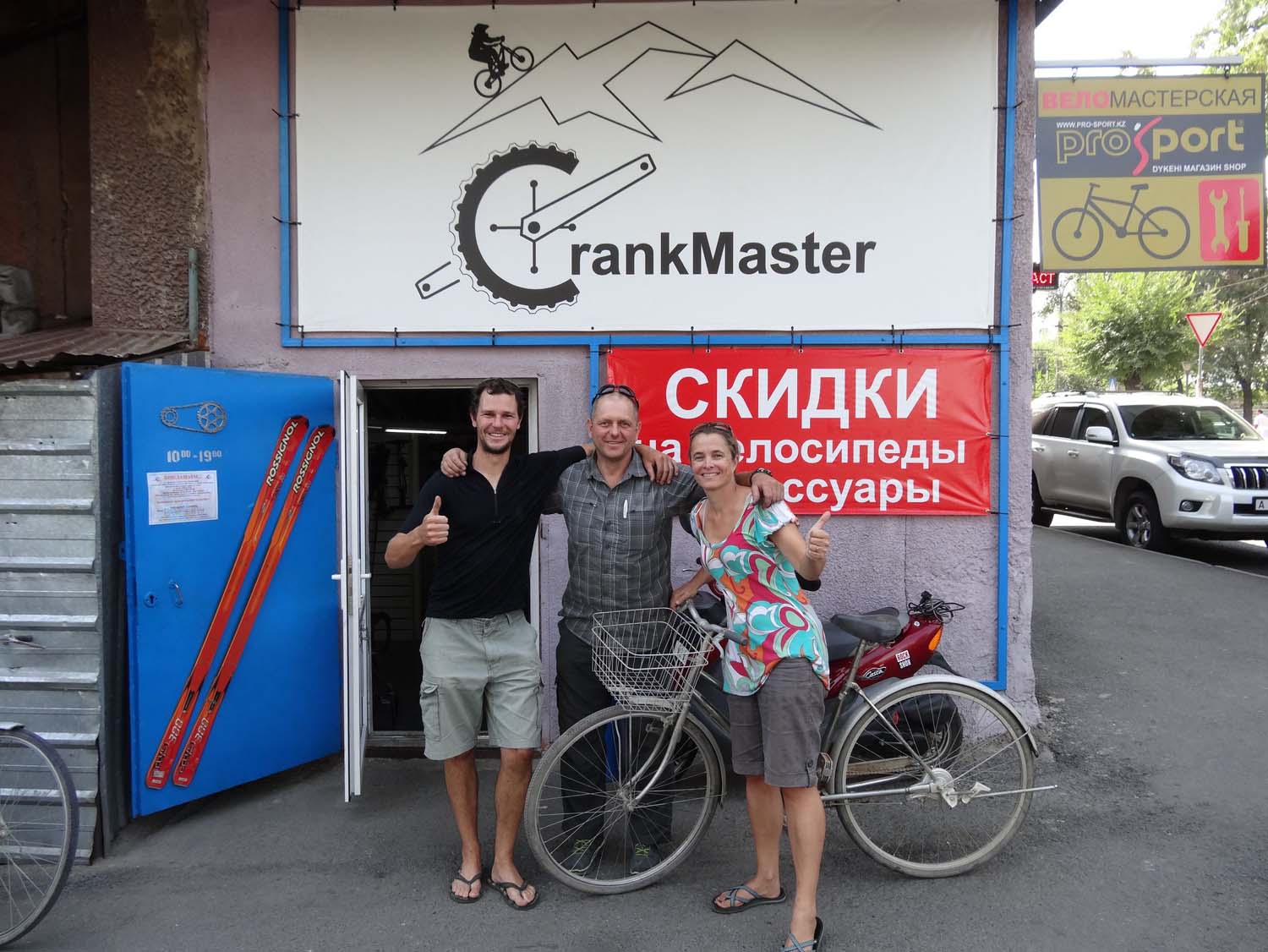 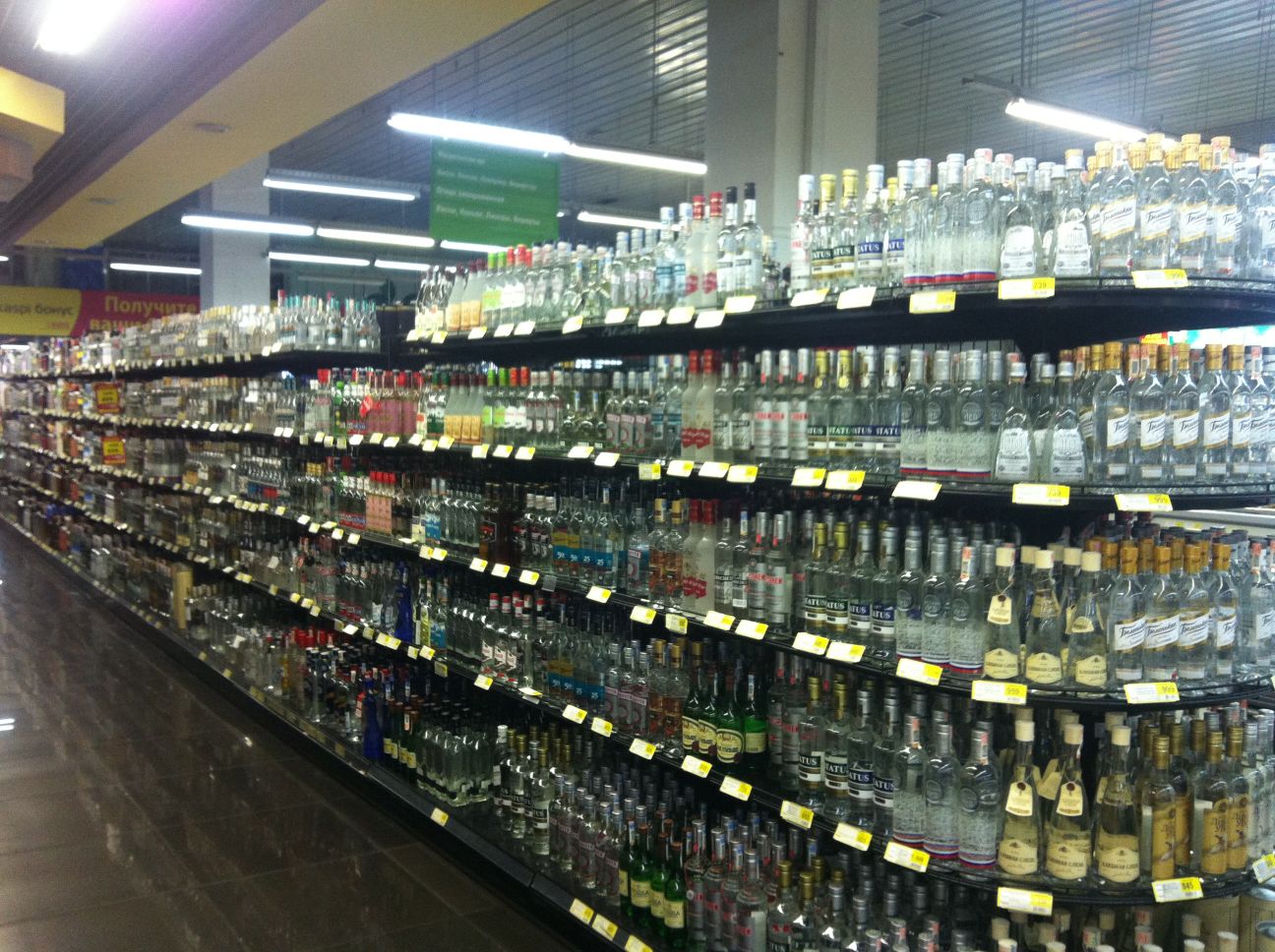 the choice of vodka in the supermarkets is absolutely staggering 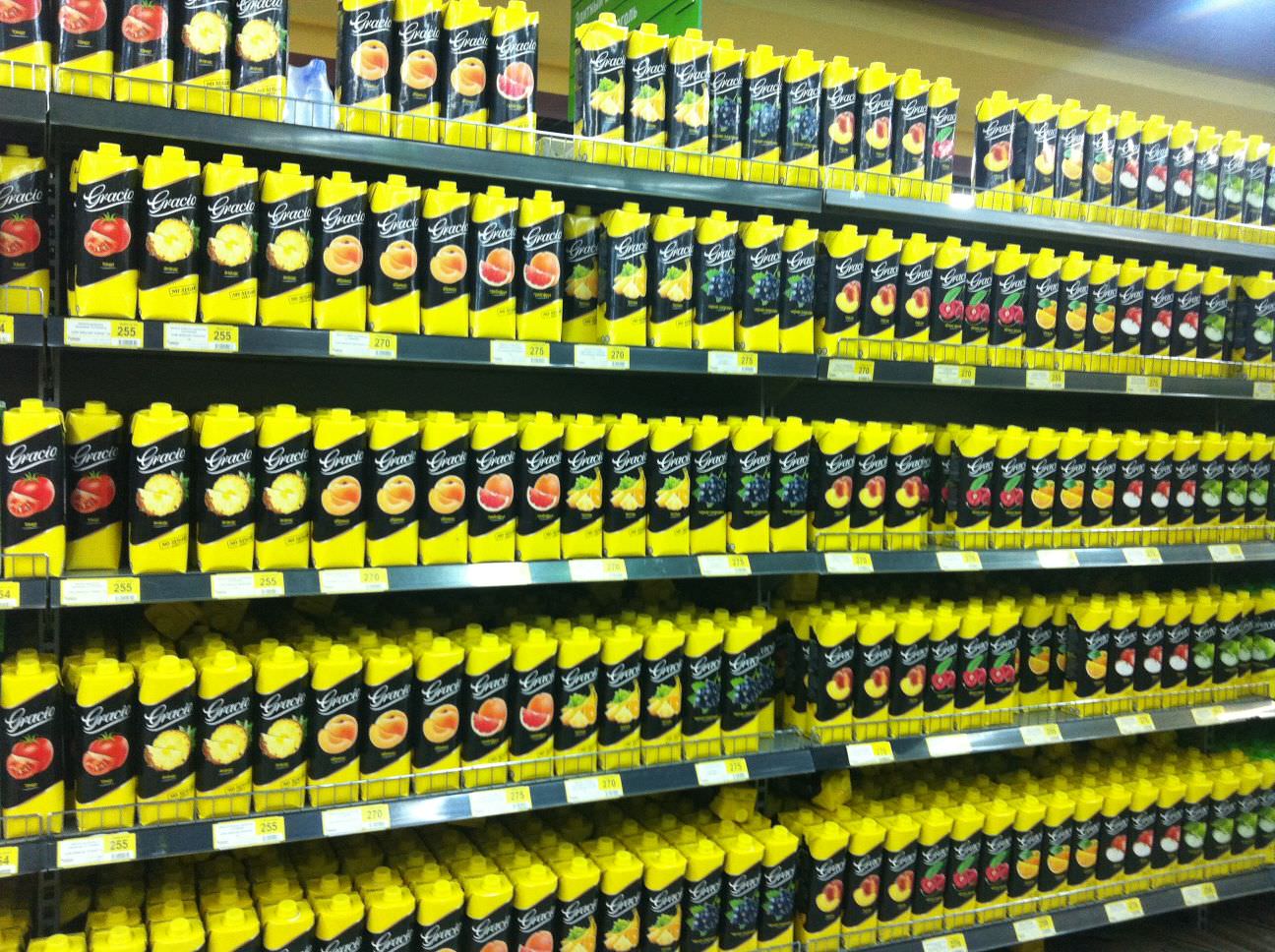 and the choice of juice is also amazing, this is just one of the brands available 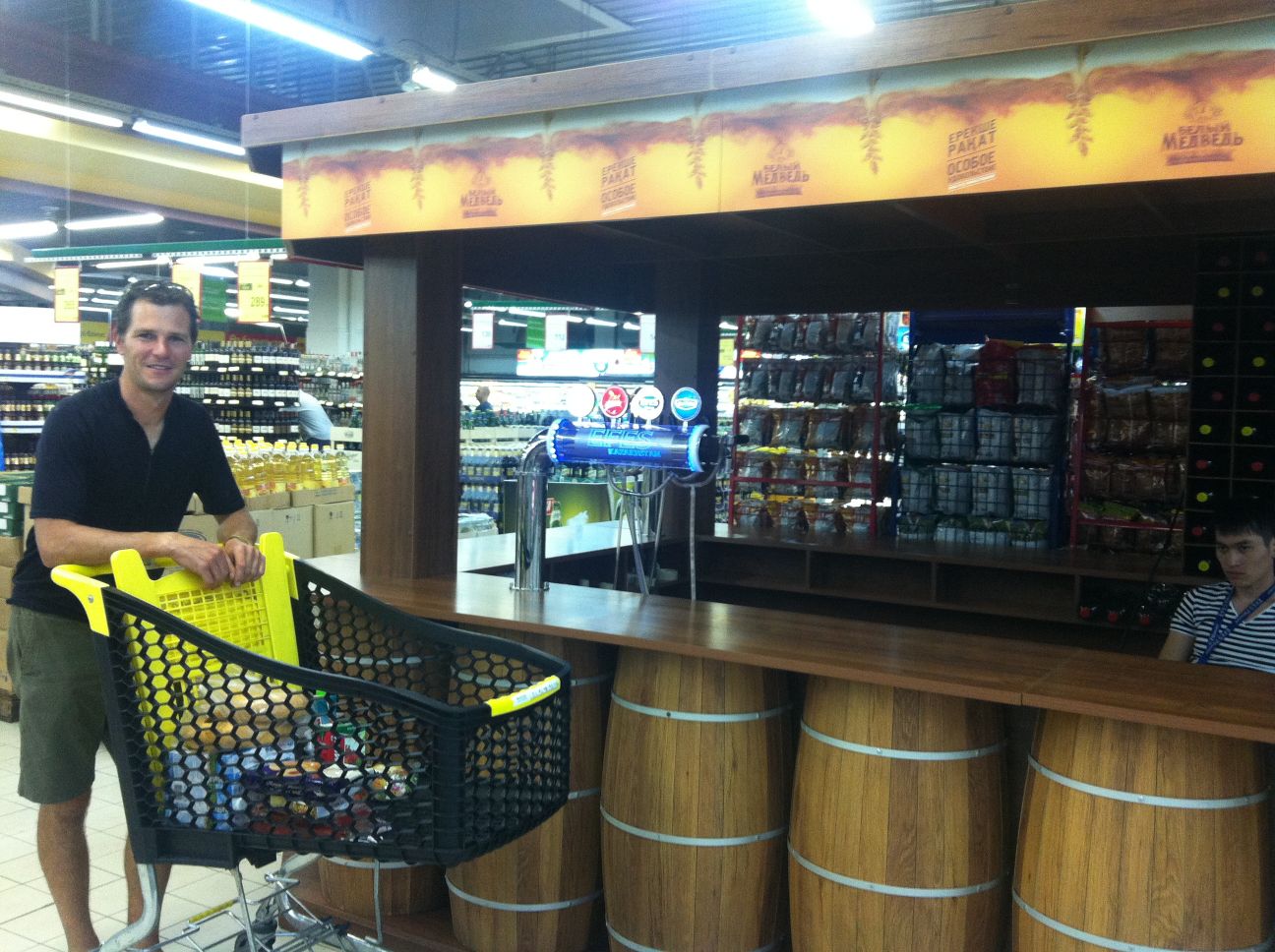 bar in the supermarket, why haven’t we got those yet?

But the highlight of Almaty for us is definitely a visit to the old Russian sauna where we get beaten up by a fat babushka with 2 birch leave ‘brushes’. 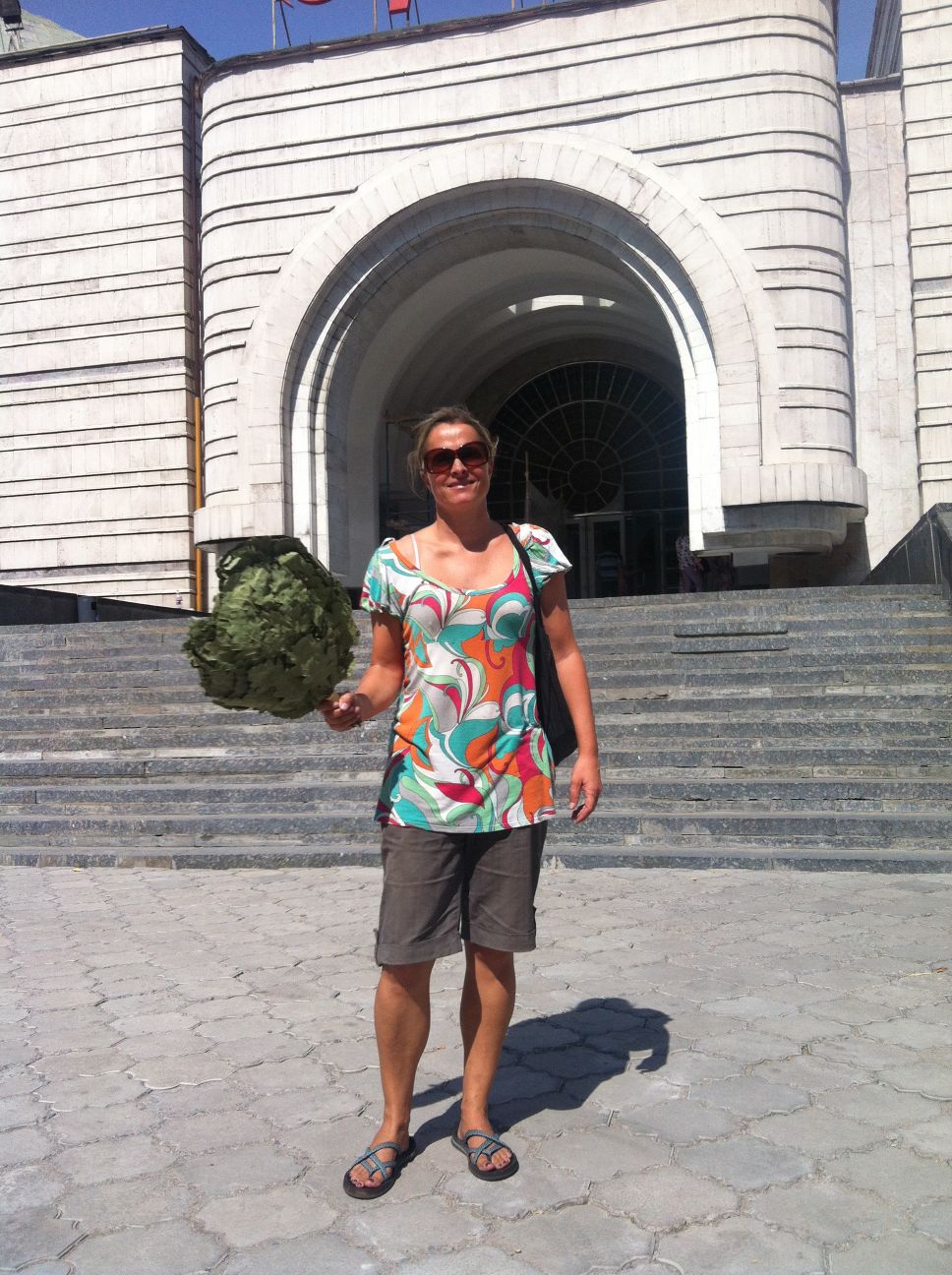 yes, we paid to have somebody use this to beat us in a stinking hot and steamy Russian sauna (and it was fantastic)