We were entered to do the Hardcore course, but on Saturday afternoon before the race Jon called the organisers (Simon and Robyn) to ask if they could swap us to the RAW (shorter) course as I was still not feeling great after spending a week in bed…

The day of the race I was still walking with my head in cotton wool and not feeling very energetic, but we set off at 6AM anyway to get to the registration on time. It was only a 2hr drive up to the Noosa Hinterland and just after 8AM we parked the car at the Teen Mission Camp.

At registration we were given team number 13 and the map for the course. It didn’t take us long to prepare the map as there were no options at all for shortcuts, no route choices either so the yellow line was quickly drawn on the map.

Around 9.30 we started with a quick dash to some maps for the initial 3 CP’s we had to collect in any order on foot. They were all close to HQ and we found ourselves jogging with the rest of the teams through the mud to collect them. We were one of the first teams to hand in our control card for this section and off we were again on foot to collect A, B, C, D, E and F in order, looping back to HQ again. After a steep climb some teams overtook us as we had trouble locating C. The description wasn’t very correct unfortunately… As a few teams ran past us we decided to take it easy as I had trouble breathing. 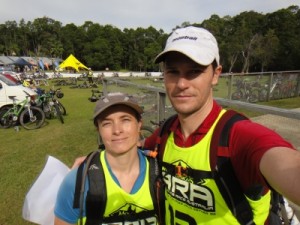 Back at HQ we hopped on the bikes and picked up CP 1 and 2 on the way to the lake for a paddle. On arrival we were told we were the first ones there, which we didn’t believe, and we set off to pick up the 3 CP’s on the lake in any order. We went from G to H and then picked up J last. When we dropped off the kayak we were told we were still in the lead so we decided to try to keep it that way. We quickly picked up 4 and 5, but had a bit of trouble finding the last one on the mtb. Number 6 took us a few minutes, but no other teams had still arrived when we finally found it. Raced back to HQ to dump the bikes and pick up the last mystery control.

To be allowed to punch this last control we had to do an obstacle course, including running through 1cm deep mud after we had already been up to our knees in it previoulsy 🙂

A solo competitor who had been close to us during the ride as well was getting very close so Jon dragged me up the hill towards the finishing shute – hand in hand we crossed the line in first position!! We won $100 voucher each plus an Outer Edge subscription for a year. 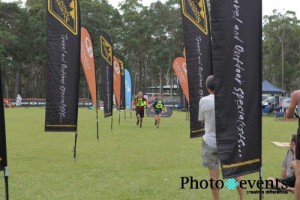 running down to the finish line 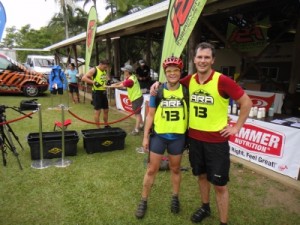 posing for the finishing photo 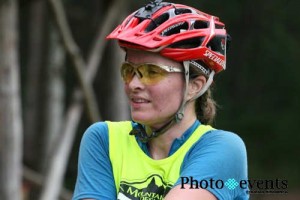 We met Liam, Michael and Craig and after the prize giving ceremony we drove to Noosa to check it out and have dinner. I was pretty exhausted after such a short race, but very happy! Team Woop Woop has it’s first win on the East Coast 🙂 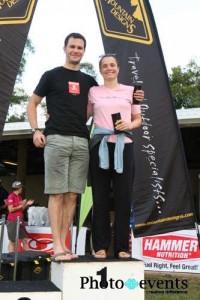 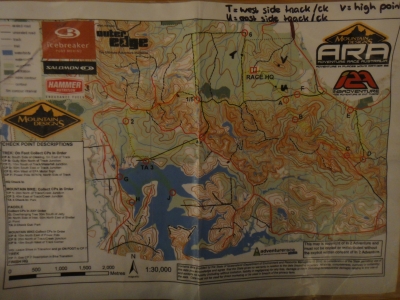