For those interested in overlanding the title of this blog is obvious. But it might not be for anyone who has never contemplated packing up his or her life into a tiny, moveable space, and drive around the world. But to let those people in on a little secret, Abeneuer Allrad is the name of the best expo in the world when it comes to all things related to four-wheel-driving and exploring the world in your choice of vehicle.

Abentuer Allrad is a 4-day event held every year in Bad-Kissingen, Germany. During those days thousands of overland vehicles, and plenty of wannabees, arrive in Bad-Kissingen. They all camp in the make-shift campsite that pops up every year in some empty fields, and most visit the expo at least once in those four days. The other days people just wander the campsite, in search of a vehicle for sale, or to find inspiration among the varieties of transport. Or they catch up with friends from around the globe as many attend the expo every year. We did all of the above.

It had always been on our wish-list of places to visit and things to do, ever since we became part of the ‘overlander-family’, but we were never in Europe at the right time. But this year it all worked out perfectly. We flew to Frankfurt, the nearest big airport, and caught up with Lojze, who we met in Kazakhstan during our trip from Singapore to London, and we caught up with him and Petra at their home when we passed through Slovenia later in the trip. It was great to catch up for breakfast at the airport, we hadn’t seen him for five years. Time was too short as always. 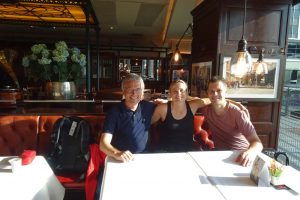 Lojze, Jude and Jon having a great catch up (and breakfast) in Frankfurt airport after 5 years

After picking up a rental car we drove to Bad-Kissingen, we certainly didn’t look like we belonged on the overlanding campground… It was Wednesday lunchtime when we arrived (a day before the start of the expo) and the place was already packed! And a steady stream of vehicles continued to pour into the ever-expanding campground. We followed a massive 12-ton Australian overland truck as we searched for the Danish section. Bjorn and Dorthe had arrived the day before already and had saved us a spot.

Bjørn and Dorthe, plus their two young kids Vilmer and Ingeborg, had just started their travels, leaving Denmark a few days earlier. We were very happy to catch them at the start of their big trip. They sold their house and now call a grey Defender ‘home’. It’s a little cramped at the moment as they are waiting for delivery of their trailer, but with one roof top tent on the roof, it looks pretty cool already. 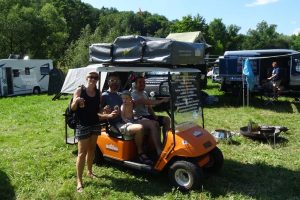 Our first afternoon together we talked a lot, walked around the expanding campsite for our first reminder of this ‘overlanding’ world, and cooked our food on the open fire next to our camp. It was great to catch up, spend some time together and share lots of laughs. 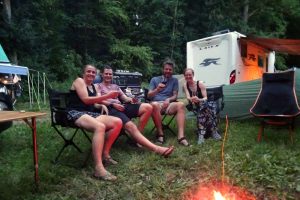 enjoying time around the campfire after the kids have gone to bed, just like the old days

The next morning Jude was up early, the entire campsite was still asleep when she walked to the showers, only to find them closed for another hour or so. After a good breakfast we joined the crowd, queuing for tickets, then queuing for the bus, but, in typical German style, it all went super smooth and fast. And then we finally arrived at the expo, and it didn’t disappoint.

Our first planned stop was Iglehaut to have a chat about their conversion of the Mercedes Sprinter to a proper 4wd. It’s a good thing we did as we realised it would add about 35,000 EUR to the van, just to get a proper 4wd. Our next chat with the Iveco guys made us realise that buying a new Iveco 4wd truck was also not an option. Not only are they super expensive, but the size we were interested in wouldn’t allow us to build anything on the tray as the maximum allowed weight is 3,5 ton (perfect to drive on a normal car licence). The cab plus tray alone however, weighs nearly 3 ton, leaving only 500kg to build a box on the back for our living quarters… 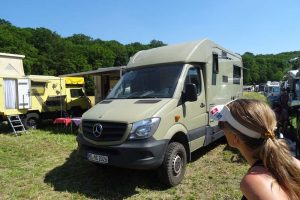 we really liked the Sprinter 4wd van (this one specifically), unfortunately it is not a proper 4wd

We had to come up with another solution for a potential new vehicle for our next trip as the Mercedes Sprinter and the new Iveco trucks were now eliminated, leaving us with…. nothing, as we weren’t interested in a Land Rover Defender or Land Cruiser with a roof top tent or pop top tent. After our big trip we realised that this time we were looking for something where we can sleep inside the car without people knowing we are there (so you can sleep incognito in a carpark or city if you have to). We also want the ability to go to the toilet inside, again for the few times it isn’t possible to go somewhere outside, like when parked in a normal carpark without facilities.

Slowly we made our way through most of the expo, chatting to owners of cars, and employees of companies like Custom Camper, Tom’s Fahrzeugtechnick, Alpha Cab, Woelcke, Pick me up, Uaz, Brain Boxx, Twiga Travel Cars, Azalai, and many more. That is how we discovered the 4wd plus box option. 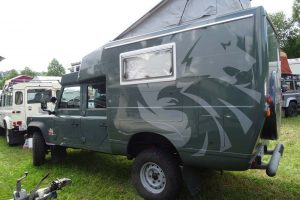 we saw many amazing vehicles, but most were very expensive 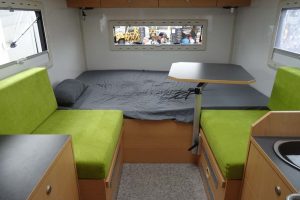 this set-up was quite interesting but we didn’t really mind pitching the roof top tent every day, so we probably don’t mind turning a table into a bed either 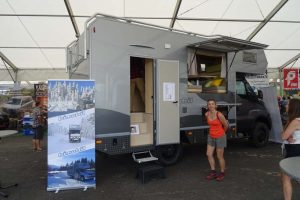 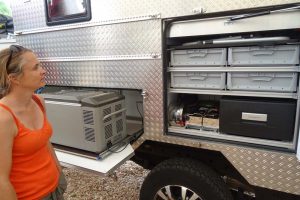 we like the idea of an outdoor kitchen, this is another option, we also like the cheap plastic boxes that turn ino drawers

In Australia you either see 4wd’s with a roof top tent (sometimes a pop-up), or utes with a slide-on on the back. Neither of which appeal to us. You never see a 4wd with a box. And that seemed, to us, the perfect solution. We talked to so many companies, all offering essentially the same thing. They build boxes (the living areas) that are mounted onto the back of a 4wd. We saw them on the back of Land Rover Defenders, Mercedes G-wagons, and Iveco trucks, but the majority at the expo were built on a variety of Land Cruisers. But when you talk to them, they all agree they can build a box for any 4wd (cars and trucks). Some, like Brain Boxx and 4Wheel24, only build the boxes, leaving you to work on the interior. 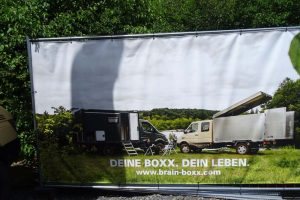 we even found some companies who make the boxes you can put on the back of a car or truck, and these are well-insulated boxes

Talking to Tom’s Fahrzeugtechnick and Extrem Fahrzeuge, we also realised it is going to be very expensive for us to use a new car. Not only for the normal reason that a car looses half it’s value after 100m driven from the showroom, but also because in Europe they don’t build diesel Landcruisers anymore. And the above mentioned companies are the only ones who import them from the UAE. If you buy the new vehicle through them it will cost around 75,000EUR. Add another 70,000EUR for the complete box and you’re looking at 150,000EUR before you can drive away. Oh, and most companies now have a waiting list of anything between nine months and three years for your car to be finished….! 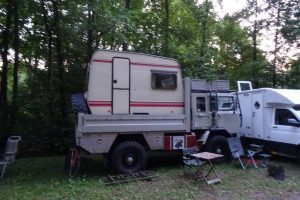 I guess we can always go for the easy option… 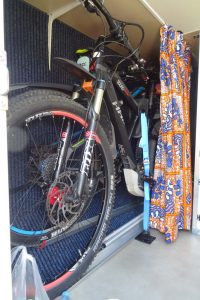 some people even had mountain bikes inside their homes, good to see that can be done too although we prefer them not inside… 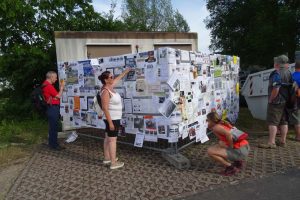 you can try to find something you like on the wall of second-hand vehicles, people were definitely buying and selling 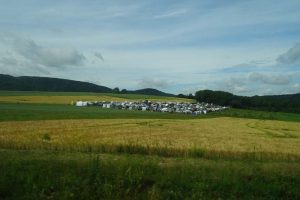 one of the additional campsites spread all over the place in the fields, the whole setup really is amazing 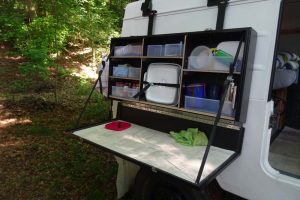 we loved some of the solutions people had for certain things, this is definitely something we will remember

We came up with the following plan based on all the information we gathered at the expo and campsite. We are going to look for a second-hand Land Cruiser in Australia. Preferably a cab with nothing on the back. And then we are going to get one of the companies to build us an empty, or part-completed box. It will already have the door and all windows built-in, as well as possibly a few other things. And then we will finish the interior ourselves. It gives us full flexibility on the design, and it will make it a lot cheaper to get what we want. Well, that’s the plan for now anyway… It might change again, who knows. At least we have a good idea what is out on the market nowadays and what is possible.

That night we walked around the campsite again, talking to people and admiring the interiors of cars and trucks. We queued for pizzas, and had another lovely night around the campfire with Bjørn and Dorthe and some others including Will from Jersey who had ridden his motorbike across to determine what truck he wanted for his upcoming adventure. He was looking at the opposite side of the spectrum and going big (12-ton truck). 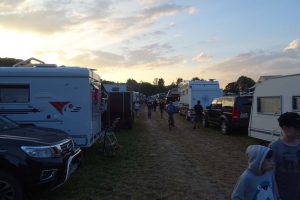 ‘our street’ on campground 1 which appeared to be the biggest, It was awesome to walk around and peak into people’s homes

The next day was more or less a repeat of the first one. We started with walking on the campsite, but quickly realised most people are at the expo during the opening hours of 10-6 so you can look at the outside of vehicles, but can’t chat to the owners as they aren’t home. We were very happy we went back and explored the sections we hadn’t seen yet as we discovered a G-wagon with a box that had a hard roof opening up. Very interesting. It created a lot more light on the inside and still allowed the owners to sleep inside with the roof down. Of course they also can build the box for other cars, so this might be the company we will use for the box. 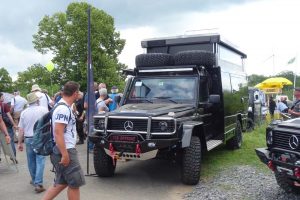 and then we saw this one, we don’t like it on the G-wagon, but loved the box with the fixed roof panels that pop up 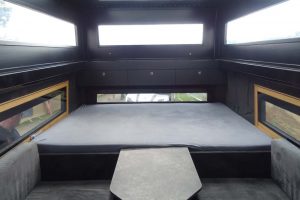 After another night around the campfire it was time to say goodbye again. We had a flight to catch to London for James’ christening and a good catch up with lots of friends. It had been worth it coming here, we learned a lot and are quite excited about all the ideas we have now for our new vehicle. We’re not sure yet when she will eventually be ready to travel, and when our travels will start (or where). But one thing is certain, a new overlanding vehicle and trip are in the making…. 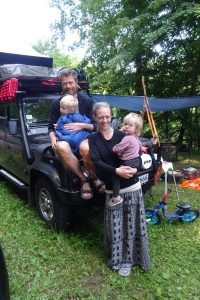 saying goodbye to the Wils family who had just started their big trip with their cool Defender. We were super happy we had been able to catch up with them at the beginning of the trip and look forward to hearing all their stories to make us jealous…