From November to April it’s the rainy season in Kitulo NP. Doesn’t sound like a good time to go for some hikes, but it is. Because of the rains, the flowers are out en masse and depending on the time you visit you can see anything from 45 orchids to countless other flowers in bloom! It is one of the greatest wild flower gardens of the world.

It was another early start for our Fastjet flight to Mbeya. Not great when the alarm goes off, but when you land in Mbeya just after 8am you still have the whole day in front of you.

We were picked up from the airport by Jafar, our guide, and Owin, our driver, and driven straight to Kitulo NP, about a 2 hour drive. Kitulo NP is high, between 2500 and 3000m, which means it is a lot cooler than Dar es Salaam at the moment. We noticed the drop in temperature as we drove up nearly all the way from Mbeya, and even Mbeya is already at 1700m (very similar to Nairobi!). It was a nice change from always being so hot!

After a quick lunch we started our first hike up to the Matemba Ridgeline. We could start the walk straight from the campsite and the lesson in flowers began immediately. We saw our first orchids, spotted the beautiful malachite sunbird (a first for us) and were excited to see another new bird – the common stonechat. 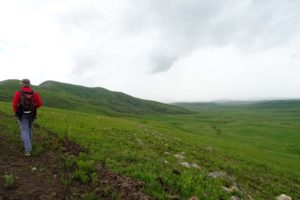 Jon on the way to the top of Matemba Ridge, our highpoint of the day was 2874m 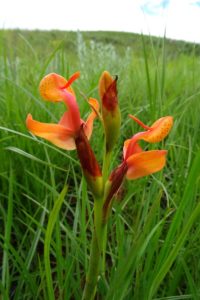 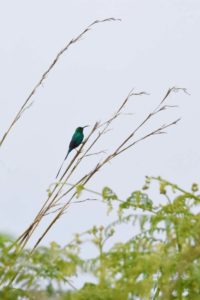 a new one for us, a malachite sunbird – very pretty 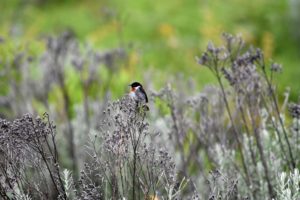 another first bird, this time a common stonechat

We stopped regularly on our way up to look at some more flowers, check out the amazing vistas around us and catch our breath. Nearly at the top a bush duiker kept us entertained for a while and a beautiful auger buzzard flew past on the thermals. 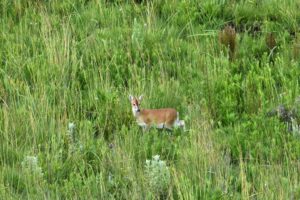 the common bush duiker in Kitulo NP, quite shy

We covered 6km that day. A bit different from our usual safari weekends when we just sit in the back of an open vehicle, looking for animals. It was so nice to be able to go hiking again and walk wherever we wanted. 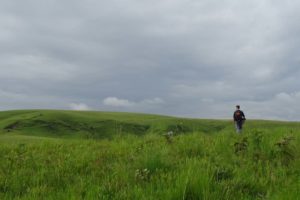 Jon in Kitulo NP, you can walk anywhere you want

At night the heavens opened and before falling asleep we listened to the rain on the roof of the tent. The next morning was again sunny and dry, we were very lucky, and soon we were on our way again for another hike. 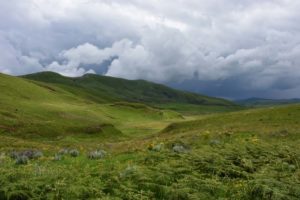 view towards Matemba Ridge in Kitulo NP from our camp site 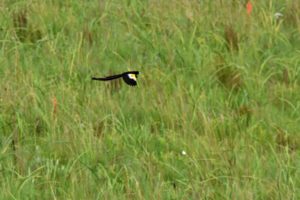 more firsts this weekend, a montane marsh widowbird, a male in his breeding plumage

One of the flowers on display when we were there was the red hot poker, kniphofia grantii. It is a beautiful flower, red with yellow, and after walking more than 12km the next day we arrived at a field full of them! It was an amazing sight. 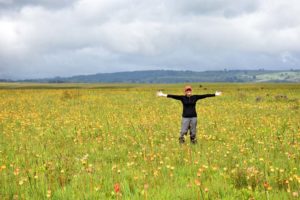 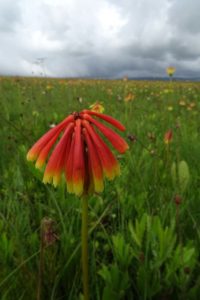 After finishing snapping lots of pictures of the red hot pokers, our driver picked us up by the side of the road to drop us at our next stop – another patch of grass with flowers where we would be looking for the Denham’s bustard. Yep, we are getting really twitchy (bird-watching) now and were keen to see this ‘new’ bird. We did find one, just before it started to rain, and it was a pretty cool bird. The rest of the walk was in the rain and we didn’t find any others, so we hopped back in the car to slowly start the drive back to Mbeya for our flight back to Dar. 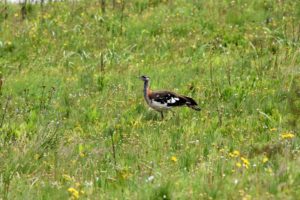 the Denham’s bustard in Kitulo NP, another first for us

That didn’t go as planned… as soon as we left the all-weather section of the road we were forced to stop because a truck was stuck in the thick, red mud. We watched a little while and luckily soon the driver was able to get started again… before getting stuck again just around the corner. A 4wd was able to squeeze past, but after deliberating a while and trying to find another option, the driver of that vehicle appeared again, this time on foot. Turned out that around the next corner yet another truck had gotten stuck in the mud and now the 4wd was in between 2 stuck trucks.

Owin, our driver, and Jafar decided we would go back and take the long way around, hoping no trucks would be stuck on that section. We did and after a few hours going the wrong way on dirt tracks, before getting back on the main road, we reached the airport. It cost us 2 speeding tickets and we arrived minutes before the plane was due to leave. It is a very small airport so it didn’t take us long to get through the official bit and not much later we were airborne.

It was a quick visit, but we’d love to come back in the dry season too for some more hiking. There are a few areas we weren’t able to get to in the wet, like the Mount Livingstone Forest and the Numbi Valley. We definitely want to try to find a kipunji in the forest next time. It is a monkey that only very recently has been discovered and is endemic to the region. It would be really cool to see it’s punky hairstyle. 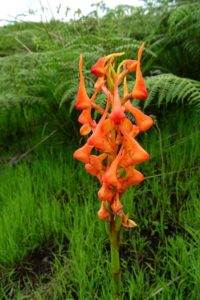 another orchid – disa robusta – monkey cap orchid, we managed to see 6 from the 7 orchids that were flowering when we were there 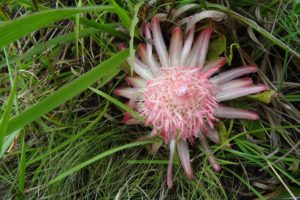 flowers growing straight out of the ground – protea humifusa 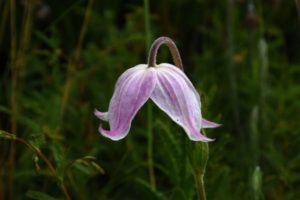 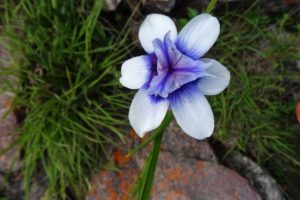 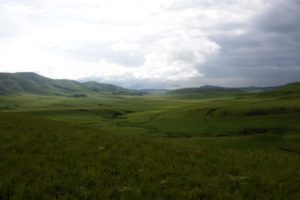 view of one of the valleys in Kitulo NP