A quick camping trip to Saadani for a weekend resulted in a very bad night’s sleep.

Early Saturday morning we went for an early paddle in the bay before a leisurely breakfast and packing for our weekend away. 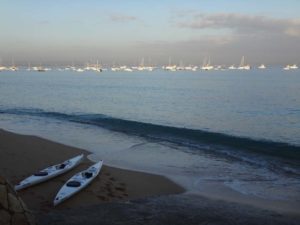 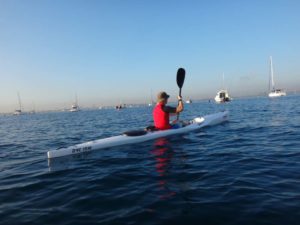 Jon in his new boat

Living 3 stories up means we need to be organised to limit the number of trips downstairs to pack the car. Luckily we have a lift, although it has an annoying tendency to close its doors after 5 seconds. We resort to jamming the doors open and living with the automated lady announcing ‘doors closing’ every few seconds….

Once loaded we started the drive out of town, a bit slower at this time of day due to the increased traffic. The traffic police in Tanzania now own speed guns and it has become their favourite toy. They seem to love removing (or relocating?) the end of 50km/h-zone signs leaving you wondering what the speed limit is. They then position themselves behind a tree, a few meters after the point the sign used to be, and ‘kerching’, the revenue floods in! To avoid this, you just drive slowly all the time! Fortunately Saadani is not far, around 100km, but it still took us 2,5hrs to get to the gate…

Whilst paying at the park’s headquarters, we were offered a boat ride if we could leave straight away. We did exactly this, even though we didn’t have time for lunch. The 3 hour boat trip on the Wami River, which originates in Morogoro, was interesting. Lots of birds and a huge crocodile launching himself off a steep riverbank and belly flopping hard onto the mudflats below. We had a good giggle, but the poor croc probably winded itself. 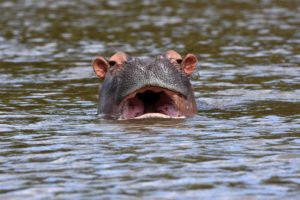 he kept ‘talking’ to us, mouth open, mouth closed, repeat…

We are still adding new birds to our ever growing list, including the mangrove kingfisher on this occasion, and we enjoyed the scenery and the many flamingos gathered at the mouth of the river. Our usual campsite was overflowing so we made the decision to camp somewhere a bit more private. Last time in Saadani we were lucky enough to spot a civet (our first ever) on the beach, we were hoping to see another one… 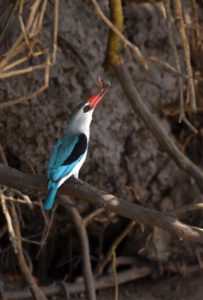 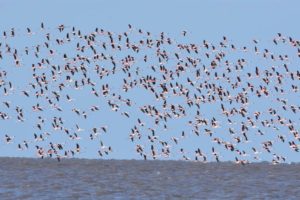 lots of flamingos taking off 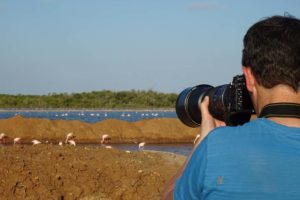 beautiful white-throated bee-eaters, dozens congregated in this bush for the night

We arrived as it was getting dark and quickly prepared dinner. We were quite tired and wanted to get up early for some morning game spotting, so went to bed early after a short walk around camp to check for anything exciting. Nothing.

It was hot in Saadani, especially at this time of year and even though the short rain season had started we decided to risk it and not use the flysheet, instead we kept it handy inside the tent. We fell asleep gazing at the stars and listening to the sounds of the bush. There is nothing better than to fall asleep wondering what animal makes that noise, or that one… 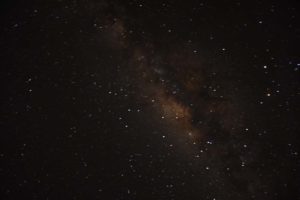 Jude woke up after a few hours as she needed the toilet, a large cup of tea just before bed was probably not the best idea. Scanning our campground just revealed some spider eyes, nothing exciting. She quickly fell asleep again until she was woken up by some rather noisy bushbabies who had decided to have a conversation right next to our tent. Wide awake and listening to the screams, she decided to go for another toilet stop and check out the trees with the ay-ups (mountain biking torches, with the same power as a car headlamp), hoping to get a glimpse of those noisy buggers.

She spotted two sets of eyes in different trees, but they seemed to be on the move constantly and too far away to make out what body was attached to the eyes. So before squatting down for business she checked the other side of our campsite and spotted a crested porcupine, just about 20m away. She quickly unzipped the tent to wake up Jon, who just pulled up his leg, probably annoyed by the rude wake-up in the middle of the night. But once he realised there was a porcupine right outside the tent he quickly came out to join the party. We watched him (or her, how do you tell?) for a while, very aware that when annoyed they can attack their ‘predator’ by reversing and running their quills into the unlucky sod so we kept our distance. He disappeared into the bush for a second and came back out again and walked almost straight towards us. 10 minutes later something spooked him and he ran off, leaving us behind, very tired and with a few extra mozzie bites, but oh so happy. 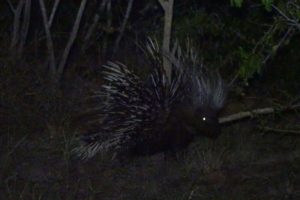 our night visitor – a crested porcupine! The first time we had a good look at one, the previous 2 times we saw one were glimpses (once in Kenya and once in Zambia)

Fast-forward another few hours and we were woken up again. This time by huge raindrops landing on us… we scrambled outside to try to keep things as dry as possible by throwing the flysheet over the tent as quickly as we could. Wide awake again, we went back to bed, trying to get some more zzz’s before sunrise.

We woke up before our alarm clock went off and quickly threw everything into the car and drove off, we love the early morning hours when you’re out in nature (even though getting up is not always easy, especial not after a night like this). 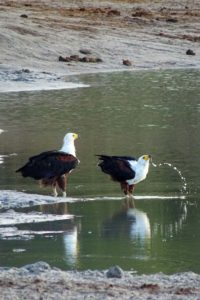 2 African fish eagles coming down for their morning drink, the larger is the female. 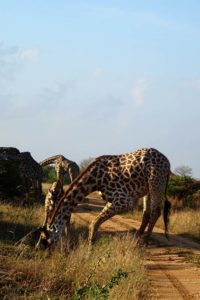 another animal having its morning drink, this time a giraffe and her baby both drinking from a small puddle

After a few hours we found a scenic and shady spot for breakfast and a quick snooze before heading home via the old colonial port of Bagamoyo. Founded in the 12th century, it became the main terminus for the slave trading caravans in the 18th century, with up to 50,000 slaves being shipped to Zanzibar annually and from there on to the Middle East and Indian sub-continent. The trade was stopped in 1873 when the Sultan of Zanzibar relented to British pressure and abolished the slave trade altogether. Subsequently, Bagamoyo became the first headquarters of German East Africa. It has had quite an interesting history, but today is a little run down. Despite this, its history is clear to see and it is a pleasant place for a stroll and lunch, before hitting the road back to Dar. Till next weekend… 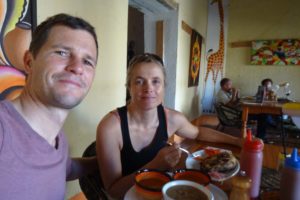 Jon and Jude having a fishy lunch in Bagamoyo