5 weddings and no funeral

We’re not sure why, but 2015 seemed to be the year of weddings and we received 5 wedding invitations from good friends from all over the world. Fortunately, the two lucky Australia couples had scheduled their weddings close enough that we could be present at both (we’ll be talking about their weddings soon…). And as it’s a relatively short hop to Europe from Kenya, we were also able to attend all three of the ‘big days’ there.

The wedding season started with Nick & Anna’s wedding in Sweden. Being so close meant we could leave on Thursday night and be in Stockholm the following morning. We rented a little car to be mobile and before heading to the wedding location we had to do some urgent shopping. Nairobi is fantastic and has many shops and pretty much sells anything you need, but for some things we still prefer to head out of Africa.

When we arrived at the shopping mall we sure felt like real losers. We could enter the mall, but none of the shops were open yet! We were the sad people milling around in empty shopping malls with nothing better to do in their lives…

The weekend could only improve from that sad start and it did. Being an Australian / Swedish couple meant Nick & Anna had organised a perfect combination for the Friday afternoon: a sauna with bbq by the Baltic Sea. A sensational location, with water the perfect temperature for a dip after a stint in the sauna (perfect being butt-freezing!). The rest of the night was spent gossiping with the groom’s parents, about both the bride and the groom, as we admired all the homemade Pavlova’s we were going to eat the next day as the wedding cake, and Nick wrote his speech! 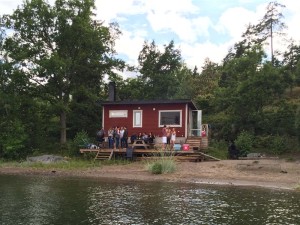 The next day we drove out to Domarudden where we found a fantastic run through the forest thanks to Anna’s instructions. It even had a lovely café for breakfast afterwards. We nearly missed the wedding ceremony because of that, but as brides are always a few minutes late we just made it. 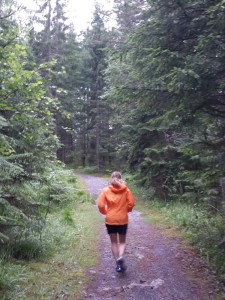 a quick run in the forest of Domarudden before the wedding

A beautiful bilingual ceremony (Nick reading his vows in Swedish, Anna reading hers in English – great solution to a tricky issue) was followed by delicious Swedish food, some fun and games and of course a couple of songs in Swedish we sang along with. No idea what we were singing, but it was fun. Luckily the bride recognised her new husband’s feet with a blindfold on (smell?) and it was interesting to see there were quite a few people standing up when the new couple had to guess who had seen Nick naked… 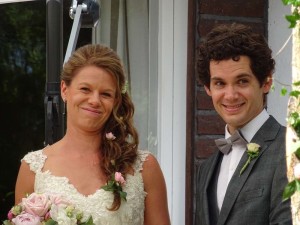 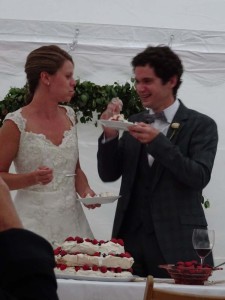 eating the home made pavlova wedding cake (all made by Nick’s mum!)

The rest of the night is a bit of a blur thanks to copious amounts of wine and a whole tasting table full of whisky, perfect for a cool summer evening under the stars. The next day we were back at the house again for a delicious brunch and we stayed until the very end before driving straight to the airport to fly back to Nairobi. 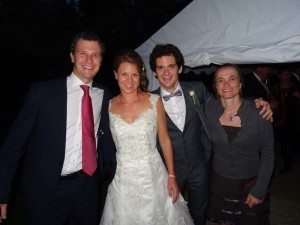 the new husband and wife

A few weeks later we repeated the same process. Again we were off to a Scandinavian country for a wedding, Denmark this time. Jon arrived first and was waiting for Jude with train tickets in hand (don’t ask why we were on different planes to get there…). We hopped on the train to get to Odense where the happy couple live. They weren’t there when we arrived, so we dumped our bags and grabbed their bikes. We explored Odense, the birthplace of Hans Christian Andersen of fairytale fame, grabbed some drinks in the local park and just enjoyed being free to walk and ride where we wanted! 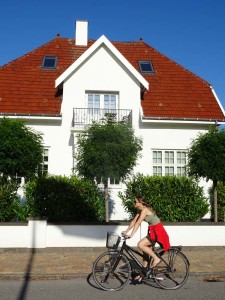 In the evening we went out with Bjørn and Dorthe for a typical Danish meal in a beautiful old restaurant. Lots of fish and of course herring. Delicious! It was great to catch up with them before the big day, we felt very privileged :-).

The next morning we woke up to rain. Not great. But luckily a little later it started clearing up. Whilst we went out to explore Odense a bit more, Bjørn and Dorthe already went to the watermill to prepare the final details. We were picked up by Carina, a friend of Bjørn who drove us there a little later.

We pitched our tent and got ready for the ‘wedding games’, which included an archery contest, tree climbing and zip-lining over the duck-pond! We also all went on a sort of treasure hunt, completing tasks along the way before sitting down for a fantastic buffet. They had roasted a massive 85kg free-range pig (because they are free range they don’t come in small sizes!), I don’t think we ate half of it!! 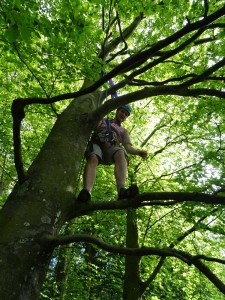 Jon up a tree…

There were some fun local traditions: when the wife leaves the table, all girls line up to give the groom a cheeky kiss and when the guests clink their glasses with their knives and forks the couple have to get up on their chairs and kiss. And of course songs feature heavily. Again we were singing along without having any clue of the meaning… 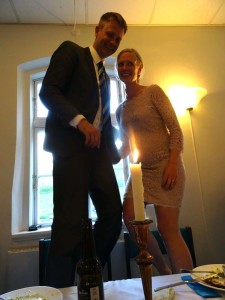 The ‘band’ of the night was rather unusual, but absolutely brilliant and so funny! They are called Heart Beat and have an amazing performance. Have a look at this video of Heart Beat to see what they do. 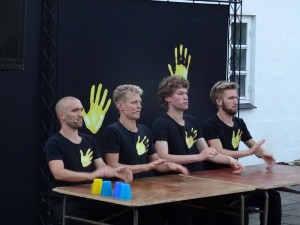 Heart Beat – an amazing performance from these 4 guys!

Later that evening it was our job to light the fire where we whiled away the rest of the night . It was great staring into the flames, listening to stories, roasting marsh-mallows over the fire and singing more songs, mostly in English for our benefit which was wonderful. 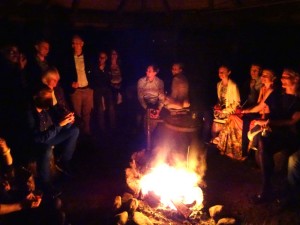 stories around the campfire until the early morning…

Another brunch followed, this time with lots of typical Danish things, before we had to leave. We were driving home with Bjørn’s sister who very kindly allowed us to stay in their house in Copenhagen. Jon had never been to Copenhagen (or Denmark – somebody was pleased to add another country to his list) so we spent the next day exploring the sights on the city bikes of Copenhagen. Luckily Europe put another perfect sunny day on for us and we had a great day riding and walking around town with the luxurious electric city bikes complete with tablets for navigation! 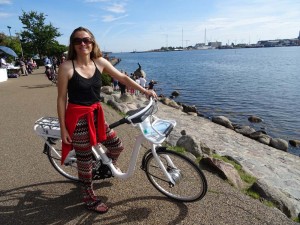 exploring Copenhagen with the city bikes with tablets 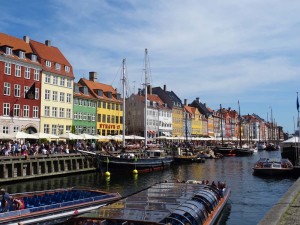 That night we got on the same flight, but at Amsterdam Jon continued to Nairobi and Jude was picked up by her parents and Niels & Jens. Jude spent the next 10 days in Holland catching up with family and friends, getting in some quality retail therapy, getting a hair cut and even visiting the dentist. Jon had to get back to work for 4 days before flying back to the UK to also catch up with his family and of course for the next wedding…

On Friday Jude was dropped off at Rotterdam airport for her flight to London. We were going to meet in our hotel in Richmond for Richard & Holly’s wedding. But before the wedding day, we managed to squeeze in a catch up with some great friends we hadn’t seen in a long time. Justine, Suze, Roger, Dymph & Graham and Jan all made it out to a lovely little pub for dinner and some drinks. It was a lovely catch-up accompanied by good pub-grub and ‘proper’ beer, hopefully it won’t take so long until we see each other again! We really appreciate the effort you all made to get there especially for us. Thanks guys & girls! 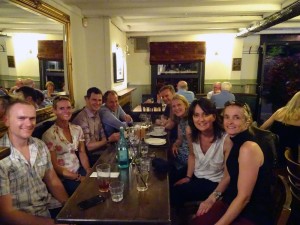 The next morning we had to get up on time as the groom wanted to do a final bachelor’s run. It just so happened our hotel was right next to Richmond Park where they hold a park run every Saturday morning. It was a perfect sunny morning, hot for UK standards, and we really enjoyed going for a jog together. It meant we had half an hour of catch up time before the rush of the day would sweep Richard away for his duties as a groom. 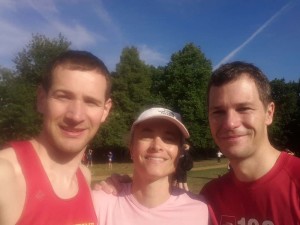 Jon also had duties that day being one of the ushers, but struggled a bit as he had lost his voice… At 12.30 we had to have everybody on the red double-decker bus from the hotel to take us to the church. Jon was contemplating making a sign that said ‘get on the bus, it is leaving soon!’ but delegated much of his job to Neil and Jude instead. There was enough time to sneak in a quick pint at the local pub, conveniently located next to the church, before we all took place on the wooden benches in the pretty church. 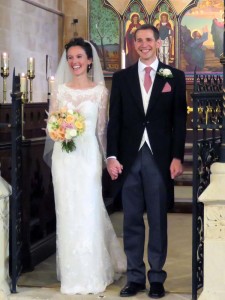 just been declared husband and wife!!

The same bus then took us to Chiswick House where we played games in the gardens and enjoyed some drinks in the welcome shade as the bridal party went off to take their photos. 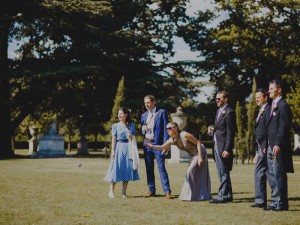 playing games on the lawns of Chiswick House

The dinner was as sensational as could be expected, Richard and Holly take their food very seriously. Even the tables were named after restaurants with a special meaning to them – most of which have a Michelin star, or two. After dinner there was the usual cake cutting ceremony, the first dance, and then we were all on the dance floor trying our feet at cèilidh (pronounced kay-lee) dancing where a caller explains the steps and moves to the couples on the dance floor and then they actually (try to) dance them to the music. Great fun. 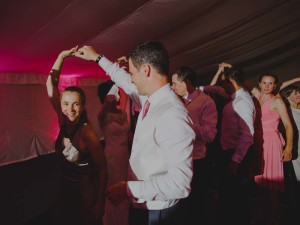 trying our hands and feet at some cèilidh dancing 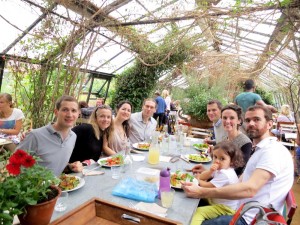 lovely brunch on the river the next day with Richard, Vicky, Jonny, Holly, Miles and Julia

Sadly, there was no bouquet throwing at any of the weddings on the European leg, so for those of you waiting for us to tie the knot you will have to wait a little longer as Jude hasn’t managed to catch anything yet.