After an extensive search of Lara at the Turkish border, our first stop was beautiful Lake Van, famous for the Armenian Church of the Holy Cross from 900AD on a small island in the south of the lake. After a quick lunch somewhere on the shores of Lake Van, we parked Lara on a small peninsula, only about 4 kilometers from the island. We got the inflatable kayak out so we could paddle to the island and check out the church. It was a perfect, sunny and wind still day for it and after a relaxed paddle we arrived at the island. David and Arhan, the 2 security guards, were just having a cuppa and invited us to join them. First impressions of Turkey were good! 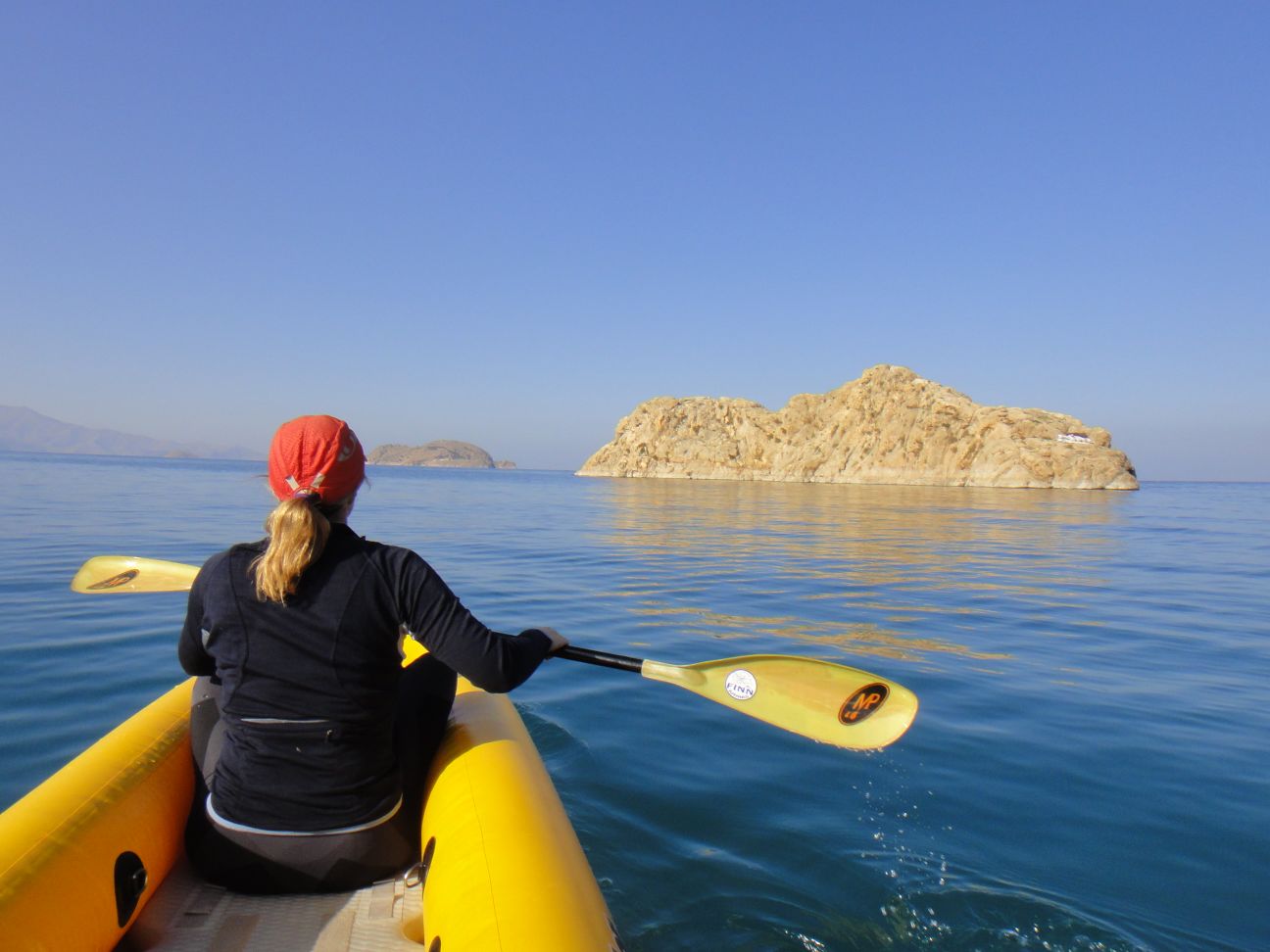 paddling on Lake Van, our destination is the church on the island on the left 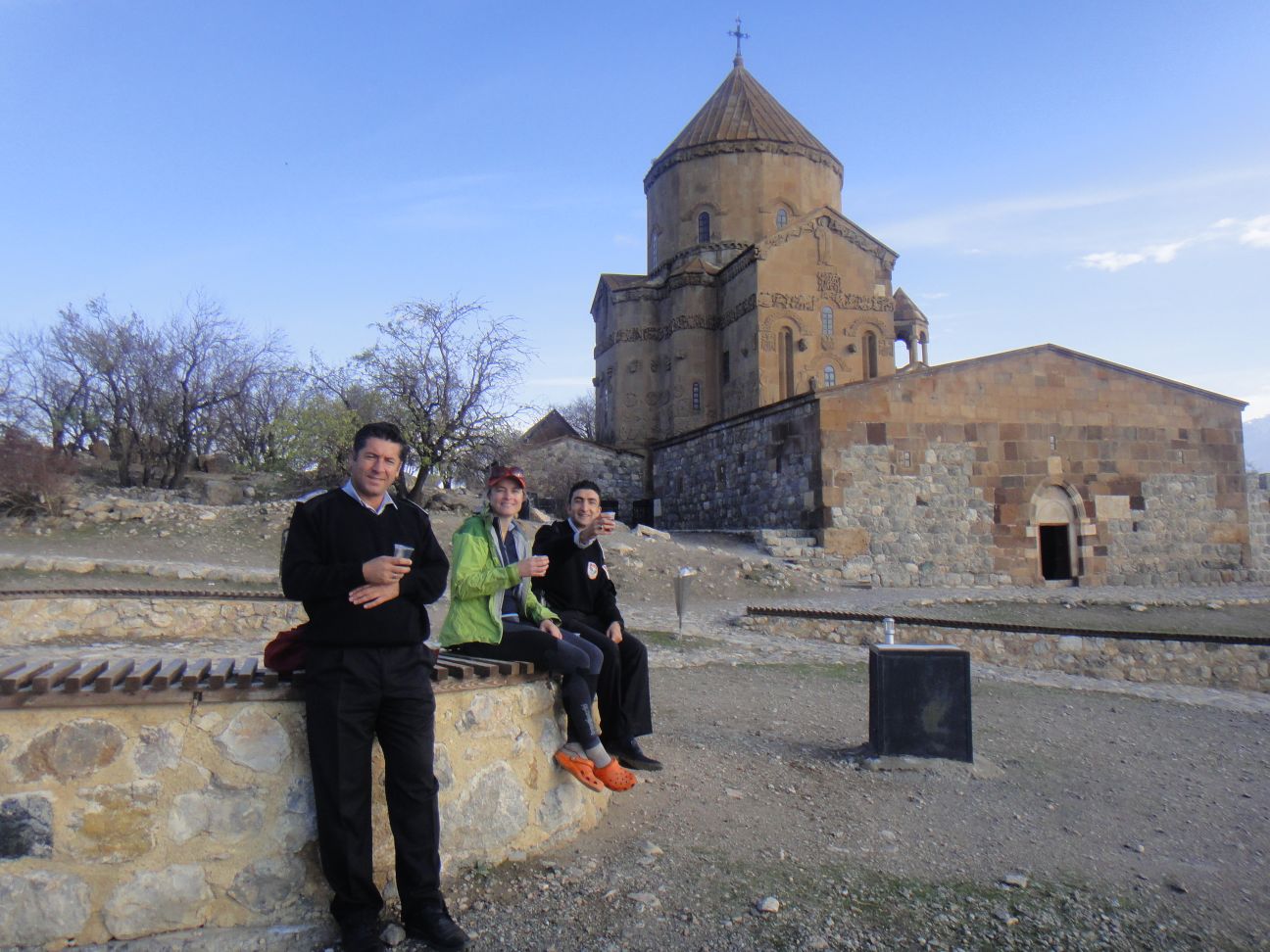 After our cuppa they became our personal guides and showed us around the grounds and the church. The Armenian architecture is unique, and the church was beautifully decorated with frescoes on the inside and relief carvings on the outside depicting well known scenes from the bible. After our impromptu tour, we shared some of our biscuits and watched the rabbits play. When the next tour group arrived they left us to sell them tickets and we walked around the rest of the island. It wasn’t big so we were soon done and we headed back to the kayak. We needed to start heading back as it would be getting dark soon. David joined us, he wanted to have a look at the kayak, and we invited him on board for a short paddle.

That night we camped on our little peninsula, occasionally getting some visitors. Some played loud trance music and talked around a campfire, others brought a rifle and used some left-behind beer bottles for target practice, and couples went for a romantic stroll around the little peninsula. It felt like we were on the local boulevard, and we had a great night watching all this parading. 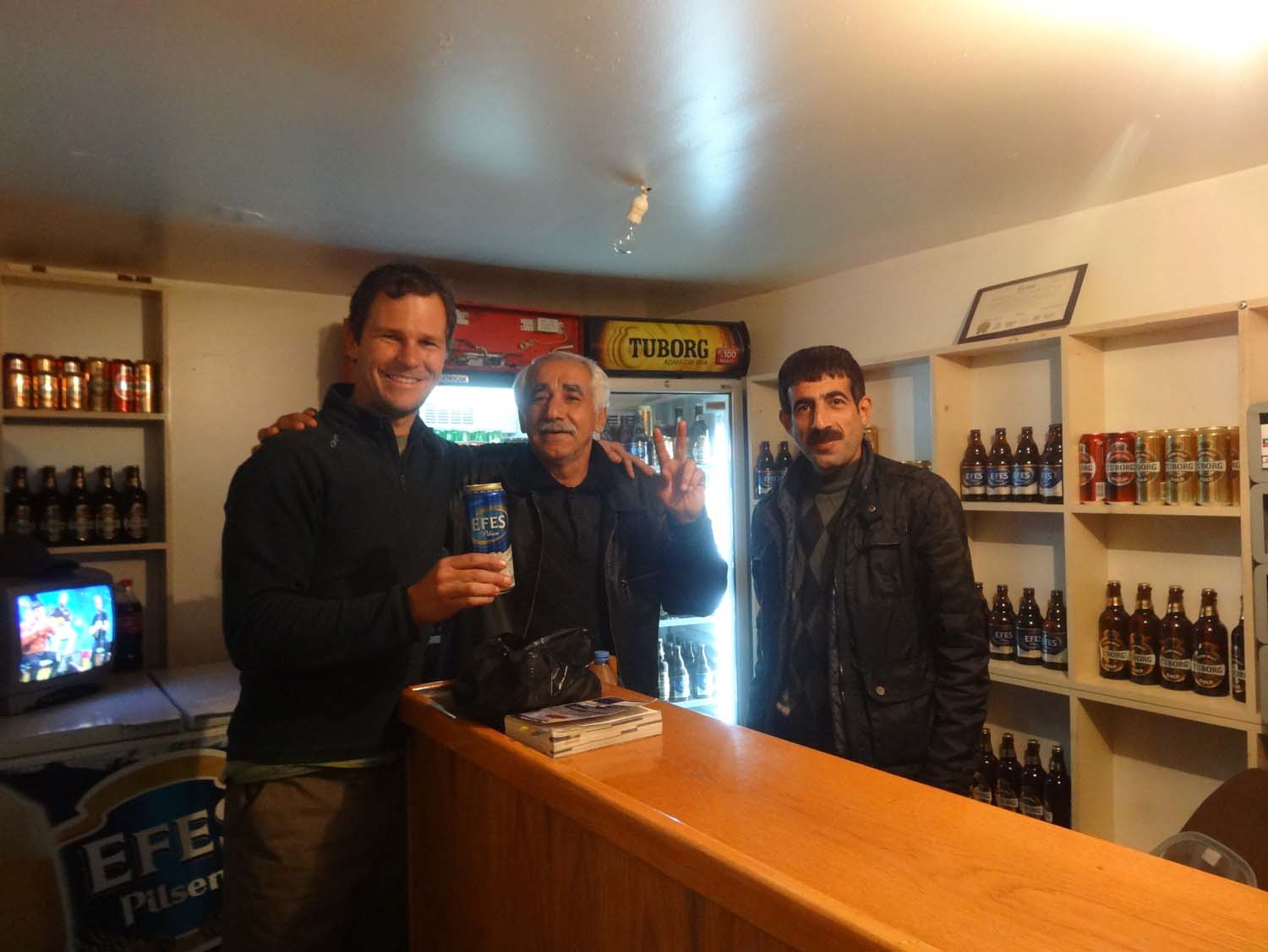 Jon buys his first beer after Iran. It tasted good!

From Lake Van we drove to Nemrut Dagi. This is the burial site of the megalomaniacal (grootheidswaanzinnige) King Antiochus from 100BC. Besides what is assumed to be his burial chamber at the top of the biggest mountain in the region, he built two rows of gigantic statues depicting himself and several Greek gods, such as Zeus. Clearly he had a pretty high opinion of himself. In between the two rows of statues he placed an artificial mountain made of pebbles, 50m high. Interesting. 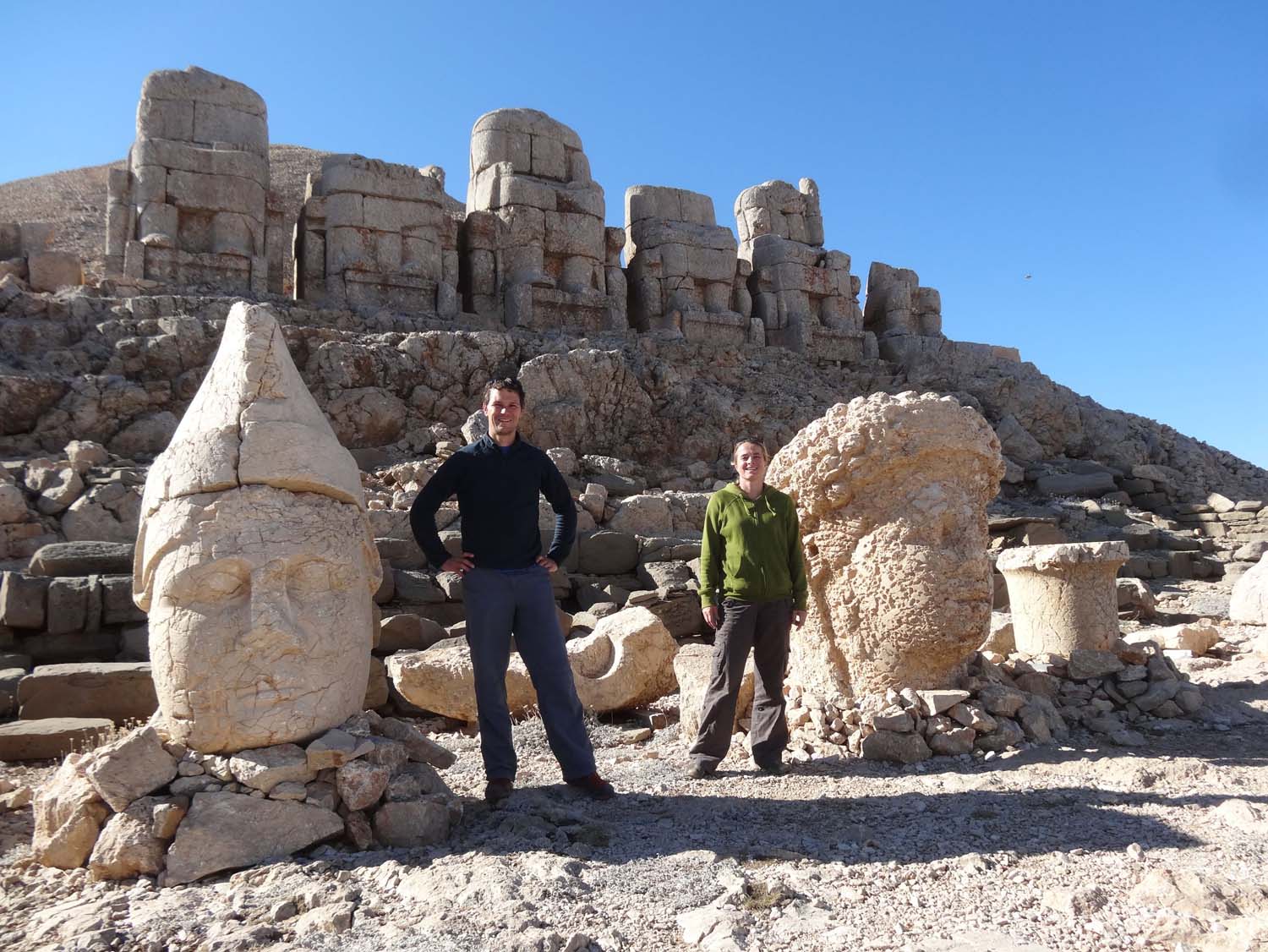 the statues at Nemrut Dagi, which had fallen from their torsos behind us 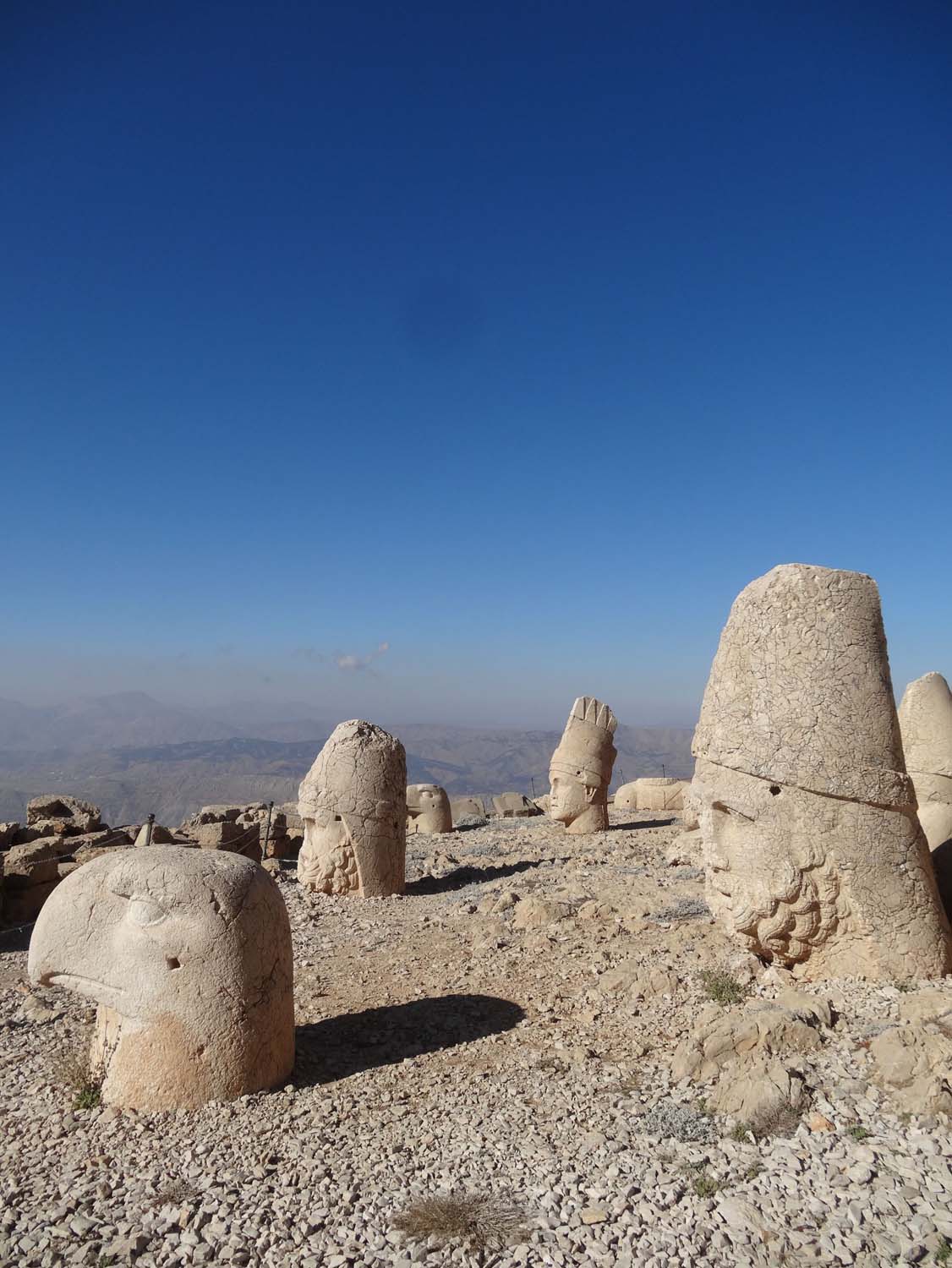 the famous heads of Nemrut Dagi

We were even more impressed by Catalhoyuk. Like Sarazm in Tajikistan, this is a Neolithic town, but this one is even older, dating back to 7500 BC! Here in Turkey they have set up an informative museum next to the archeological pits, explaining how it was discovered and how the community existed, which numbered up to 8000 people. It is simply mind-boggling and we eagerly read all the signs before visiting the actual archeological sites where we saw the current state of the diggings. 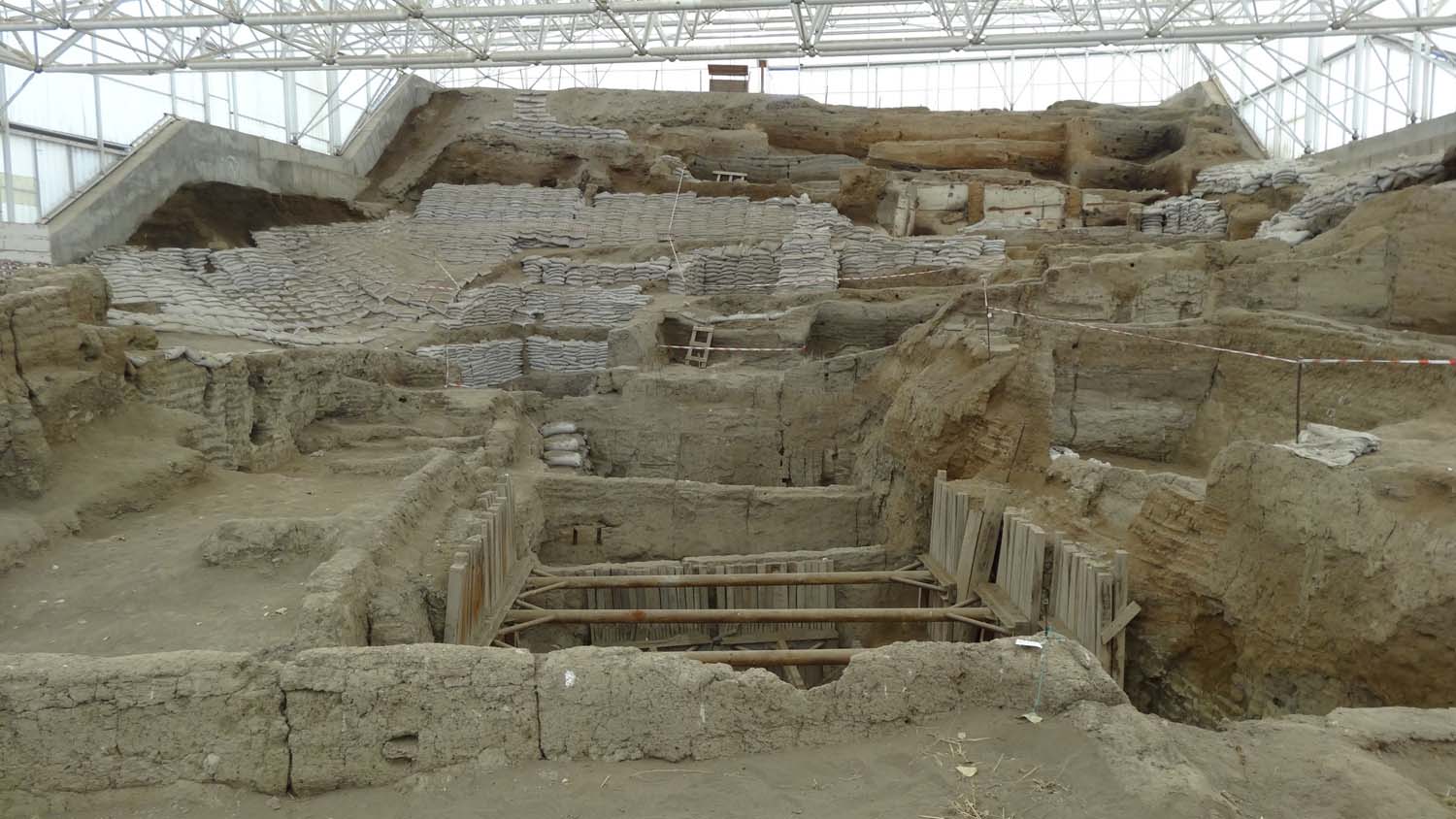 Archeologists are still working on this site every summer and they have uncovered many houses, tools, ovens, graves and even paintings on the walls of houses. The houses only had entrances on the roofs, similar to the Neolithic site of Skara Brae on the Orkney Islands which is ‘only’ 5000 years old. Maybe this was a good way of keeping livestock and perhaps the local wildlife out in those days? 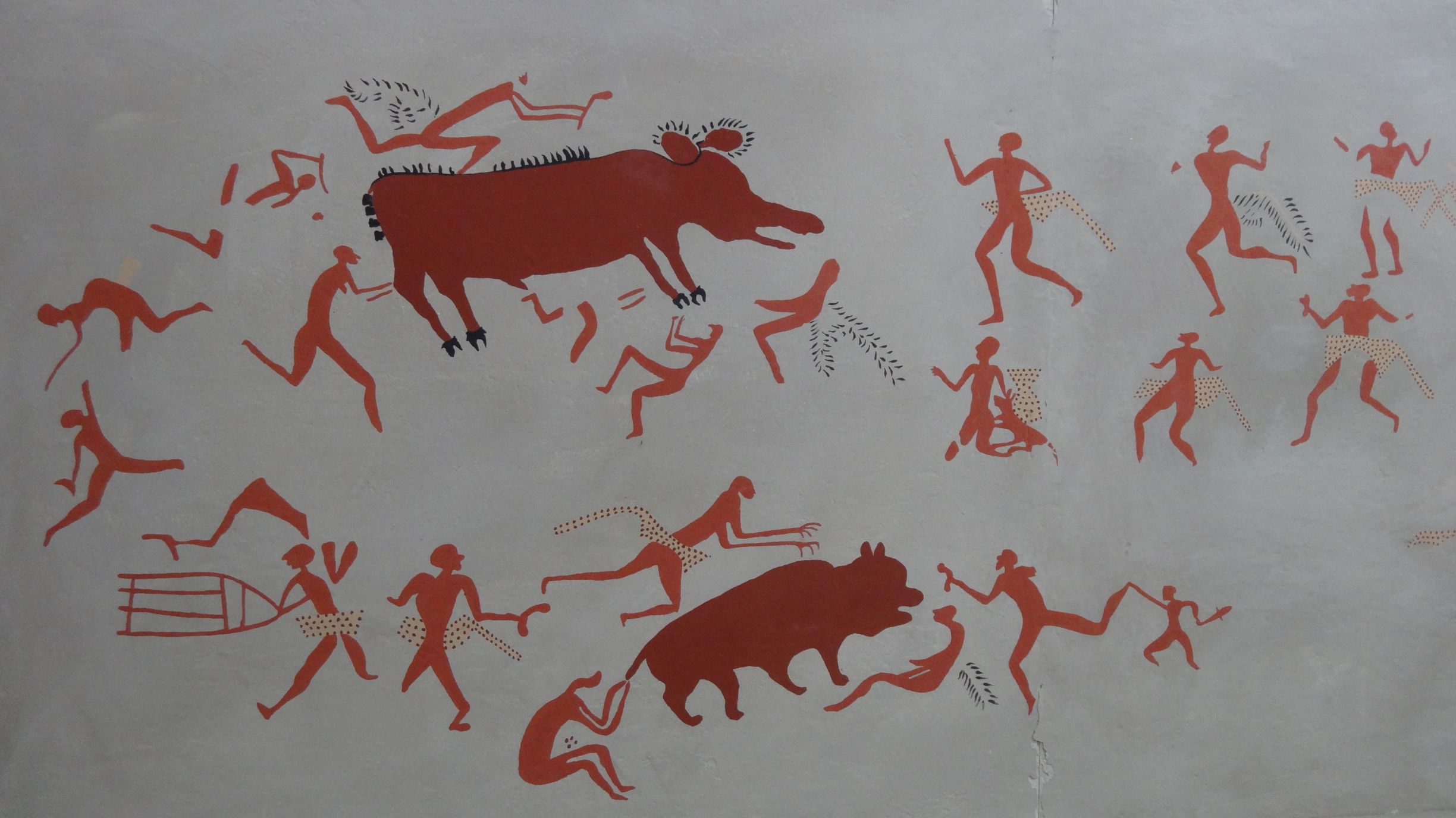 one of many wall paintings discovered in Catalhoyuk

When we arrived in Cappadocia it was already getting dark and we were lucky to find a perfect little campsite very close to Goreme, in the middle of some of the fairy chimneys. We even had our own private little old cave house where we could cook and enjoy a glass of wine. From our tent we could see a few balloons rise into the sky at sunrise the next morning, before we headed to the Goreme open air museum. 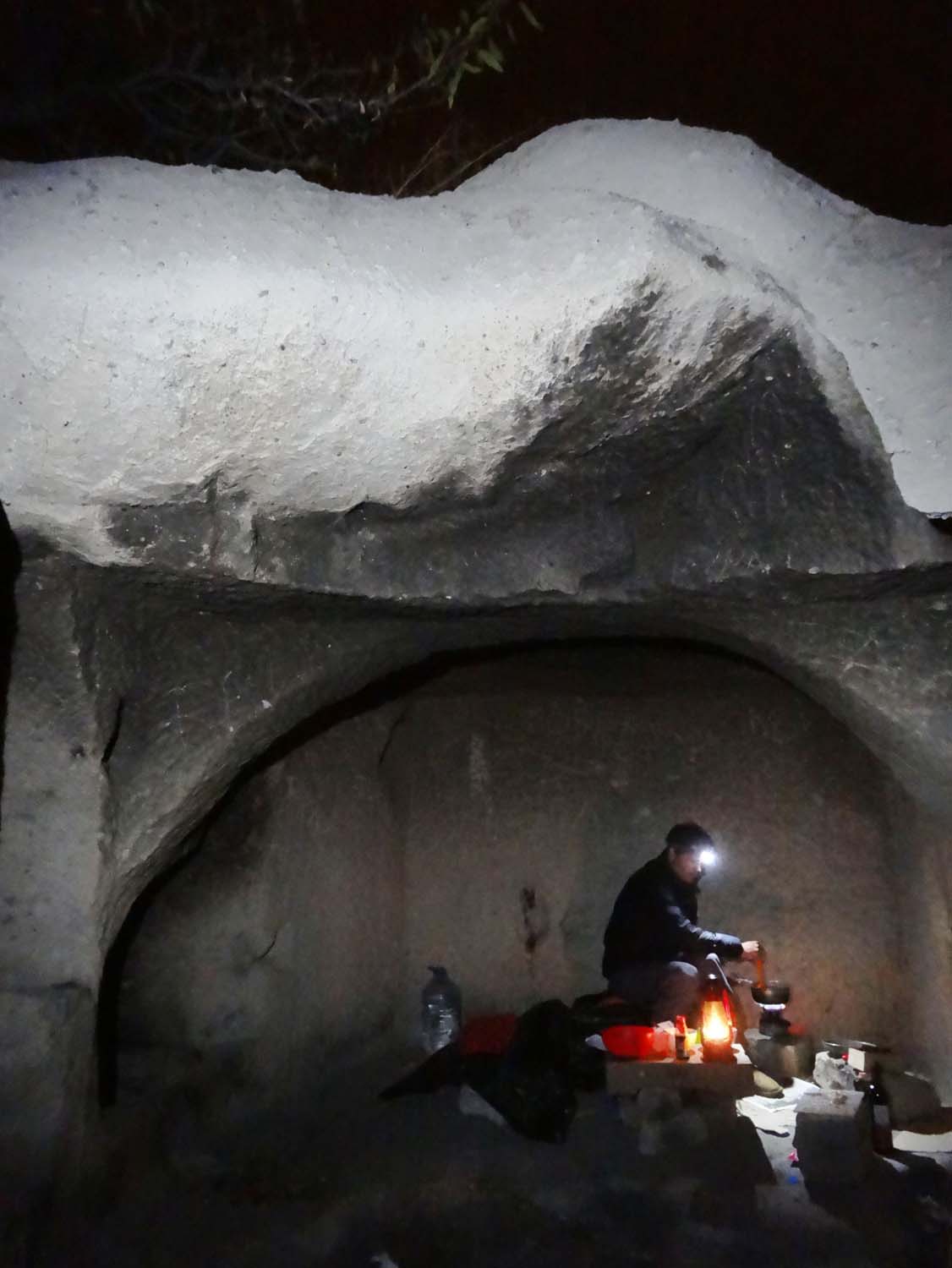 our own cave house next to our campsite in Cappadocia

We had luckily arrived early. By the time we were leaving a number of tour buses had descended on the open air museum and it started to get busy. As the majority of the Byzantine cave churches and refectories (dining halls for monks) which date from the 11th century are tiny, it’s best seen without crowds. Some of the paintings were very detailed, others were almost child-like in their simplicity. 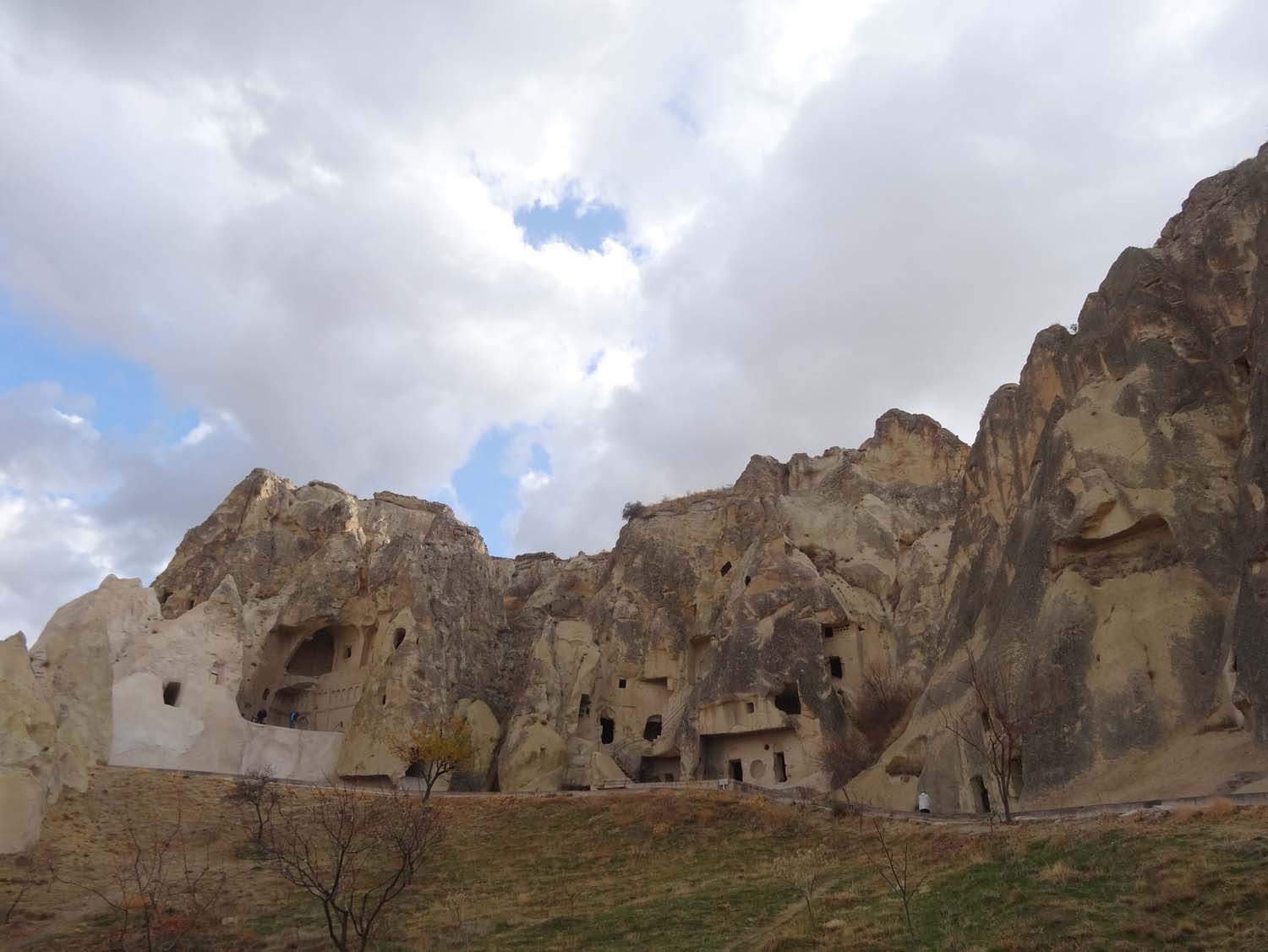 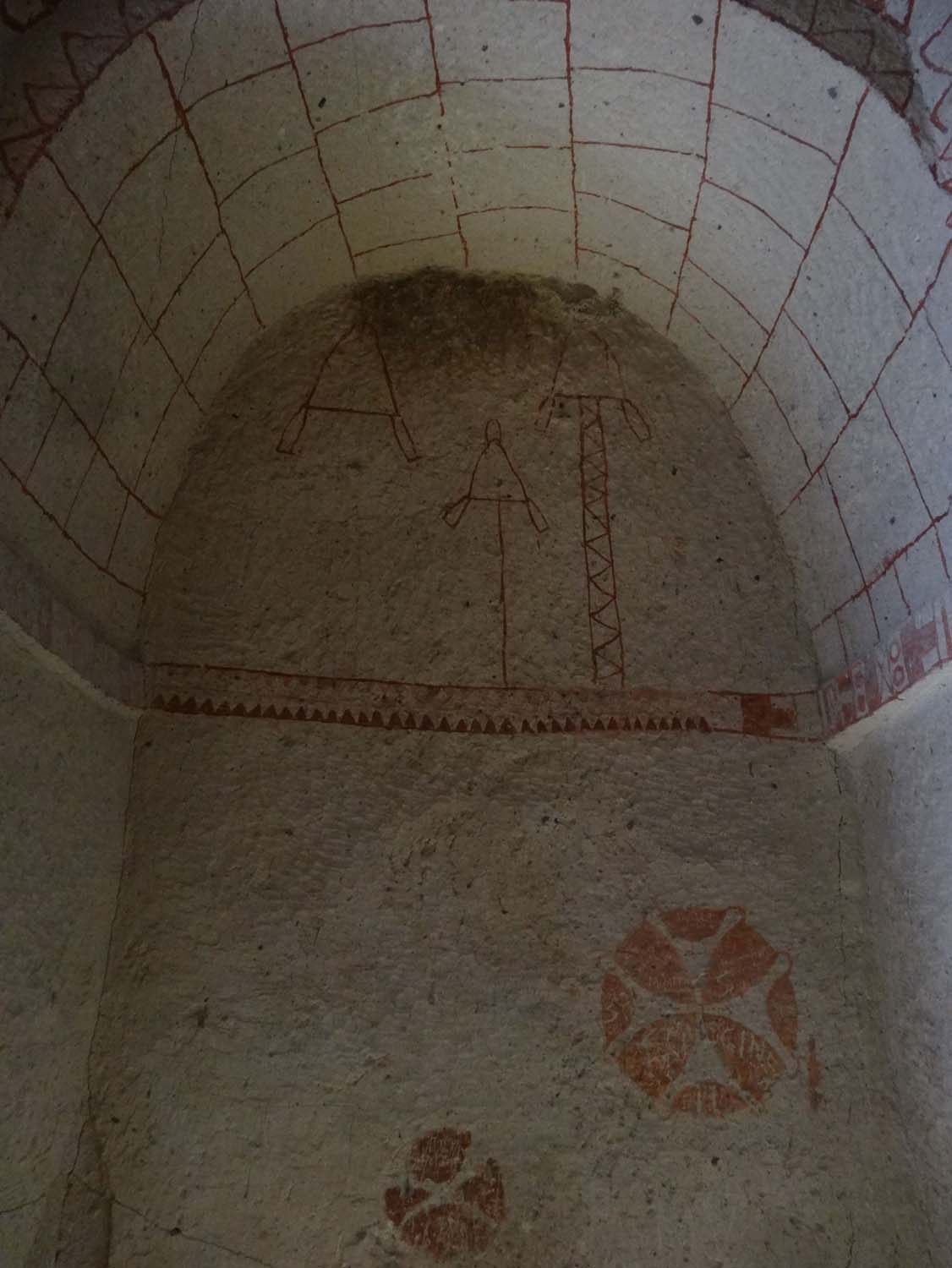 child-like paintings in one of the churches in Goreme

As Cappadocia is famous for its eroded chimney structures everywhere, we drove Lara around to visit some of the valleys. We walked around the fairy chimneys in Red Valley and Valley of the Fairy Chimneys. These are some of the most stunning formations in Cappadocia and we loved wandering amongst these giant pillars. 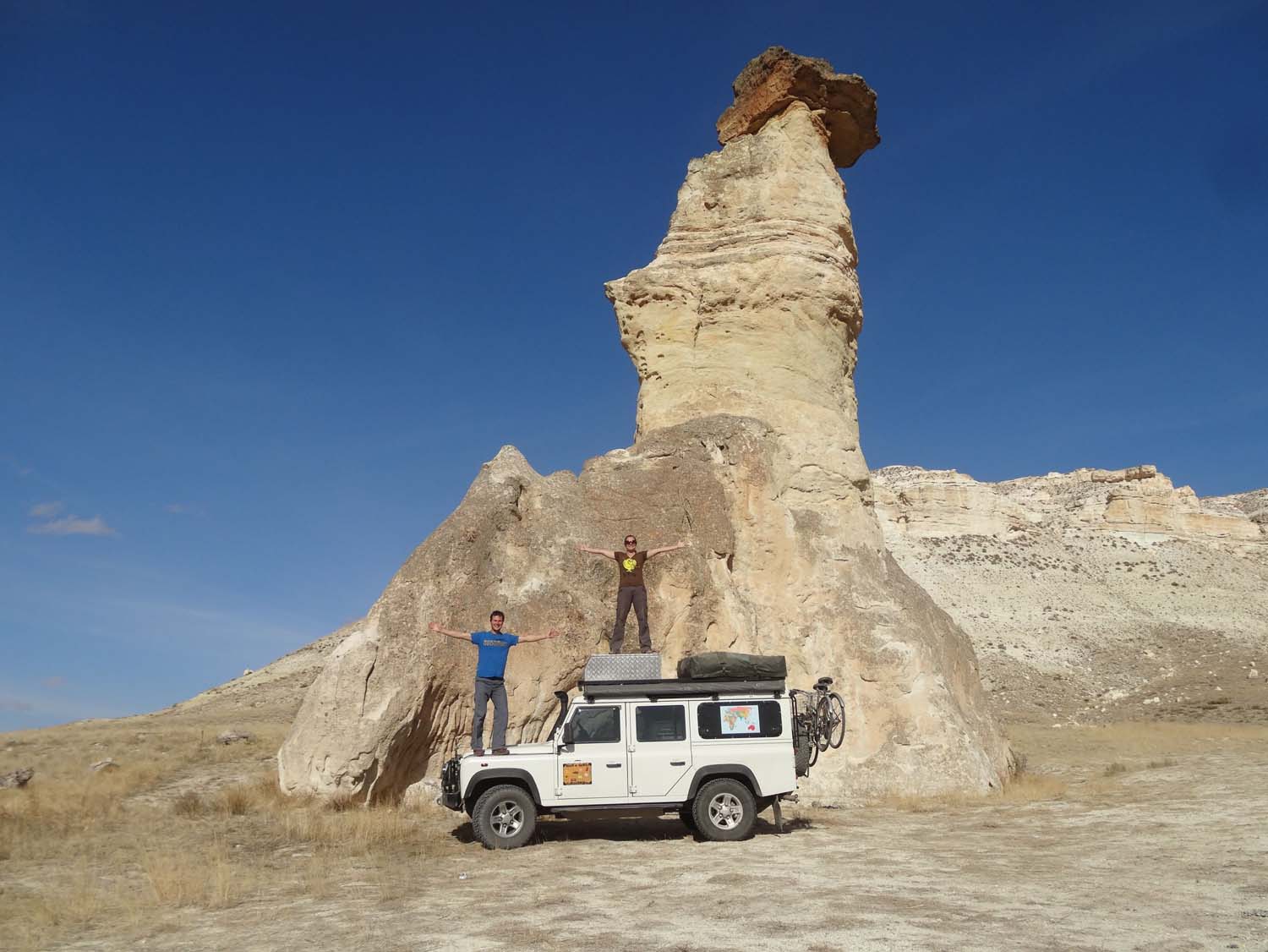 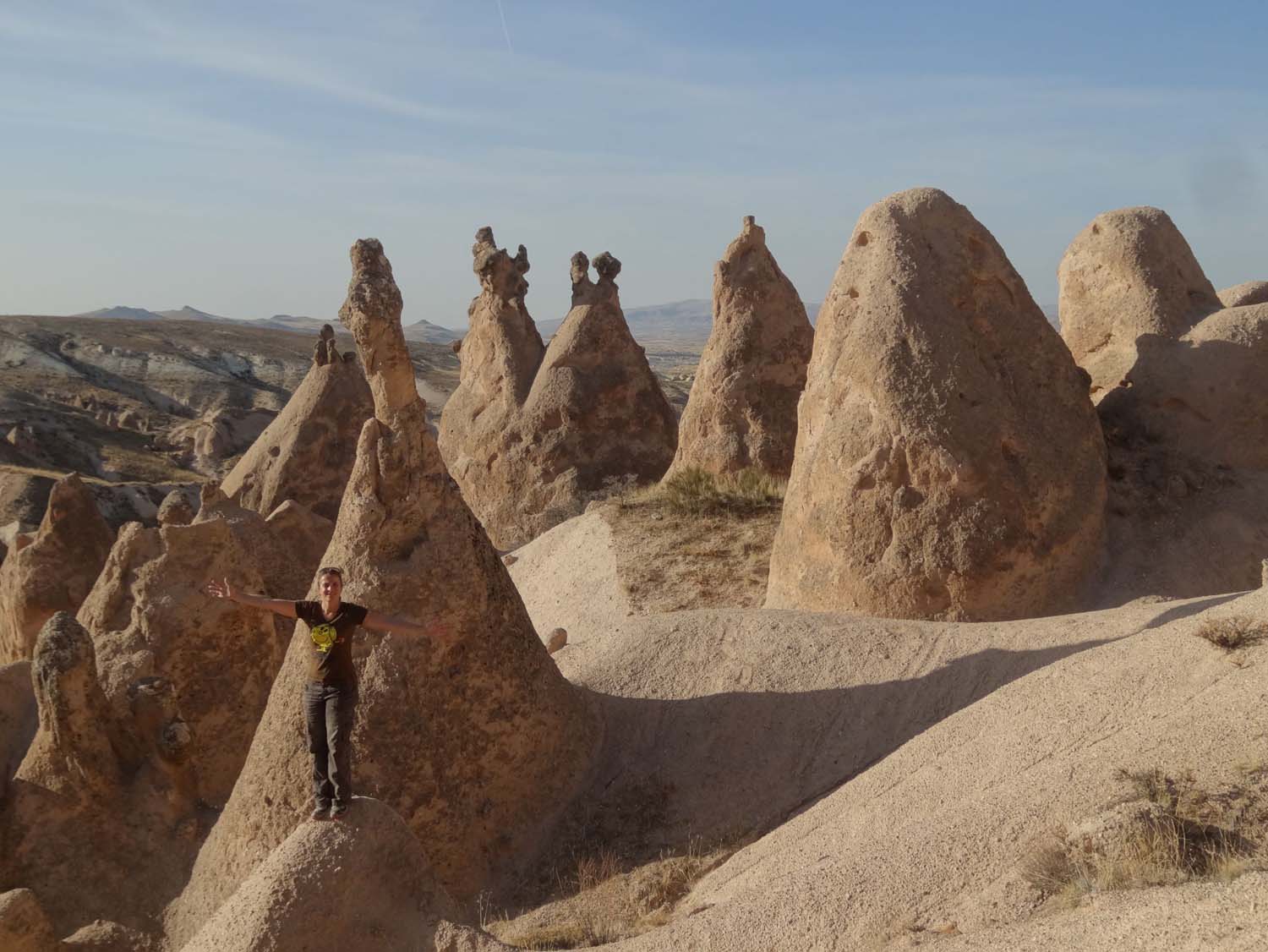 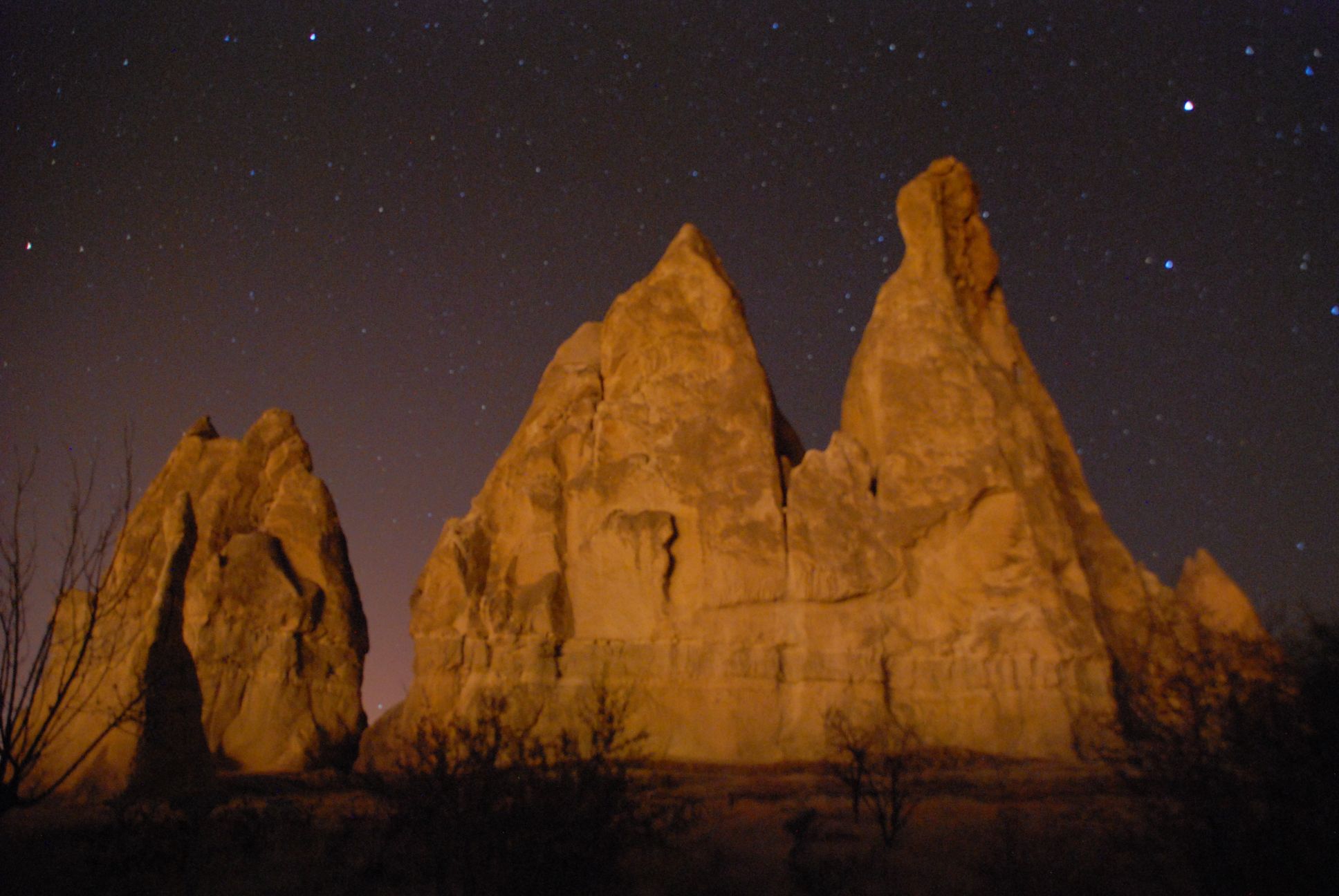 view from our campsite by moonlight

Cappadocia is not only littered with these chimney like formations, it also has a fair few underground cities. We descended into the biggest of them all: Derinkuyu. These places are truly amazing. Similar to the one we saw in Iran at Nushabad, it is built over many levels and was once connected with other underground cities in the area with tunnels up to 8km long. Imagine all the work needed to hack out all these tunnels, wind shafts, rooms and even churches. It was also defendable against enemies with round stone doors in strategic positions to close off whole sections. Up to 20.000 people and their livestock once lived here! 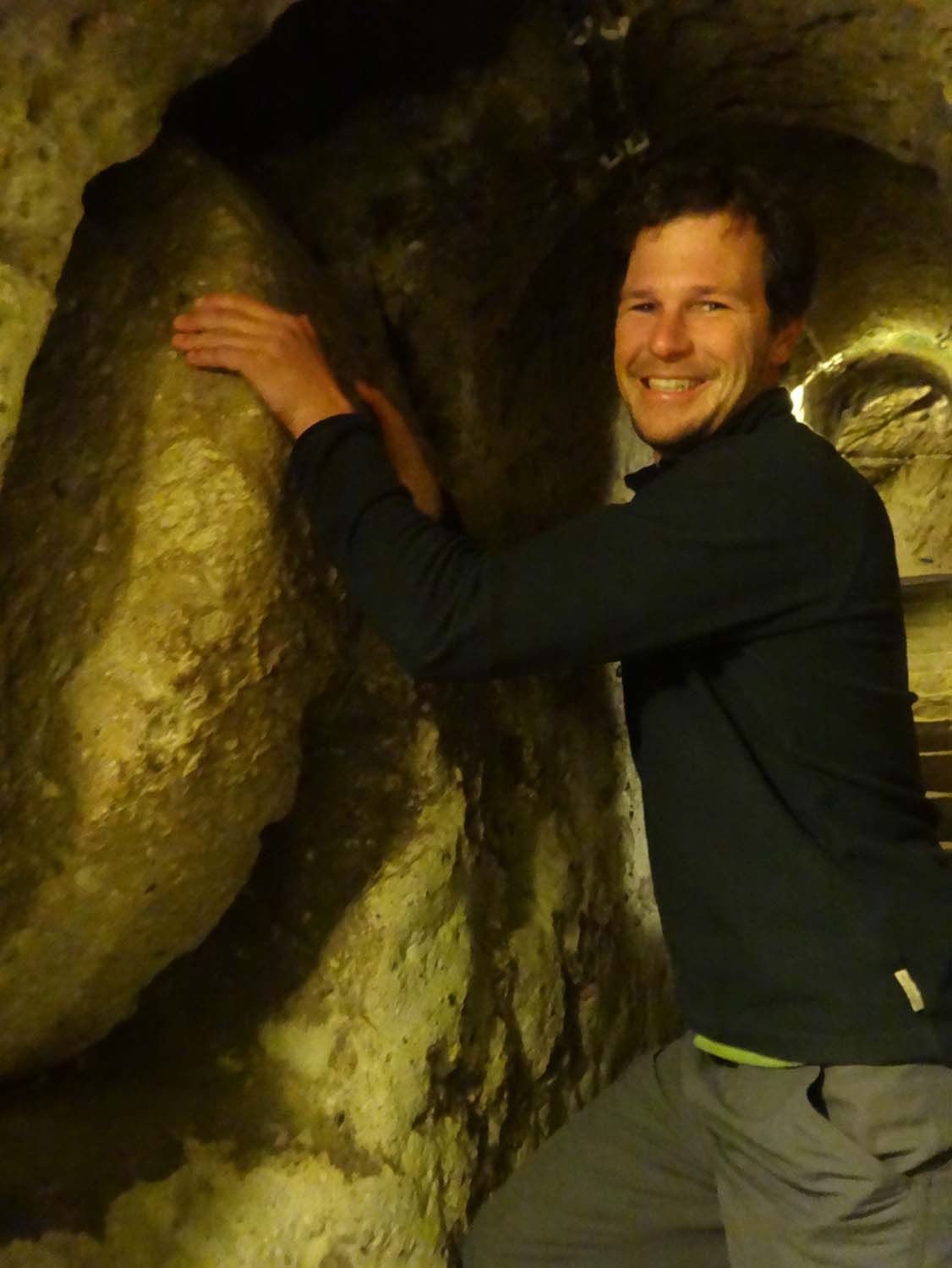 Jon closing the round door in Derinkuyu, an underground city in Cappadocia

Although our birthdays were a while ago, we celebrated them again in Turkey as we both wanted to go on our first ever hot air balloon flight. And, as Cappadocia is famous for being the most spectacular place in the world to do a hot air balloon flight and the weather was still fantastic, we decided to go for it. 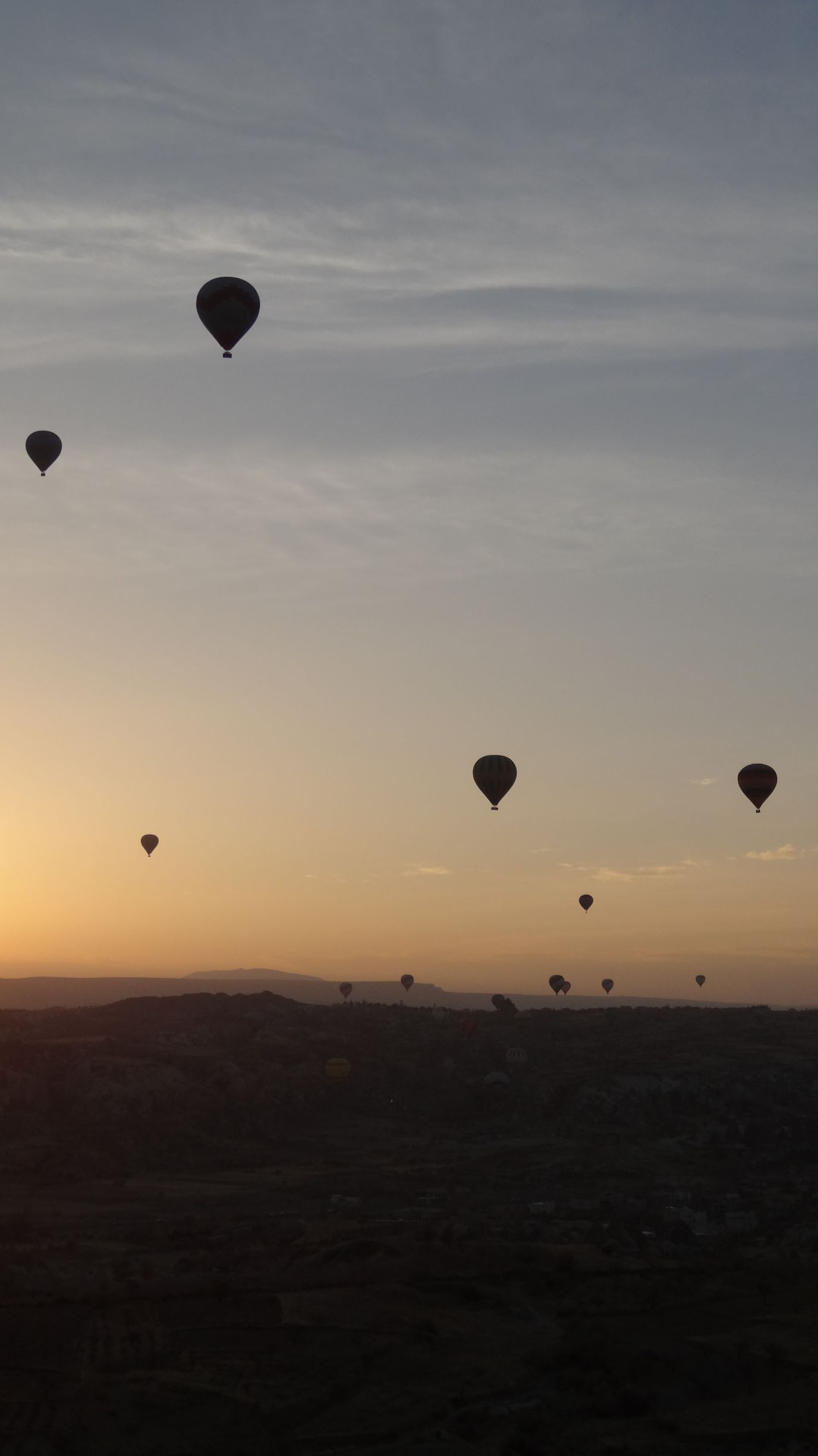 We booked our flight and went to bed early, with our fingers and toes crossed, hoping for good weather again the next morning. At 4.40AM the alarm went off as we had to be at the restaurant for breakfast at 5.15AM. The weather was perfect, we met up with our female pilot Tanya and an hour later we were standing next to our balloon with a huge basket attached to it. They were just finishing inflating the balloon and when the basket was upright, we jumped in and helped our fellow geriatric passengers climb in too. Not much later we were in the air! 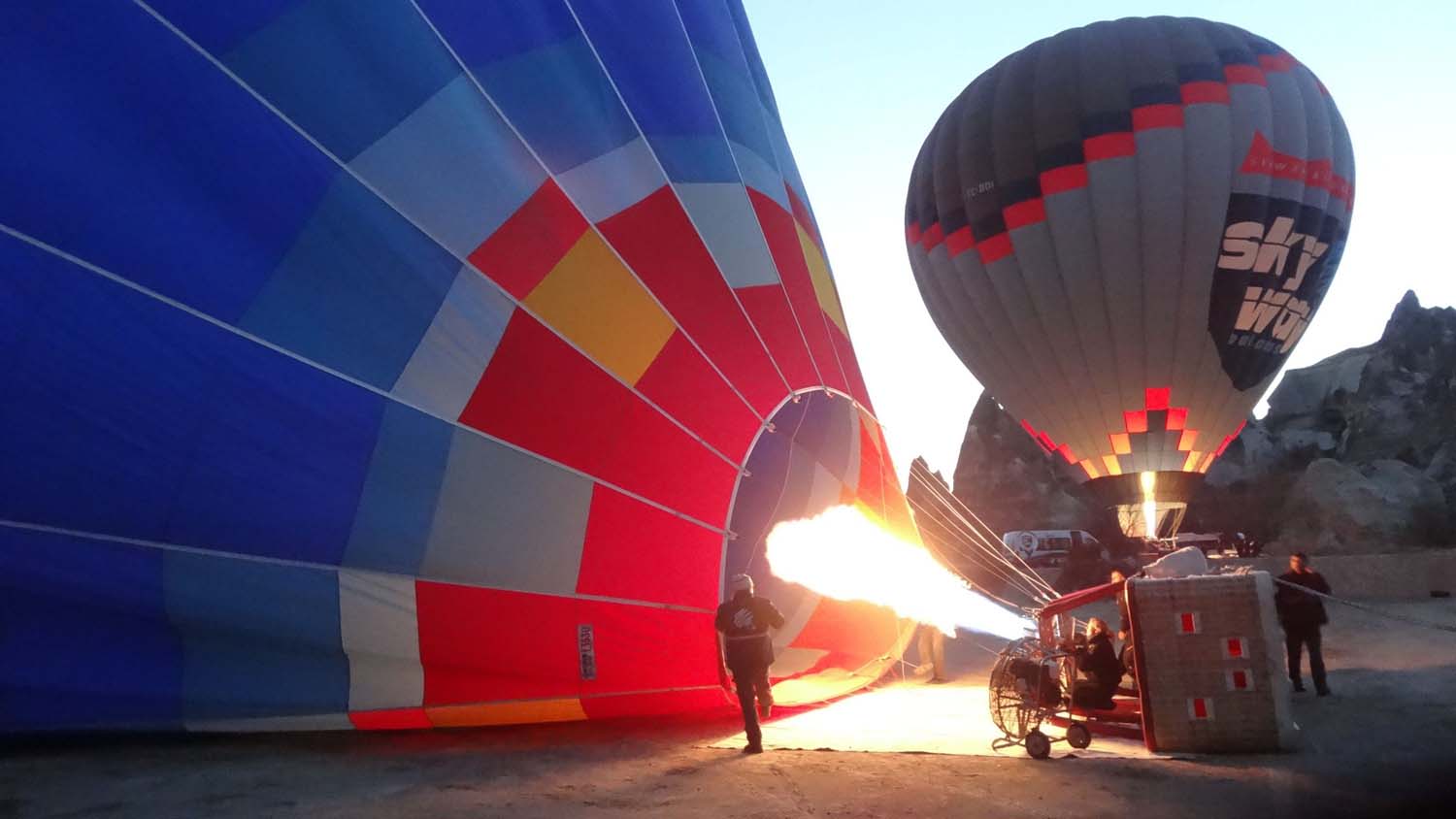 our balloon is nearly full 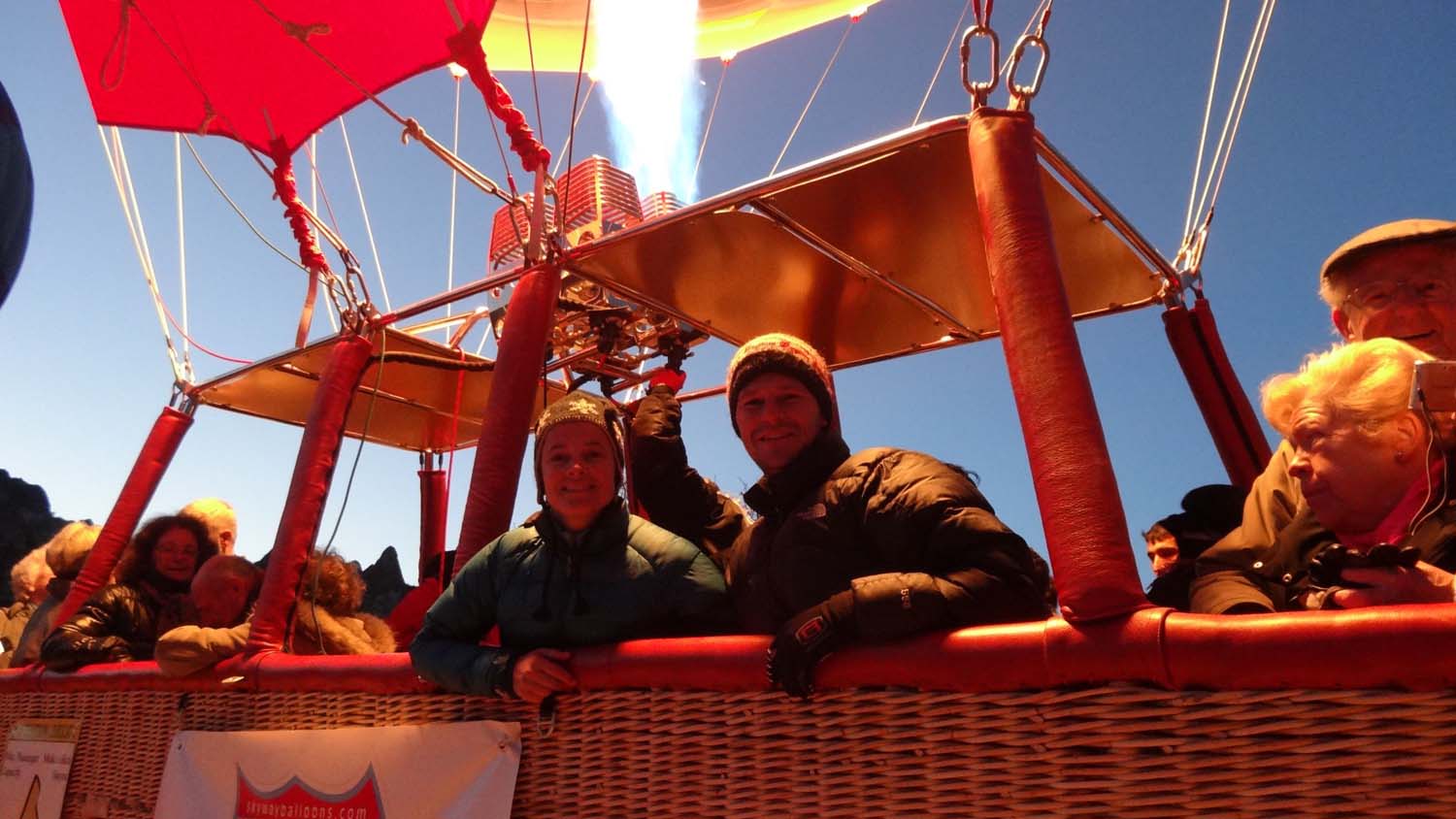 It was beautiful. A perfect sunrise and stunning valleys full of fairy chimneys to enjoy. We had an experienced pilot who was able to read the wind perfectly. She guided us north first, then slightly east, before heading back south again. Doing a u-shaped flight over Rose valley, Love valley and Red valley before slowly descending only a meter or two away from some of the stunning pinnacles very close to where we had camped for the night. 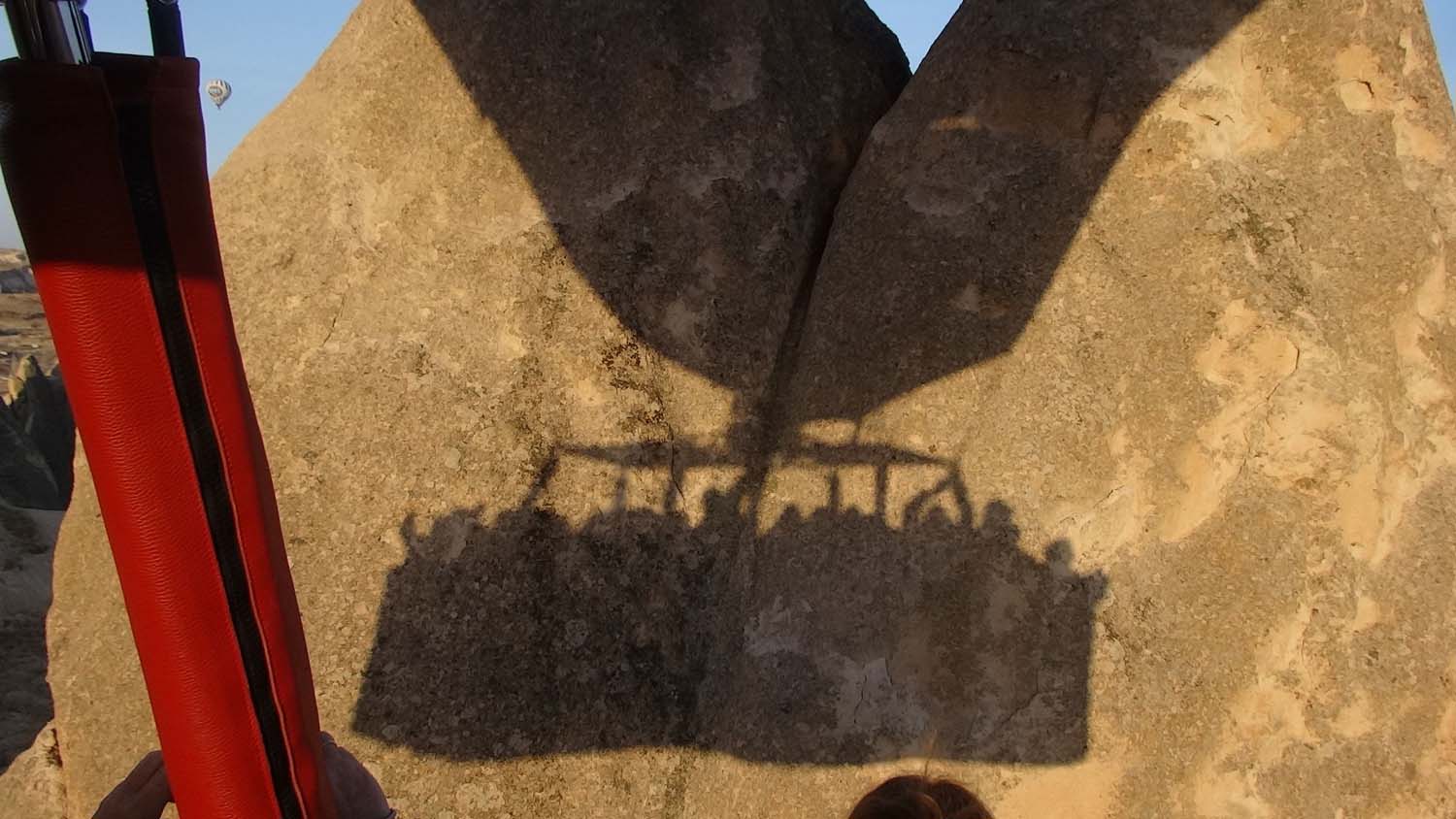 our pilot is an extremely skillful and we float pretty close to the chimneys before landing!

Champagne was popped and we toasted on a successful flight, our birthdays and our amazing trip. 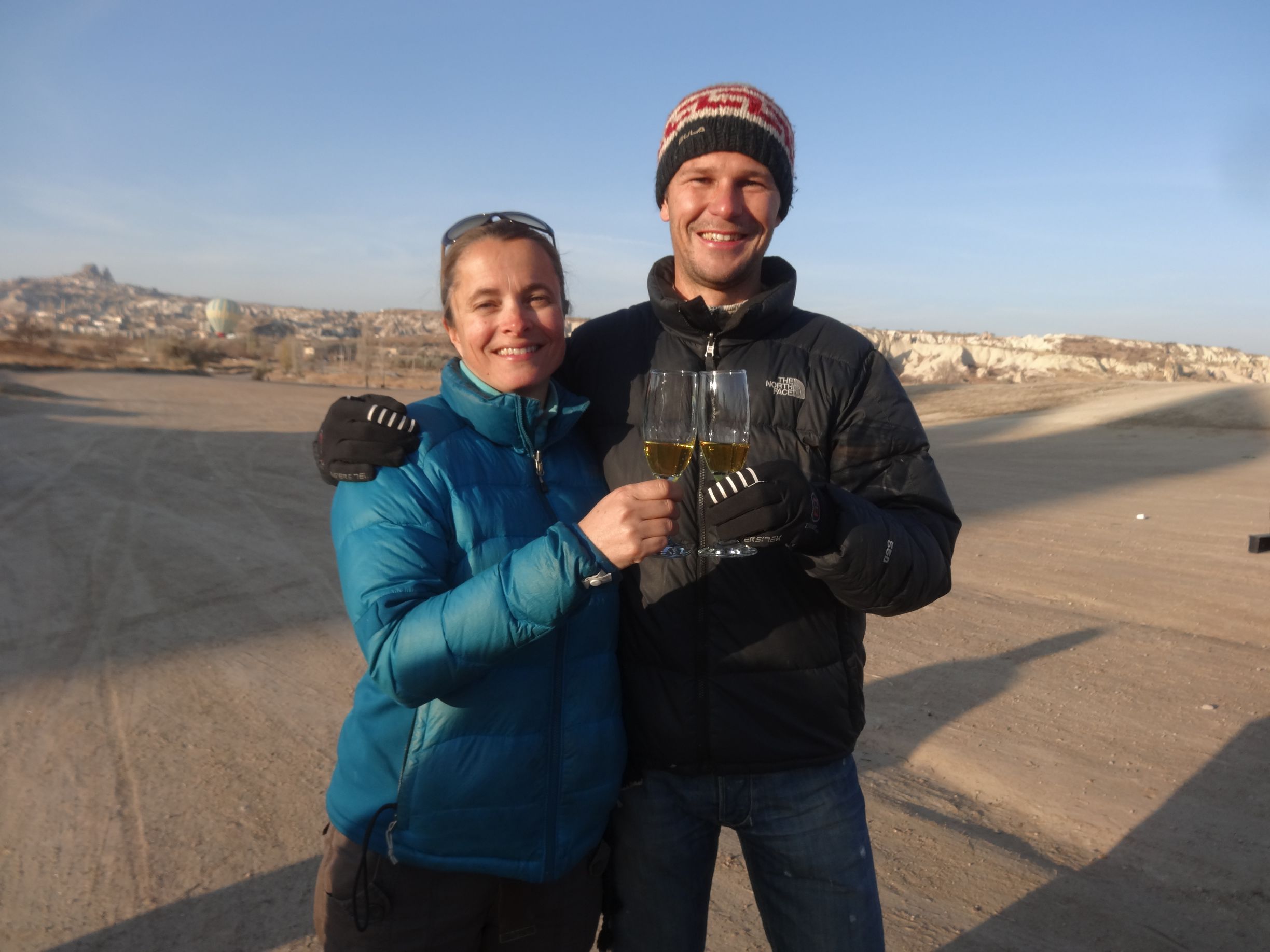