Are you ready for the afterlife?

When in China, one must visit the extravagant site for the afterlife of the first emperor of the Chin dynasty. A serious show of power and megalomania.

We’re of course talking about the army of terracotta warriors standing guard over emperor Qin Shihuang’s tomb near Xi’an. The same guy who ordered the building of the Great Wall, he must have had a passion for doing things on a grand scale. He was 13 years old when he started his rule in 221 BC and died in 207 BC.

It is impressive, very impressive. Walking into the first hall where hundreds of warriors made of clay are still standing guard, looking like they are ready to go to war any minute, is simply impressive. Discovered in 1974 by a farmer digging a well on his land, they are still excavating the pits and putting pieces of warriors, horses, archers and chariots together. You can see the archeologists working on site. 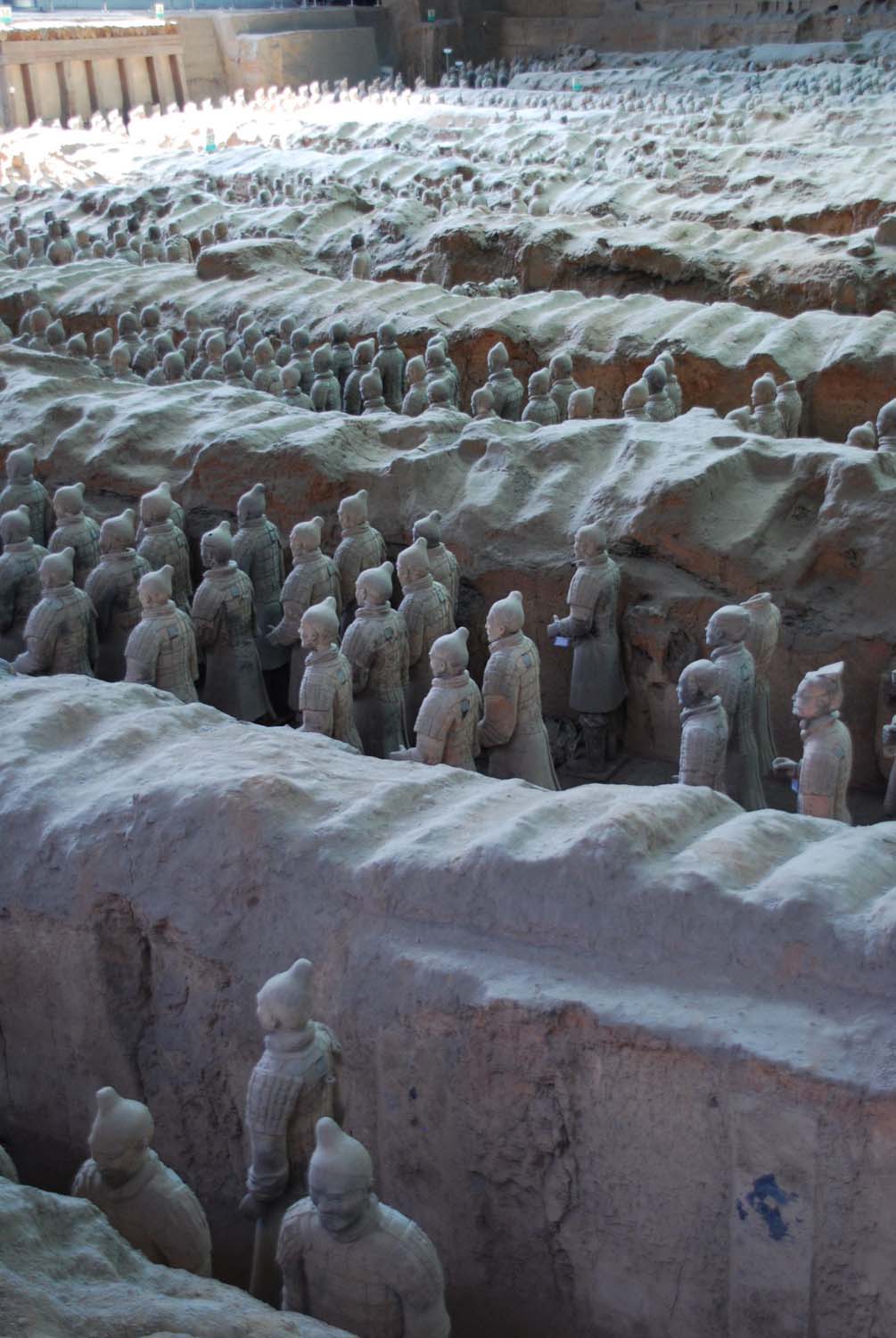 so many of them, a seriously impressive sight 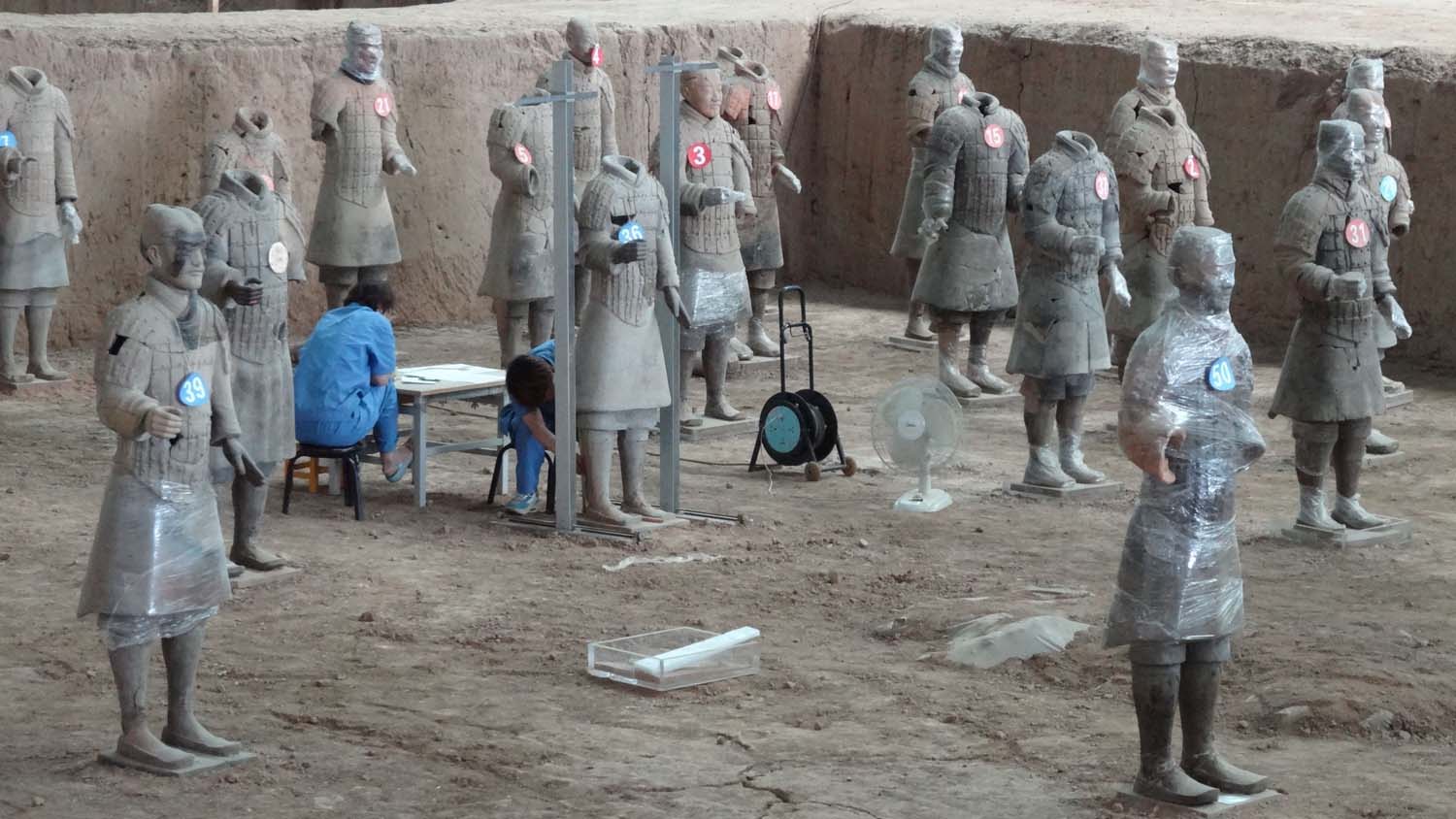 What most people don’t know is that every single warrior, horse, etc was painted. But after unearthing each piece it would quickly fade and lose its colour. They are now trying to find ways to stop this from happening and are waiting with excavations until they have a solution. They probably have enough dug out warriors to work on for now anyway. 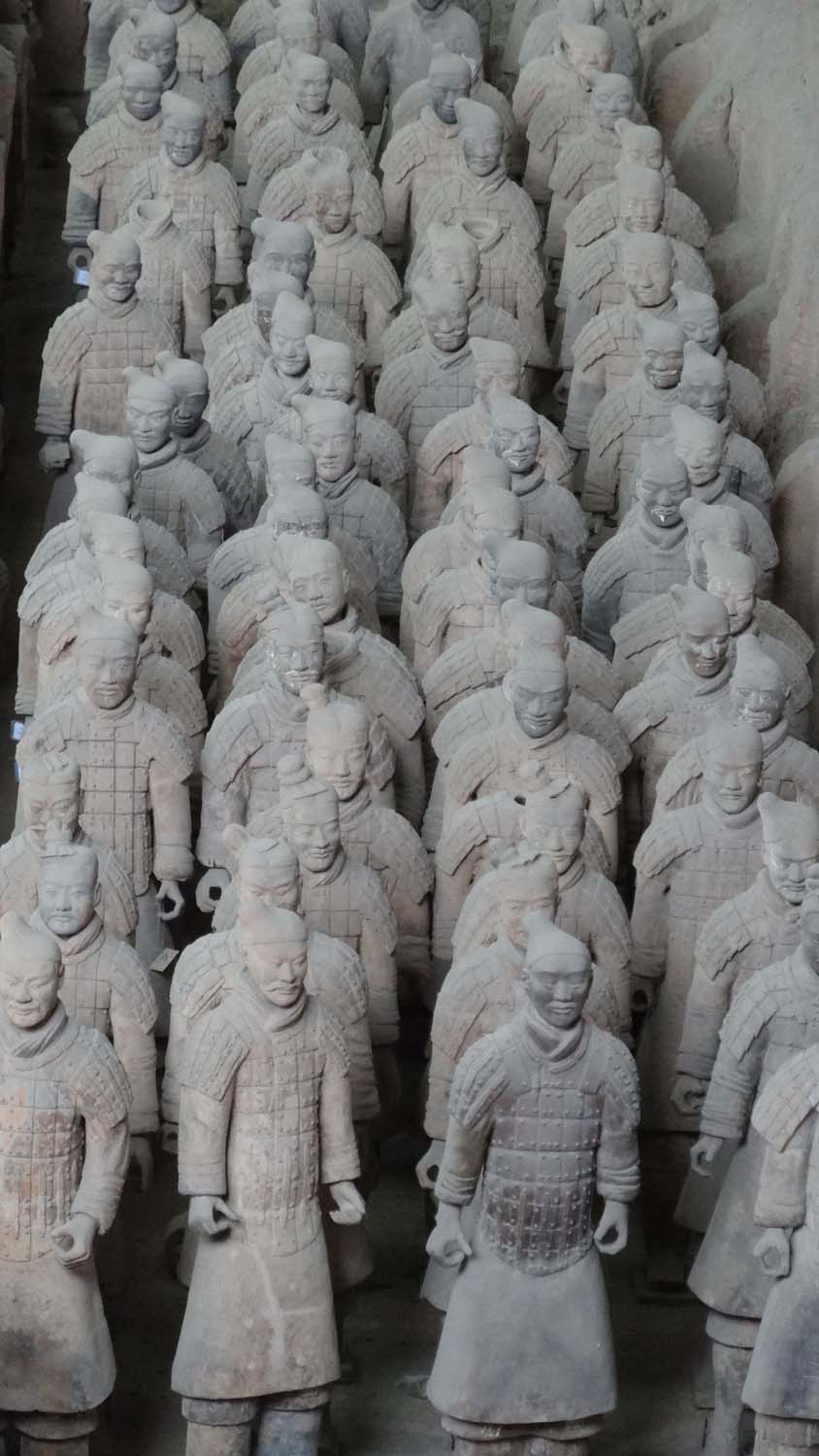 they are all life-size, quite tall for Chinese as they were all selected for their height 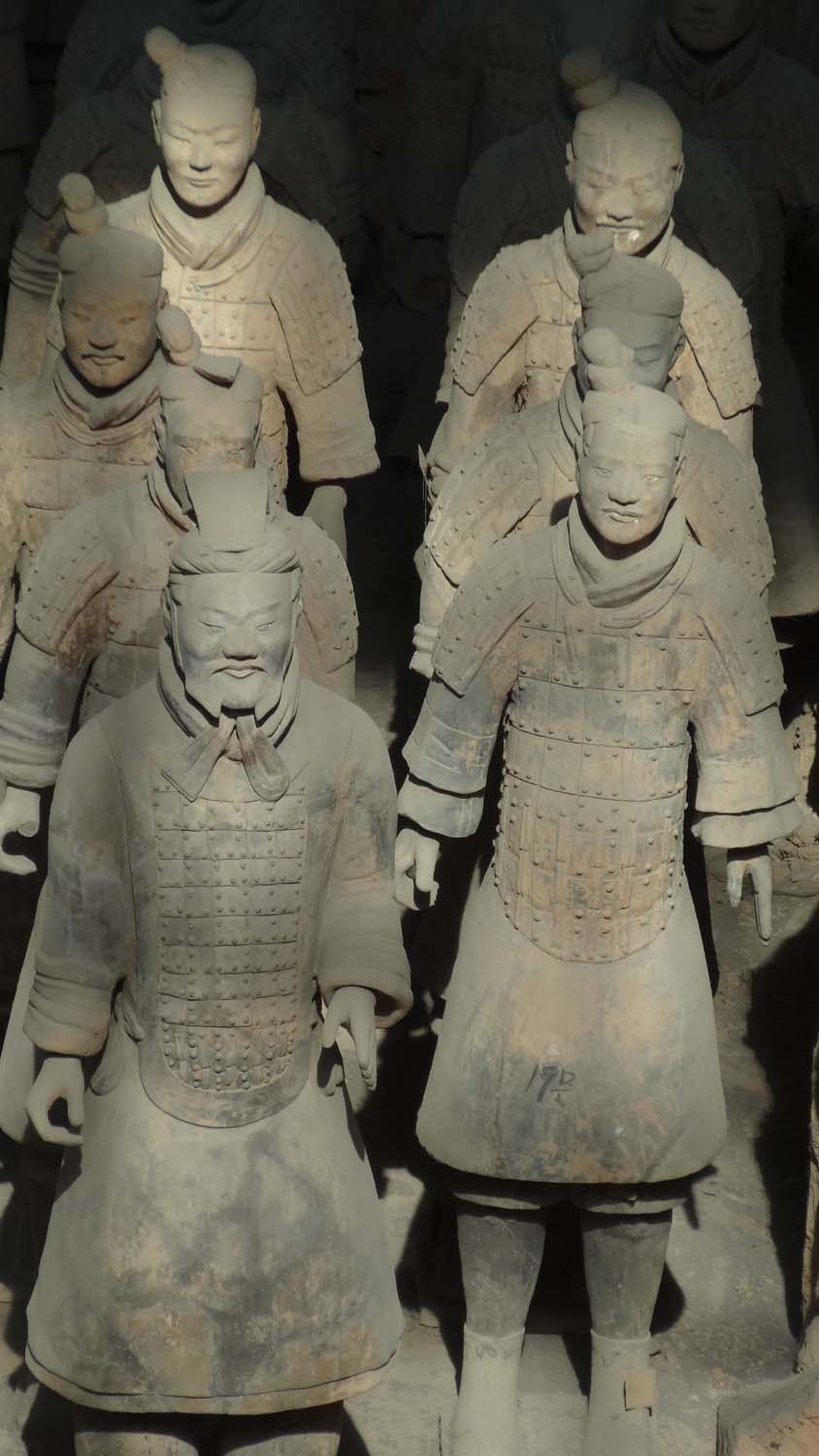 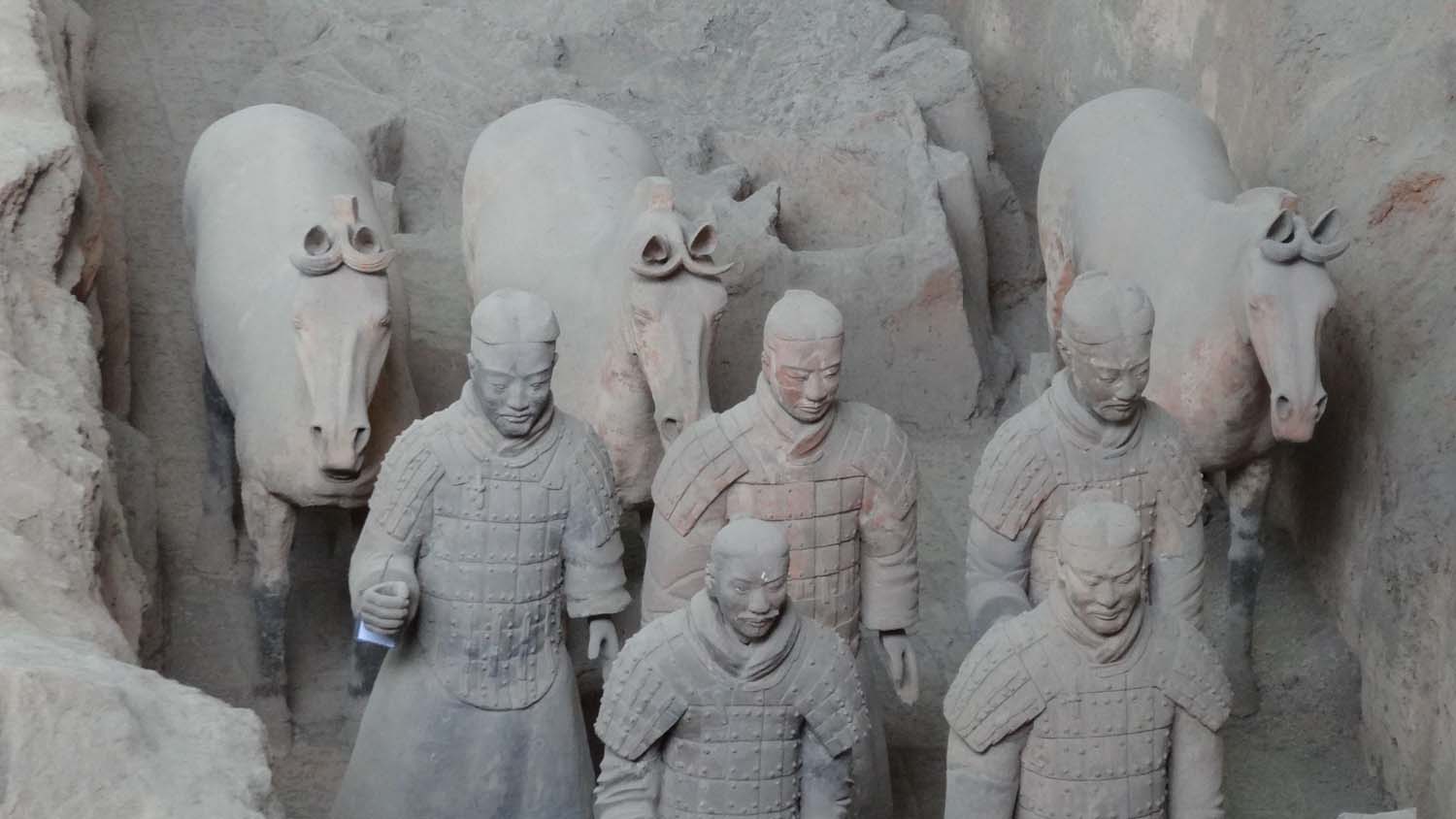 all ready to go to war for their dead emperor 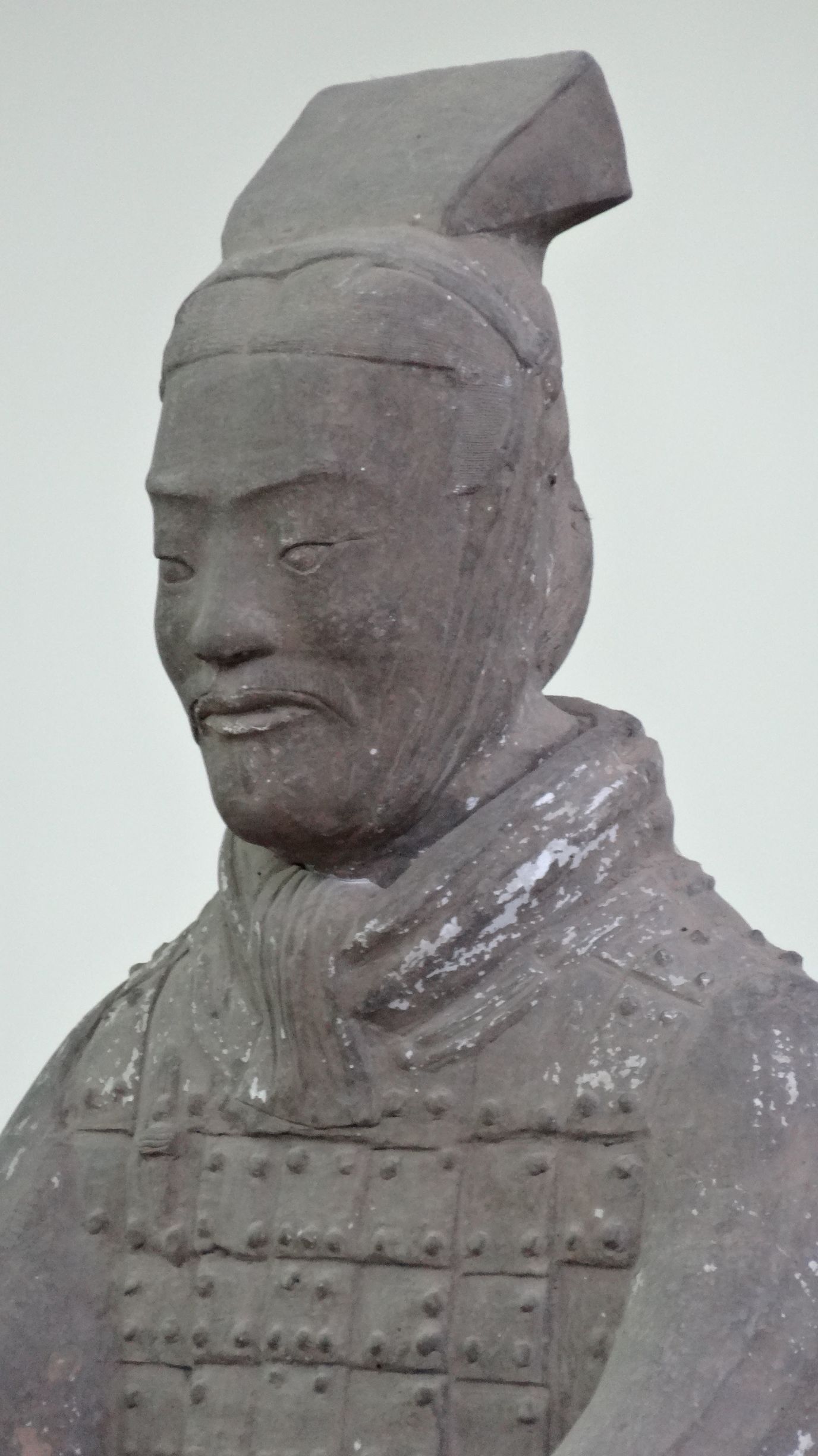 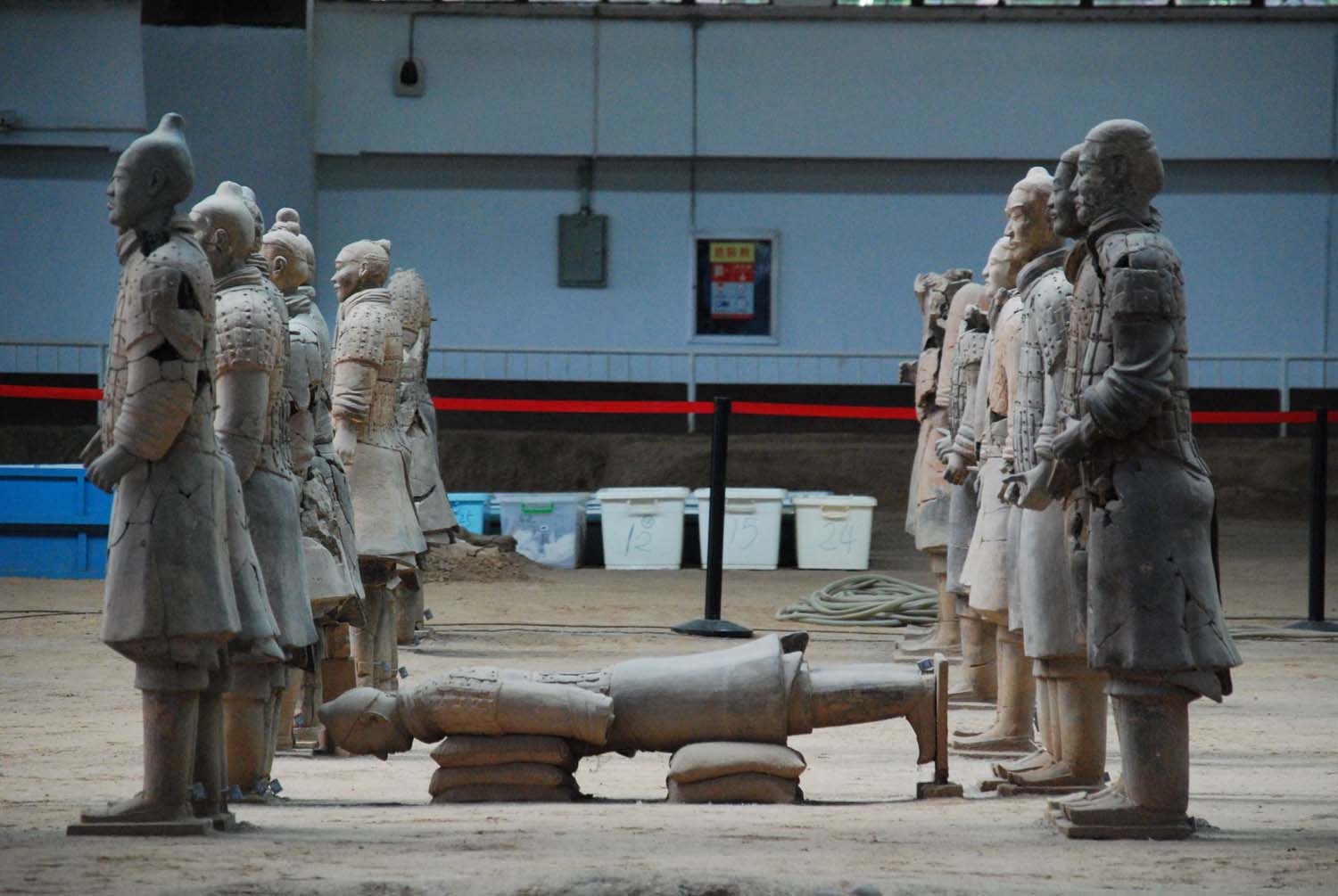 we didn’t realise planking goes back such a long time!

They also used to hold a real weapon each, but soon after his death these were plundered by a rival ruler at war. The majority of the damage to the warriors was however caused by a huge earthquake about 500 years ago, otherwise many more warriors would have survived in one piece. 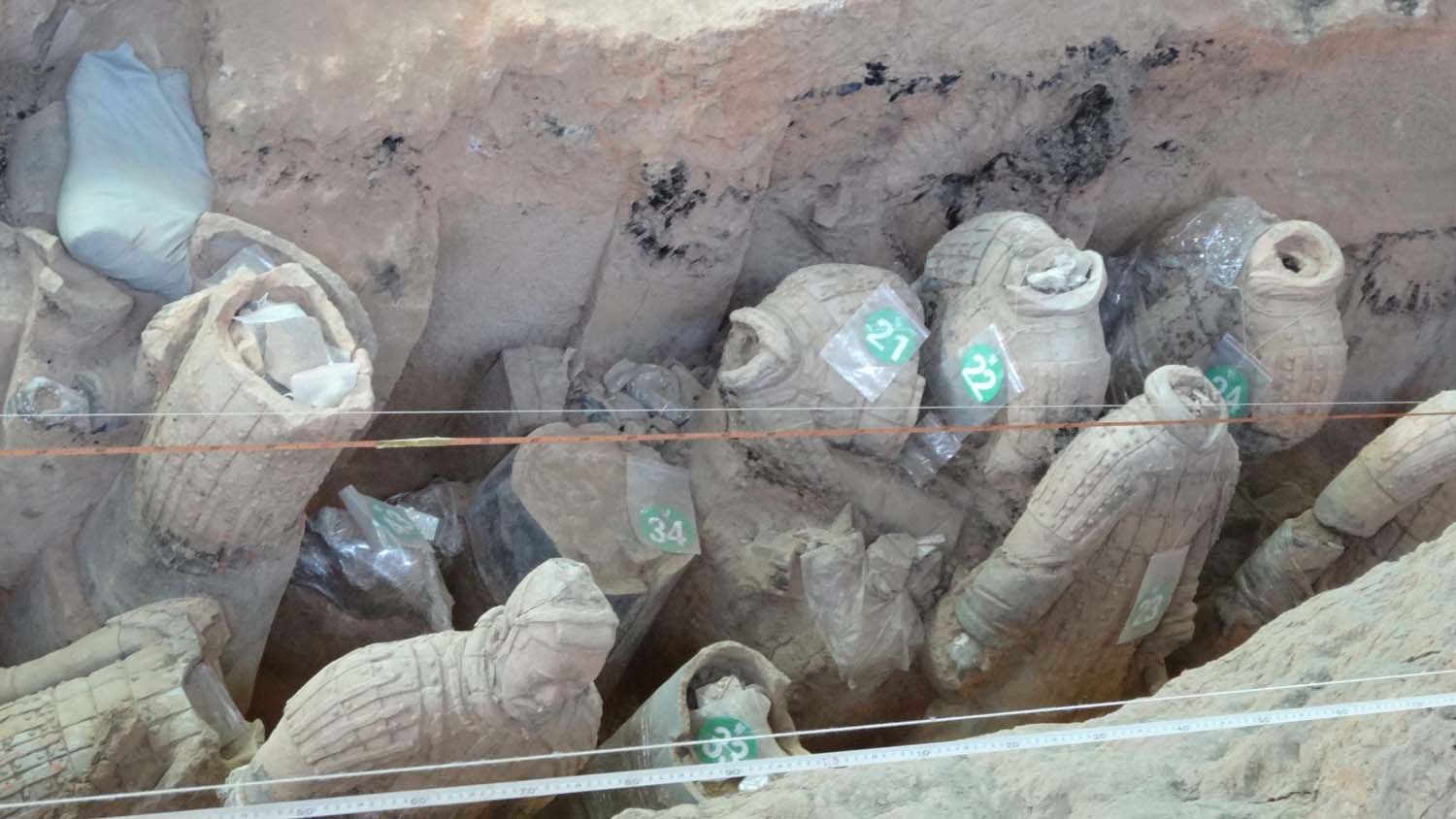 Apart from the 3 pits with the warriors they have also dug up other areas with items for the emperor’s afterlife, including 2 bronze chariots complete with 4 horses each. They are about half life-sized and beautifully made. 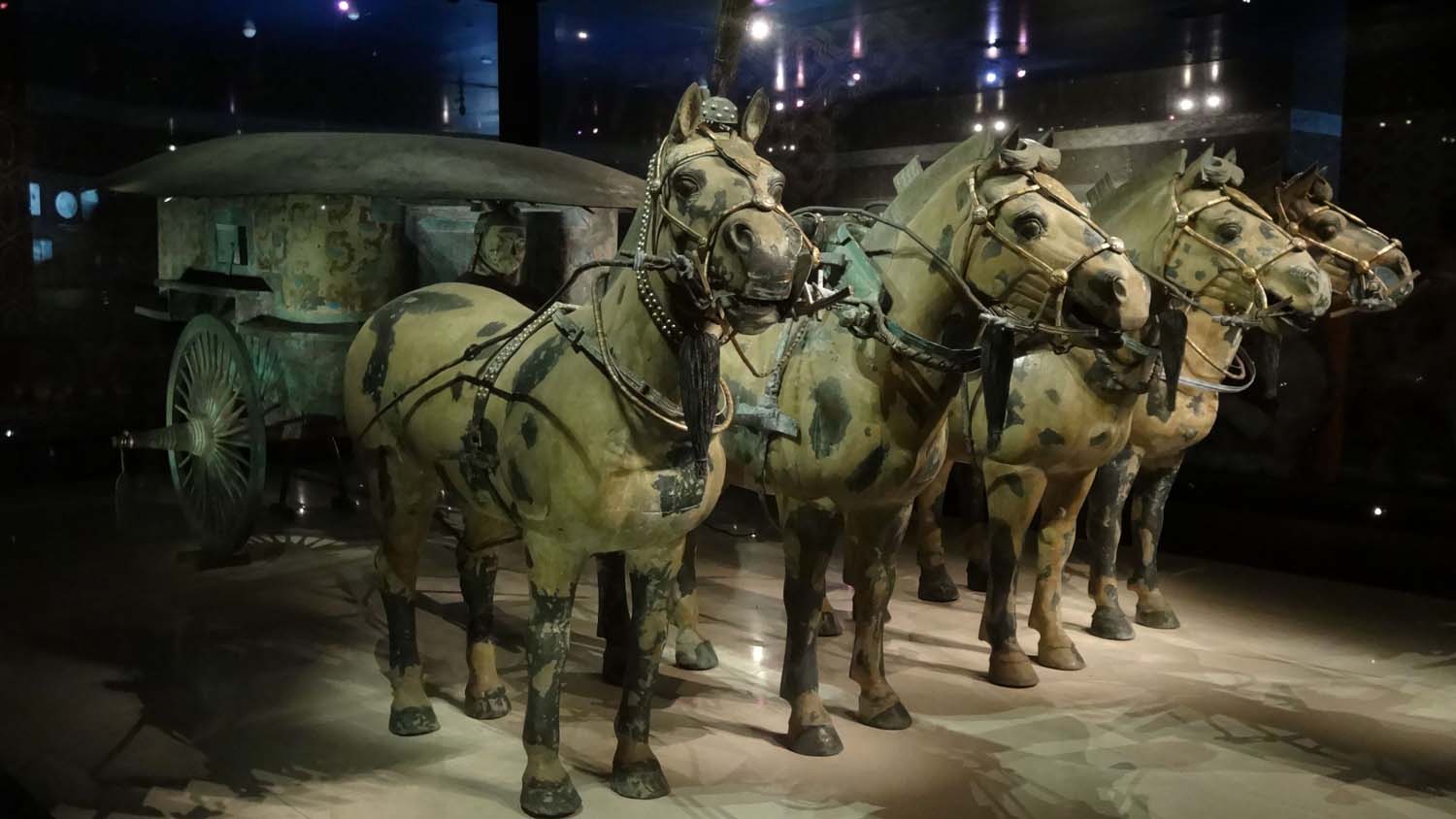 one of the bronze chariots with 4 horses

Near Beijing are 18 Ming tombs spread over a large area and connected by the Sacred Way, a road lined with beautifully carved, white statues of elephants, horses, camels, etc. This is where all but 3 of the Ming and Qing emperors were laid to rest with everything they could possibly need for the afterlife.

Unlike emperor Qin Shihuang’s tomb which had the entire terracotta army prepared for his afterlife, the Ming tombs and their treasures are relatively modest as they seem constricted to just the things he took with him into the tomb itself. 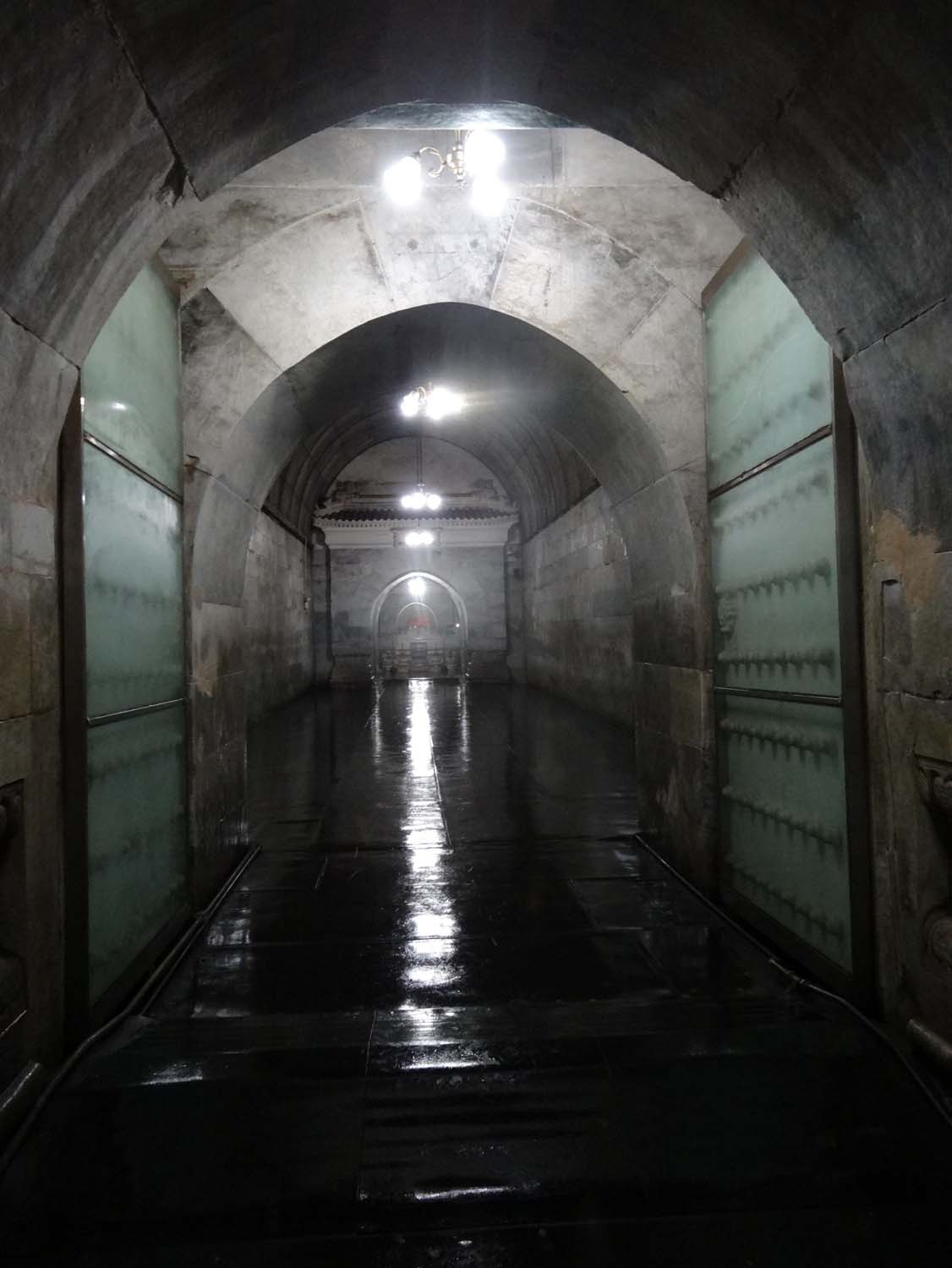 the inside of the tomb

They have only opened 3 of them to the public, but only one allows you to go into the underground chambers of the actual burial mount; the Ding Ling tomb from emperor Ding. That’s the one we wanted to visit.

As we had camped near the Great Wall of Badaling the previous night, we decided not to drive back south towards Beijing and then head up north again to the Ming tombs. Instead we would loop around the north side of the Great Wall area. What we hadn’t anticipated was the section of toll road exclusive to trucks… We were turned away! This meant studying the various maps we had to find the detour via smaller, provincial roads. A few hours later than planned we finally reached Ding Ling’s tomb.

The main chamber contained 3 red lacquered coffins, 1 large for the emperor and 2 slightly smaller ones for the 2 empresses who were not allowed to live a happy life after their husband had passed away… The remaining red lacquered boxes were for the things they needed in the afterlife and also included a miniature army, but this one was carved out of wood and the warriors were only about 30cm tall. I guess 500 years ago they already had to start cutting the extravaganza compared to 2000 years ago. 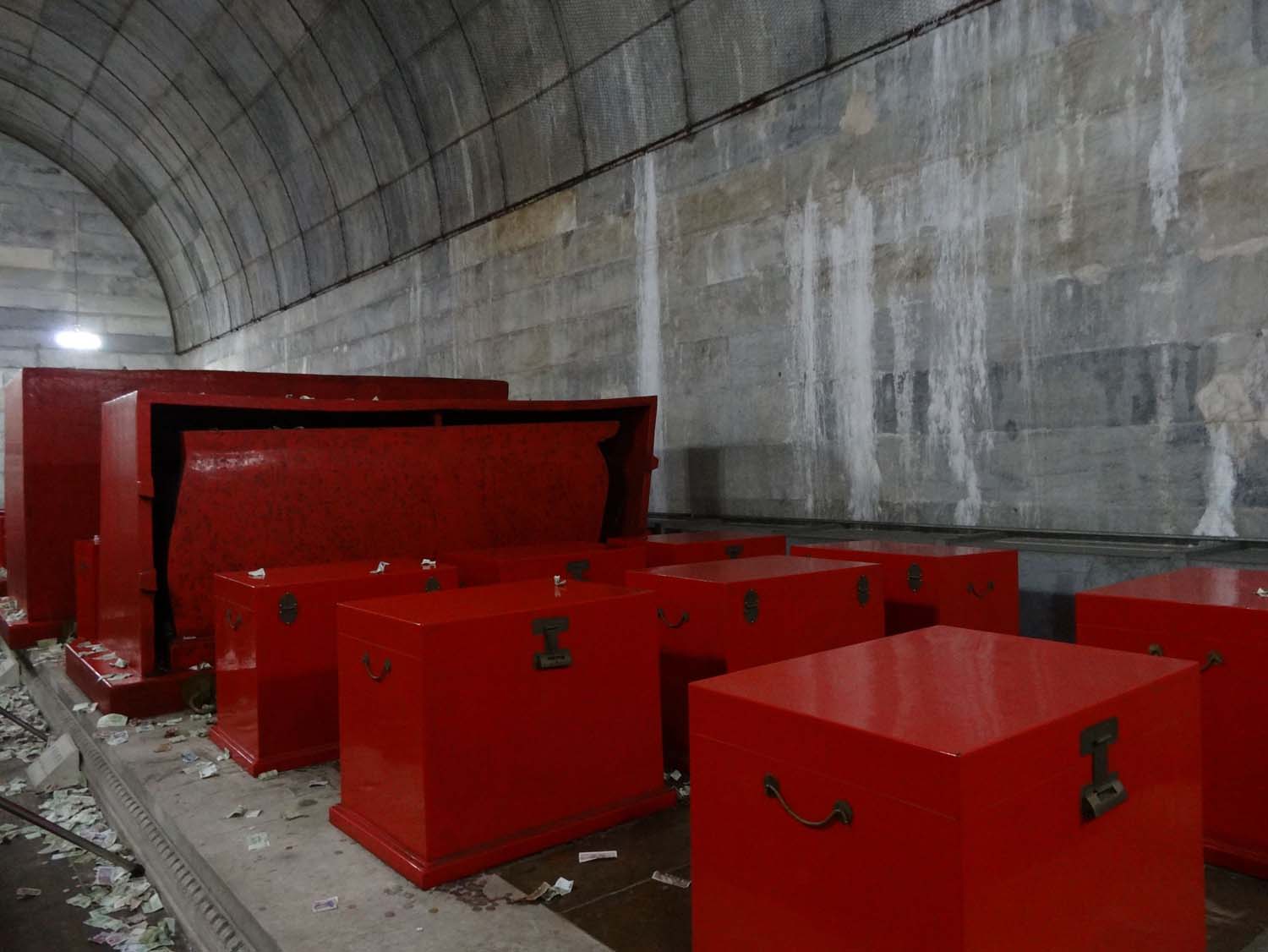 coffins in the main burial hall 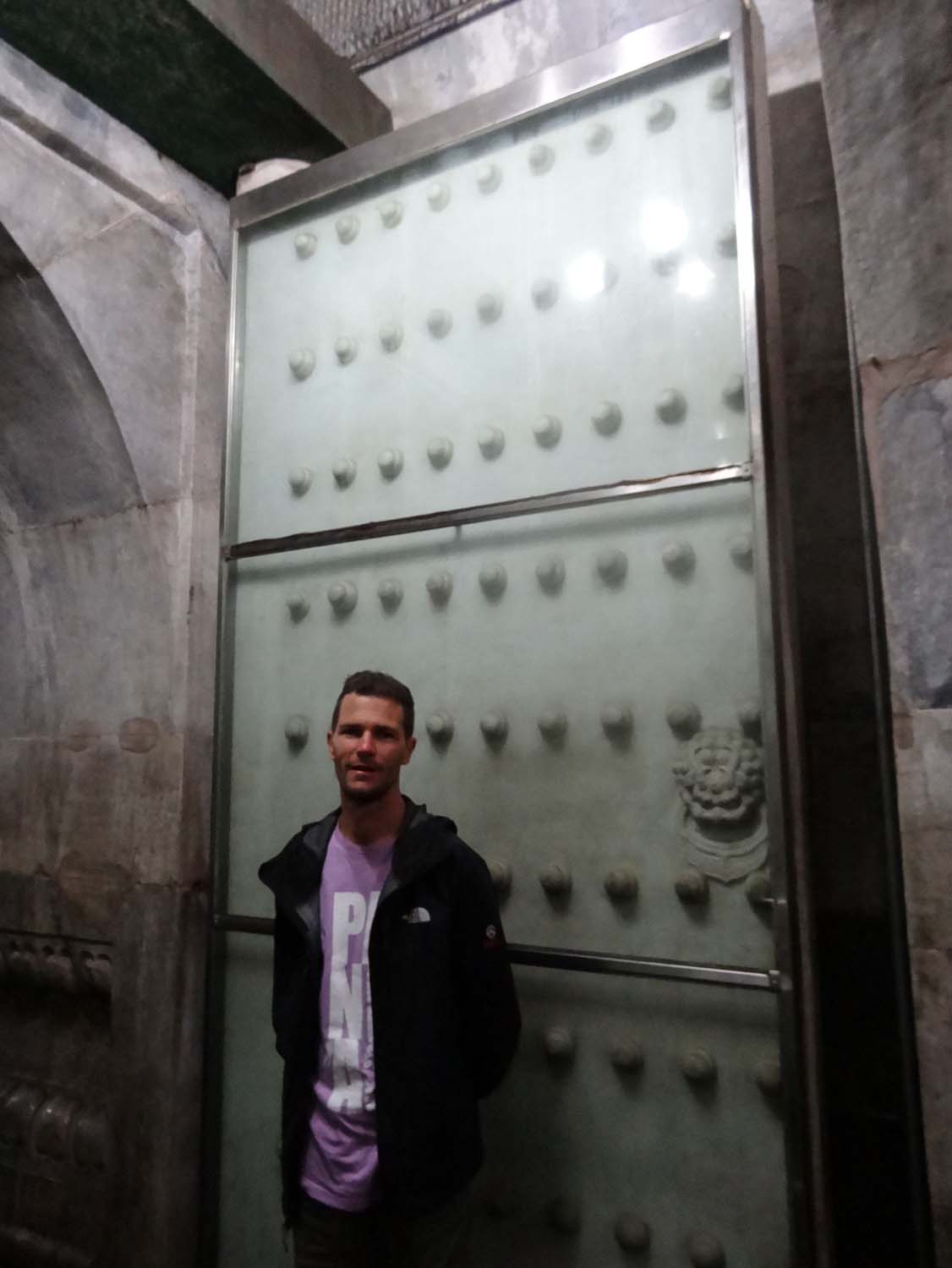