We wish we had some magic like the wizard of Oz so we could simply wave a wand and we’d be in Australia, but alas, a wand like that doesn’t exist yet….

Scooby was getting married to Michelle, so we hopped onto a plane and flew to Perth, our first stop on this very quick trip. We spent a weekend there, catching up with many people. First we had a (very late) lunch with Regine, Eugenie and Helmuth at the beach. Coming from a very hot and humid Dar es Salaam it actually felt a little nippy… 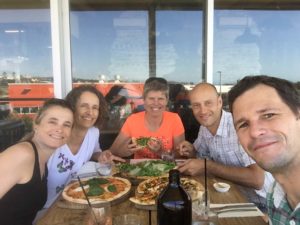 lunch at the beach with Regine, Eugenie and Helmuth

Dinner was a relaxed affair and we managed to catch up with Kat, Marty, Zoe, Clayton & Chiara and Regine again. The next morning we managed to squeeze in a run through Kings Park. It was so nice to be back! And great to see it was quite busy too. After the run we wandered over to our traditional picnic in Matilda Bay. It is a great way to catch up with many people and it is also simply a stunning location to hang out for a few hours. Time flies though and before we knew it, it was already time to pack up. 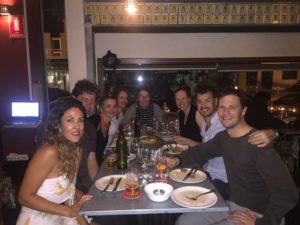 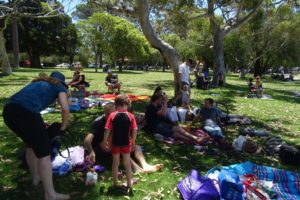 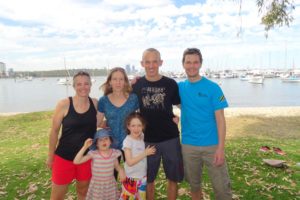 Sean & Tanya are now cruising around Australia with the kids for a year! Great we could catch them just before they left.

As we didn’t manage to catch up with everybody in Adelaide last time, we popped in for a quick visit en route to the east coast. We stayed with Alix and Adrian, played with Gus and met his baby brother Banjo for the first time. These guys are growing up so fast! We didn’t have enough time for our usual hike up Mt Lofty, but over dinner we caught up with Pierre, Linda, Ella, Jo & Michael. 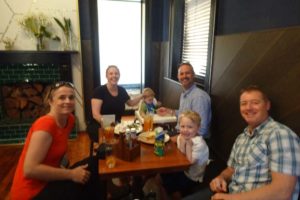 drinks in the pub with Alix, Banjo, Adrian, Gus and Pierre before going for dinner at the Nepalese restaurant (where we forgot to take a photo…)

Another hop further to the east brought us to Brisbane. Another super quick stop, but we still managed to catch up with lots of people and Jude even managed to do some shopping whilst Jon spent another morning at work. Dinner in West End meant we briefly saw Fee, Marjolein and Mel (where we spent the night so we had a leisurely breakfast with them as well), Josso (Scooby’s brother so we would see him again at the wedding), Daniel and Jonno. 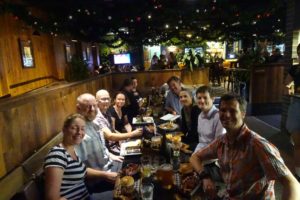 dinner and drinks in Brisbane with Marjolein, Mel, Jan, Jeanet, Josso and Daniel. Fee and Jonno had already left. 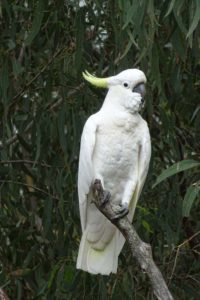 But, some of our friends now no longer live in Brisbane… so if we wanted to catch up with Jonno and Angie, Todd and Jenn and Sally, we had to head up north further, all the way to Buderim. On our way up we had time to pop in at Guy and Cheryl’s place who were kind enough to host us and Rob and Robyn again for a few hours. Always great to see them all and hear their stories of past adventures and plans for the next stage of their amazing travels. 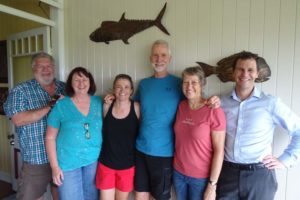 catching up with Rob, Robyn, Guy and Cheryl in Sandgate

Jonno drove up with us, so he could give us directions and soon we were receiving many, many hugs from our amazing crew. It was so strange, but yet so normal and comfortable to step into Todd and Jenn’s new home. Angie and Sally were already there too and it felt just like the good ol’ Tuesday evenings. We (Jenn) cooked a delicious meal, and just talked a lot. It was magic. 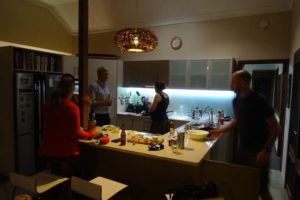 dinner is being prepared in Todd & Jenn’s place 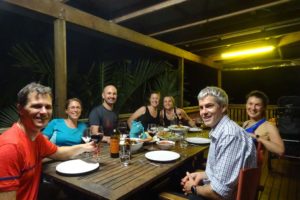 Jon, Sally, Todd, Jenn, Jude, Angie and Jonno on the deck for great food and great catch up

After spending only one night it was time to say goodbye already. We were off to Sydney where we would of course catch up with Simon. Katie also joined for a lovely paddle. It was another short catch up as the next morning we had to continue to the wedding venue in Ku-Ring-Gai Chase NP, not far from Sydney. Scooby and Michelle had picked this absolutely stunning location for their wedding and we were very happy we could be there. 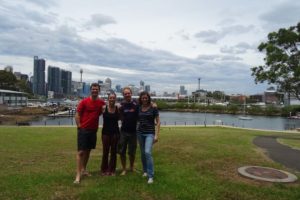 Jon, Jude, Simon and Katie in Sydney after a lovely paddle through the Sydney harbour

It was a little damp that day, but luckily the venue managed to keep us all dry during the ceremony. From the yacht club we didn’t have to walk far for the next part of the celebrations, a delicious five-course dinner at the Cottage Point Inn. 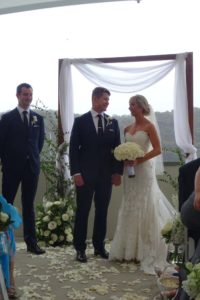 Scooby and Michelle about to tie the knot 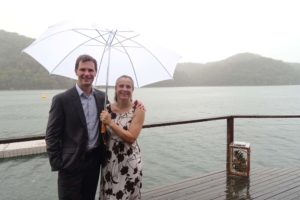 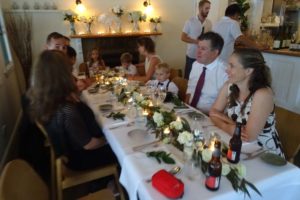 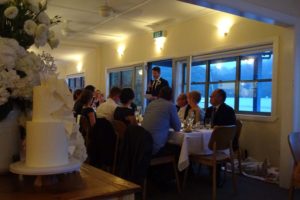 The next morning the sun was shining and we went out for a run in the Ku-Ring-Gai Chase NP before joining newly weds Scooby & Michelle, and Josso (his brother) & Edith plus kids for breakfast at the little café by the water. We only had a few more hours of relaxing before we head to drive back to Sydney for our flight. 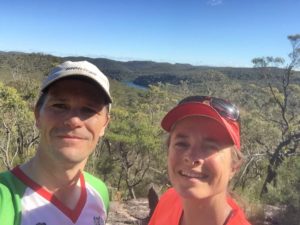 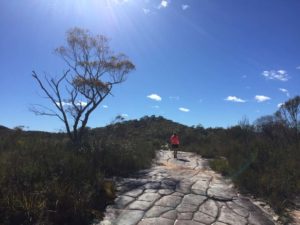 Jude on the stunning Waratah track 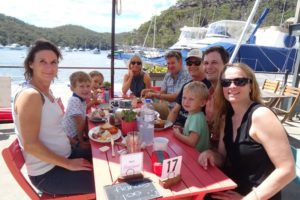 breakfast the next morning with Edith, the kids, Michelle, Josso and Scooby

We somehow managed to connect to Jez who now lives in Sydney, pretty much on the way to the airport for us, so we popped in for a cuppa and a super short catch up. 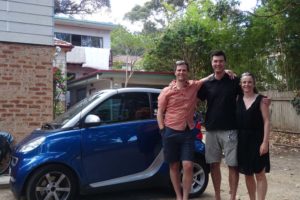 catching up with Jez in Sydney, the shortest guy with the biggest car… (no more combi!)

It was time to start the long haul flight back to Dar es Salaam, this time luckily without delays to get to Perth so we made all the connections without running. Hopefully next time we will have more time to see everybody!